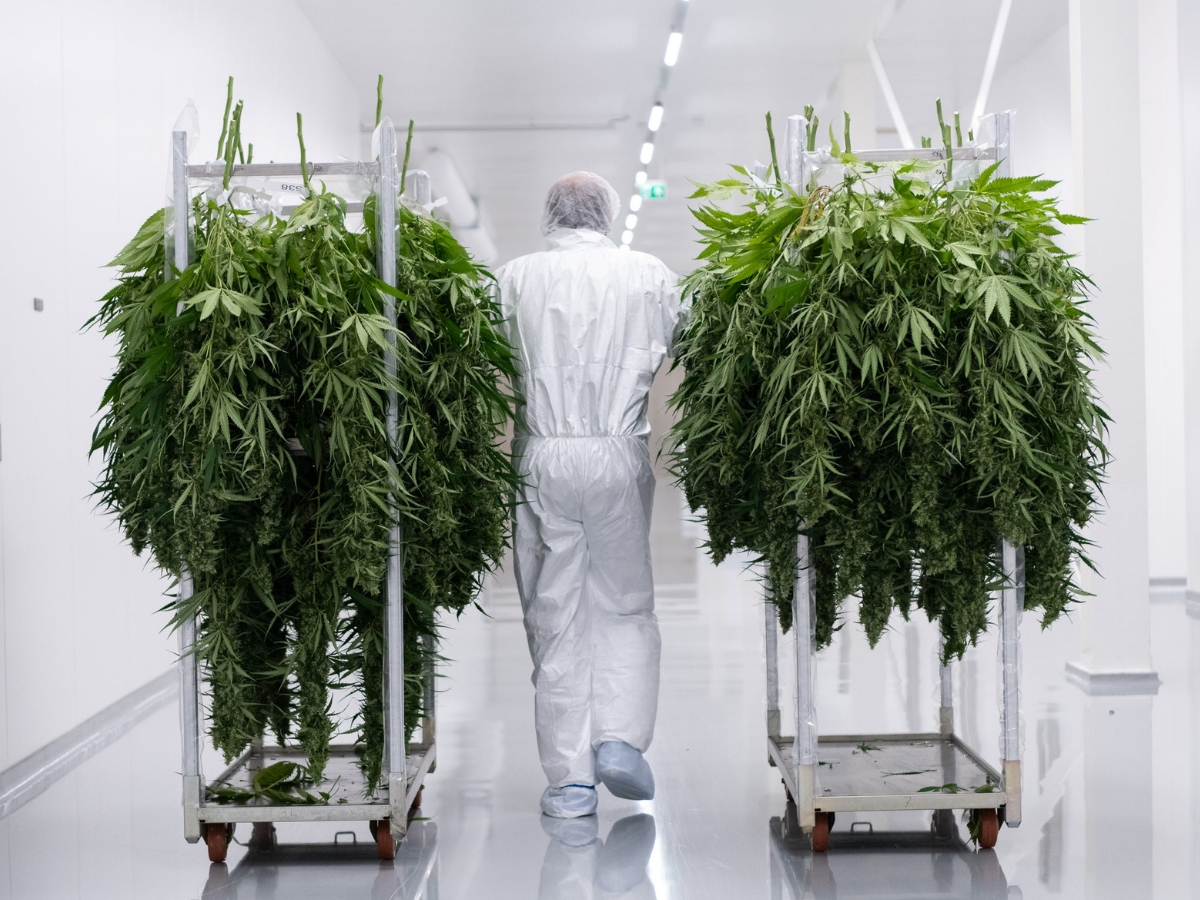 A worker at Bedrocan’s Emmeloord facility.(Photo courtesy of the Dutch Ministry of Health)
By Derrick Bergman | Published: December 13, 2018

The first Cannabis Capital Convention was held this past September in Amsterdam, and one of the highlights was the presentation by leaders of Dutch cannabis producers Bedrocan. Co-founder and CEO Tjalling Erkelens, along with chief financial officer Mauricio Agudelo, began by debunking a persistent myth regarding the origins of the company’s name.

Legend had it that the company was named in honor of Ben Dronkers, the founder of Sensi Seeds and the Hash, Marihuana and Hemp Museum — as in BEn DROnkers CANnabis. It’s a good story, but it’s not true. Bedrocan actually refers to the names of the two founders, Freerk Bruining (B) and Tjalling Erkelens (E); the Dutch word for dry, “droog” (DRO); and cannabis, natch (CAN).

Regardless of the origin of the company’s name, Bedrocan is a true pioneer in medical cannabis. Upon founding the company in 1984, Bruining and Erkelens initially grew chicory, herbs and potted plants indoors before experimenting with their first batch of cannabis seeds in 1992. Soon after, they decided to focus exclusively on medical marijuana.

The Netherlands introduced its famous tolerance policy for cannabis in 1976, but it wasn’t until 1999 that the government started a medical cannabis program. At that time, there were four companies and organizations that were growing and supplying medical-grade cannabis to thousands of patients. This was technically illegal, but it was tolerated by authorities.

Most prominent among these early pioneers were MariPharm in Rotterdam and the Institute of Medical Marijuana (SIMM), founded by James Burton, a Vietnam veteran from America who fled to Holland in the 1980s. Per the United Nations drug treaties, the Dutch government set up the Office of Medicinal Cannabis (BMC) to be responsible for the production of medical cannabis and to provide dispensations from the Dutch Opium Act that growers require.

Bedrocan, MariPharm and SIMM initially received dispensations, and history was made in September 2003 when the first fully legal medical cannabis went on sale in Dutch pharmacies. But Bedrocan was soon left as the sole legal producer of medical cannabis in the Netherlands when MariPharm and SIMM lost their dispensations within two years. Burton was particularly outspoken against the BMC and predicted that the medical cannabis program would become a fiasco. Indeed, sales lagged far behind expectations, the weed in the pharmacies was expensive, and for years there was only one strain available. Bedrocan was struggling to survive, selling no more than around 154 pounds annually.

The company was — and still is — between two fires. On one side, there are the patients who want more — more strains, more research, and more products like oil, tinctures and concentrates. On the other side, there’s the BMC, which seems to want to keep medicinal cannabis as small and as limited as possible. 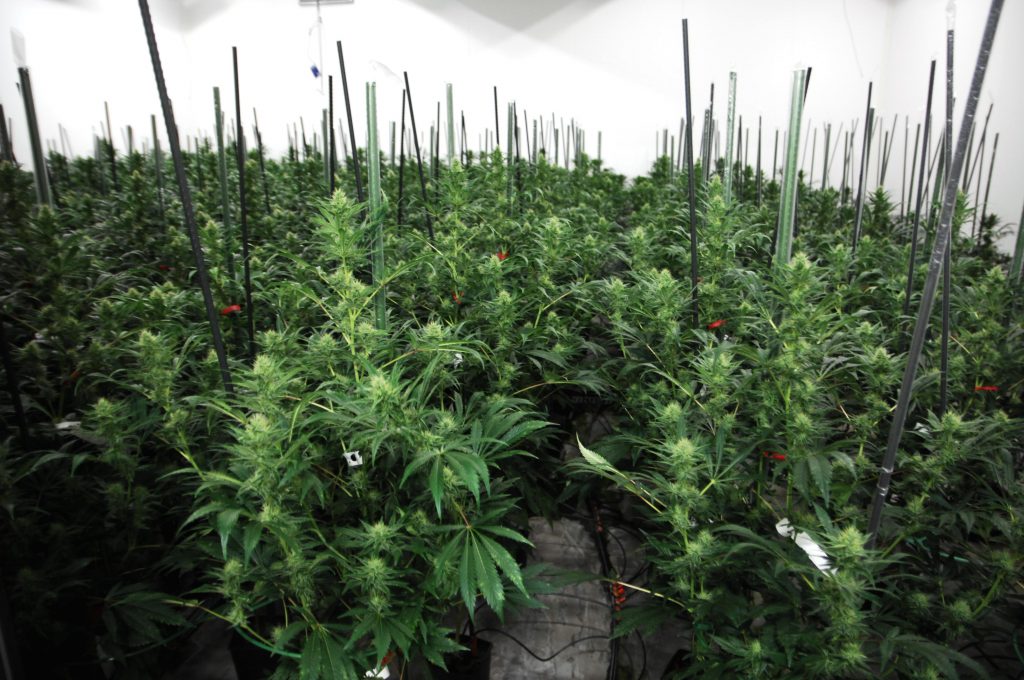 There was some improvement in 2009 when Bedrocan received approval to increase the number of strains it produces, so the team worked hard and kept a low profile at the grow facility in Veendam, located in the northeast of the country. The work resulted in five trademarked Bedrocan strains:

Two things are central to everything Bedrocan does: Standardization and quality control — both essential to delivering consistent quality. It took Bedrocan years to get it right, just as it took years to develop placebos for each of its five varieties.

2013 represented a crucial time for the company, with more and more countries legalizing medicinal cannabis and many of them ordering it from the BMC, which in turn ordered product from Bedrocan.

To accommodate the growing demand, Bedrocan opened a second grow facility in Emmeloord in 2016. The company produced more than 2,300 pounds of cannabis that year, roughly half of which was sold in the Netherlands and the rest exported. Production doubled to more than 4,400 pounds last year, mostly in response to a new contract with Germany for 1,500 pounds of medicinal cannabis.

Bedrocan currently employs more than 100 people in the Netherlands and operates 40 grow rooms worldwide, with a total production capacity of nearly 20,000 pounds. The products are available in 18 countries and territories across four continents.

Big Buds recently sat down with co-founder and CEO, “Mister Bedrocan” Tjalling Erkelens, to reflect on the past decades and the future of the company. 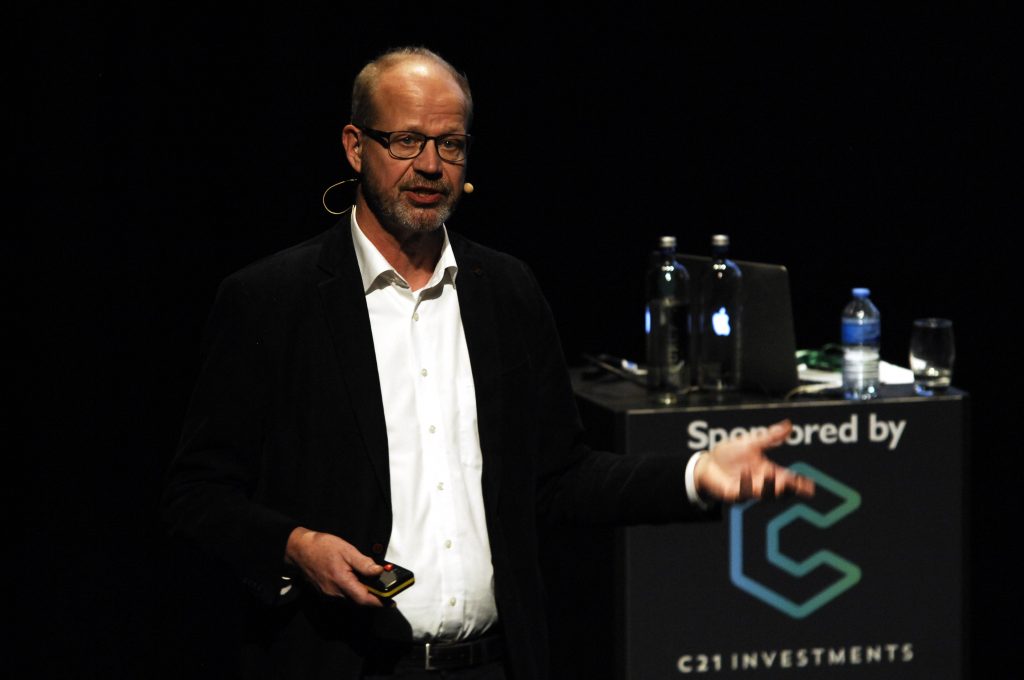 Big Buds: 2019 will mark 35 years since Bedrocan first launched. Has the legalization of medicinal cannabis around the world gone slower or faster than you expected?
Tjalling Erkelens: In the beginning, say, until 2012, it went slower. Then it went at a normal pace, and since 2017 at a much faster pace than I expected.

BB: Bedrocan was granted the Good Manufacturing Practice (GMP) certificate in 2017. How important was this, and why wasn’t it received until 2017?
TE: Since 2008, Bedrocan was already ISO [International Organization for Standardization] certified. At that time, GMP certification for the production of pharmaceutical raw materials did not yet exist. That only came into view somewhere in 2013, so it took us more than two years to achieve this certification. What is unique about it is that it covers the entire process, from clone to packaged product. This makes Bedrocan the first cannabis production company in the world to have a GMP certificate covering the entire cultivation process.

BB: In 2017, Bedrocan accepted the first capital injection from an external investor. Can you explain how this came about?
TE: We had been looking for a suitable investor for some time to be able to finance further clinical research, product development and scale up our production. We’ve always been very critical of the objectives of potential investors. Bedrocan has chosen to only produce cannabis for medicinal purposes and not for recreational use. The investor we were looking for had to meet this objective. When we found the right party and also went through a substantial capacity expansion, we decided to take this step. We are currently considering a subsequent capital injection.

BB: Some patients in the Netherlands are very critical about the gamma irradiation that Bedrocan does, claiming it damages the terpenes in the plant. Why does Bedrocan use gamma radiation?
TE: Gamma irradiation of our cannabis is carried out by our contracting party, the Dutch government. It has been shown that patients, particularly those who have problems with their immune system, may experience harmful effects — and even death — from lung infections caused by certain fungal species, in particular aspergillus, spores of which are regularly found in cannabis. This mainly concerns cannabis that is inhaled. Bedrocan has twice investigated the possible effects of gamma irradiation on the active compounds in cannabis, including terpenes. In both cases it was established that cannabinoids are not affected by gamma rays.

Terpenes have been shown to reduce slightly, so they do not change. The reduction is comparable to the effect of approximately two weeks of aging of freshly dried cannabis. You need to see those two weeks in the perspective of the standard shelf life of cannabis, which is a year, from the moment of harvesting. Within that year, the total decrease in substances is not such that the chemical content of the product falls outside the standard limits.

BB: Many Canadian licensed producers first cultivated only medicinal cannabis, but now also produce for the adult-use market. Why has Bedrocan always ruled this out?
TE: You can’t compare patients to recreational users. Most patients have a low to very low income and are totally not interested in getting high. Multi-year research shows that Dutch patients use an average of 0.7 grams per day. Research by Syqe Medical, among others, has shown that with the right method of administration, most patients would need even less. Furthermore, producers for recreational use are not interested in spending money on clinical research, something we desperately need at this stage. We already see that some producers in Canada, since the full legalization on October 17, have shifted their entire production to the recreational market and patients literally cannot get anything. That is unheard of for a product that should be available to people as a medicine.

BB: The bidding procedure for medical cannabis producers in the Netherlands will restart soon. How does Bedrocan feel about new players on the Dutch medicinal market?
TE: As I have said from day one, please allow competitors to enter the market, for this will result in more quality and lower prices.

BB: What are Bedrocan’s plans for 2019 and beyond?
TE: Expansion of capacity, introduction of a vaporizer that has been approved as a medical device, further expansion, and initiating more clinical research.

BB: If you could give the Dutch health minister one piece of advice on medical cannabis, what would it be?
TE: Follow the current development of cannabis as a medicine in the Netherlands and Europe, and separate it completely from cannabis as a recreational drug. By doing so, you do justice to the needs of both parties — patients and recreational users. We should not follow Canada and the United States, where everything is lumped together now. We’re already getting a lot of complaints from Canadian patients about rising prices, lack of availability of certain products and a decrease in quality, now that medicinal producers have switched to production for the recreational market.

Cold ’n’ Flowers: Why Winter Marks The Perfect Time Of Year For Growing Cannabis Indoors
Growing Up: Top Tips From Industry Experts On How To Scale Your Cannabiz