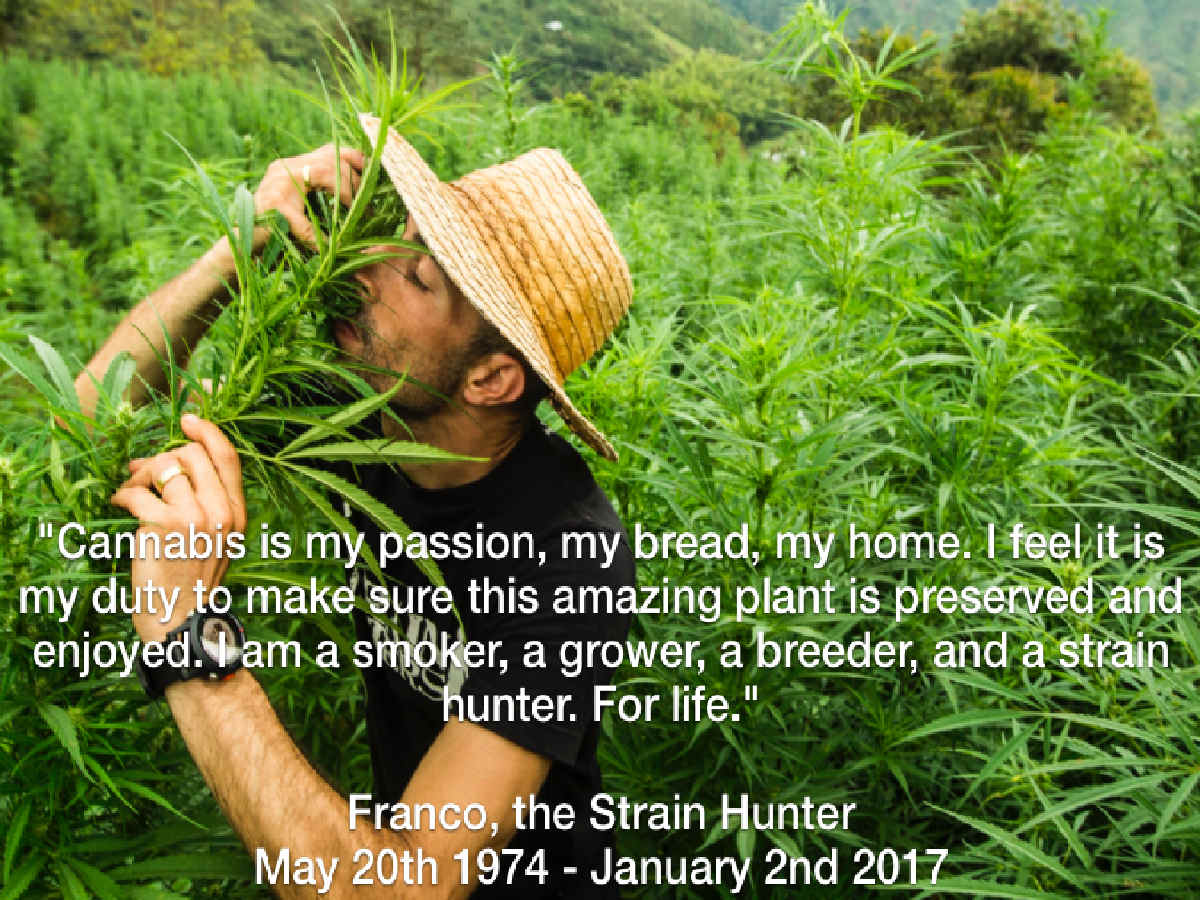 Franco Loja, co-star of the legendary Strain Hunters video series and one of the best-loved members of the international cannabis research and cultivation community, passed away in early January.

He was in the Democratic Republic of Congo making documentaries and doing cannabis genetics research when he died.

Brain malaria is the suspected cause of death.

Franco Loja was a revered person in the cannabis breeding and marijuana video world.

Known for being kind, determined, genuine, and highly intelligent, he was multi-lingual and always energetic.

He was sole creator or co-creator of the many Cannabis Cup strains from Green House Seed Company, which is based in Amsterdam and known for its sophisticated Dutch cannabis coffee shops.

In the Strain Hunters video, which was eventually promoted by VICE media, Arjan and Franco went worldwide to the wildest, most dangerous places seeking landrace cannabis strains and human cannabis cultures.

“Landraces are the most natural form of cannabis existing on the planet because they have been constantly adapting and evolving, improving their harmony with the environment they live in,” Franco wrote. “They are the basis of breeding, and the most ancient pure cannabis races existing on the planet. Landraces have been obeying a basic rule of nature inside their own environment: survival of the fittest. It is our duty to preserve cannabis landraces for the future of scientific and medical research, and for the basic human right to use a plant that has been used for millennia. Landraces could contain cannabis profiles that one day may be used to create new medicines, and these medicines could improve or even save lives.”

He provided expert cultivation advice in an articulate, entertaining way.

Franco Loja was praised as a social and environmental justice advocate who fought for the rights of people against oppression, disease, starvation, and other maladies.

He made frequent trips to malaria-infested Democratic Republic of the Congo despite the dangers of disease and violence, searching for rare genetics, and educating Africans about using CBD (cannabidiol) to fight malaria and other health problems.

His sudden death shocked Arjan and the rest of the cannabis community, and he leaves behind a void that can never be filled.

Eljay Bond., the Global Cultivation Manager for marijuana hydroponics nutrients manufacturer Advanced Nutrients, was on a cannabusiness trip in Europe in early January when news of Franco’s death was first released.

“Everybody describes Franco as an unusually courageous, open, friendly, intelligent man who loved cannabis more than life itself. You see in his videos and writings, and in the great strains he created, that he was a hero in the cannabis world. People in the marijuana community are devastated. In Amsterdam, there’s deep sadness all over the city because of Franco’s death,” Eljay said.

We’ve included many of Franco’s videos in this article and after the article text.

If you want to add your voice to the many who are memorializing Franco Loja, visit this Green House Seed Company webpage.

“With great sadness I have to inform the world that my dearest brother passed away.

The world’s biggest marijuana icon lost his life due to brain malaria fighting for the poorest people on our latest project in Congo.

Franco will be remembered as the most passionate, dedicated, and knowledgeable person our industry has ever had.

His passion and dedication were unheard of in the history of our industry. For 17 years we had the best time of our lives traveling and growing in the most crazy parts of the world and spreading the message of cannabis.

He was my soul mate, brother, partner, and best friend and one of the nicest persons I ever met.

It was his duty to preserve this plant for future generations and make it acceptable all over the world especially through our strain hunters documentaries.

Life without him is nearly unthinkable, but knowing him very well, he only had one wish— and that is that all of us will continue his legacy.”