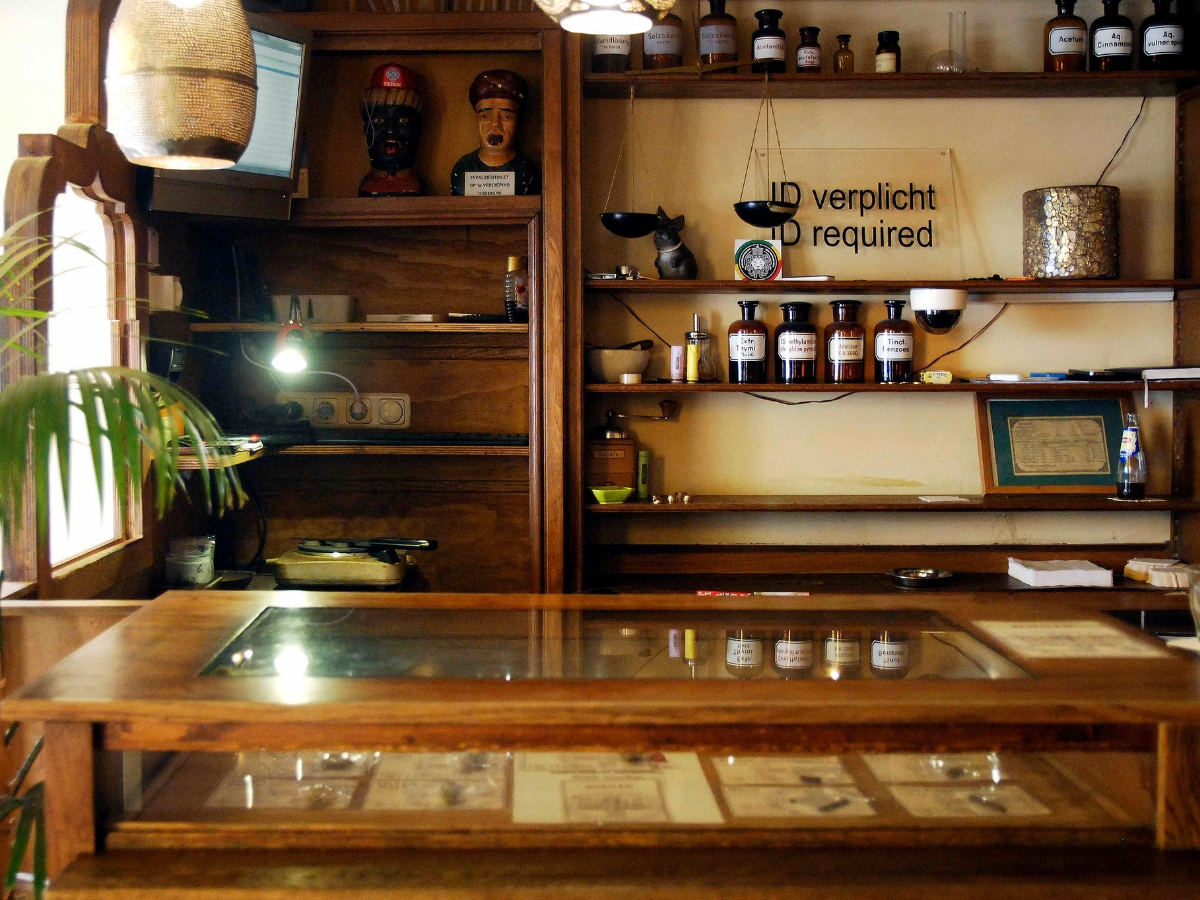 At De Bakkerij in Eindhoven, cannabis is sold in a separate section of the premises called De Apotheker, styled like an old-fashioned apothecary. (All images courtesy of Derrick Bergman)
By Derrick Bergman | Published: October 16, 2018

Local authorities in the Dutch city of Eindhoven in the south of the Netherlands closed down one of the country’s oldest and most iconic cannabis coffee shops on August 19. De Bakkerij — Dutch for “The Bakery” — has been selling hash and weed for more than 40 years. The current owners, Peer and Patricia, are now fighting for the survival of this cannabis culture monument. Their case is a textbook example of how the paradoxical Dutch cannabis policy makes it almost impossible for coffee shops to operate safely and legally.

You could go back centuries to tell the story of De Bakkerij. It’s located on a street called Stratumseind, in a town that was granted city rights in 1232. Stratumseind is one of Eindhoven’s oldest streets, having existed since those initial medieval times. The building that houses De Bakkerij was constructed in the 18th century, possibly even earlier. From around 1910 to 1973, it housed a real working bakery. By this time, one shop after another on Stratumseind was being converted into a bar, cafe or restaurant. Today, the 738-foot-long stretch of road is among the busiest nightlife streets in the Netherlands, lined with bars and restaurants.

Sources differ on when exactly the bakery selling bread and biscuits was changed into café De Bakkerij, selling hash. This most probably happened in 1974, which makes it one of the oldest Dutch coffee shops in the nation. The famous Bulldog chain of coffee shops in Amsterdam opened in December of 1975, for example, while the Dutch tolerance policy for cannabis wasn’t formally adopted until 1976.

In its first few years, De Bakkerij was a jazz café, with live concerts held every two weeks. The café’s original founder Rob Erkelens not only allowed his patrons to smoke hash on-site, he also allowed a so-called house dealer to sell the product on the premises. (Erkelens was a musician himself, playing in a beat group called The Satellites in the ’60s.)

In those early days, everything had to be done discreetly. Max Steenberghe, a veteran local journalist, recently shared his memories of De Bakkerij during this period of the late ’70s. One of the original house cannabis dealers at the time was Eddy Klokgieters, who would later open his own coffee shop, Pink Panther, in 1984. Also known as Pink, this is now Eindhoven’s biggest and best-known coffee shop.

“[Eddy] always sat in De Bakkerij,” Steenberghe wrote in the city newspaper Eindhovens Dagblad, translated from Dutch. “The dealer of service was recognizable by his permanent place at the corner of the bar. Nobody could sit on the stool next to him; the cutting pressure. Weed was not there yet, it was about hashish. Open and exposed. Exciting. Always an opening question: What do you have? Katamma, Maroc, Red Lebanon. It did not matter what it was, he had at most two [strains], so you had to smoke what was served.”

It’s important to note that the coffee shop concept was never invented or planned by politicians or lobbyists. Rather, it was developed by individuals with a lot of guts, who saw nothing wrong in what they were doing. It took until 1980 for the Dutch Ministry of Justice and Security to publish the guidelines they were using to assess and deal with coffee shops. Before that, it was all uncharted territory. After the initial guidelines came ever more rules and regulations, including the nonsensical law that no coffee shop can keep more than 500 grams of cannabis on its premises.

Most of the early coffee shops had hash on sale only, just like De Bakkerij. “Fresh from the knife,” as Steenberghe recalls in his mini memoir. “[The dealer] had two, three thick slices, a large stock, no fuss with 500 grams at that time. They were, everyone knew, on the ceiling plates above him. Always the same ritual at the sale: a slanting eye to the door, a hold up to the ceiling, knife from behind the bar and cutting, on the bar stool in front of him. Sticks with a length of one and a half matches. Wrap in a silver paper, and leave. Unpacking immediately outside again, smelling a heavenly look and quickly putting it away in a hash box.”

Around 1977, Frank Reijnaerdts took over management of De Bakkerij, staying at the helm until he passed away in 2011. A quiet man and a great pinball player, he beat me many a time, Eindhoven being my hometown and me a patron of De Bakkerij since the mid-’80s. It remains one of my all-time favorite Dutch coffee shops. And mind you, I’ve seen a few.

The incredible diversity of the customers is one of the main reasons De Bakkerij has remained so beloved. People from all corners of the world, all ages, all walks of life have visited this location. There’s a welcoming atmosphere, cosmopolitan and homely at the same time. The space itself is just right, with a large back room for live concerts and DJ nights that doubles as a consumption room. Cannabis is sold in a separate section next door called De Apotheker (The Pharmacist), styled like an old-fashioned pharmacy. The buds are weighed out in front of you and the hash is still cut, fresh off the knife.

Another draw to De Bakkerij is something that has become very rare for today’s coffee shops: The large outdoor terrace in front. Not to mention the fact that you can buy any kind of alcohol on the premises. When coffee shops had to choose between selling cannabis and booze, the management of De Bakkerij moved the dealer next door and created a second entrance that leads from the café straight to De Apotheker — a rather Dutch way of handing the regulations.

De Bakkerij has always been more than just a great place to score and get high. Current owners Peer and Patricia started an outdoor reggae festival in 1996 called Reggae Sundance and ran it for two decades. Most of the Sundance volunteers were regulars at De Bakkerij. And quite a few of them went on to volunteer at the Cannabis Liberation Day festival, the country’s biggest cannabis event, held in Amsterdam. They are all part of the extended Bakkerij family. As Steenberghe put it, “Stoners were a family. We were looking for ourselves, we found each other.” 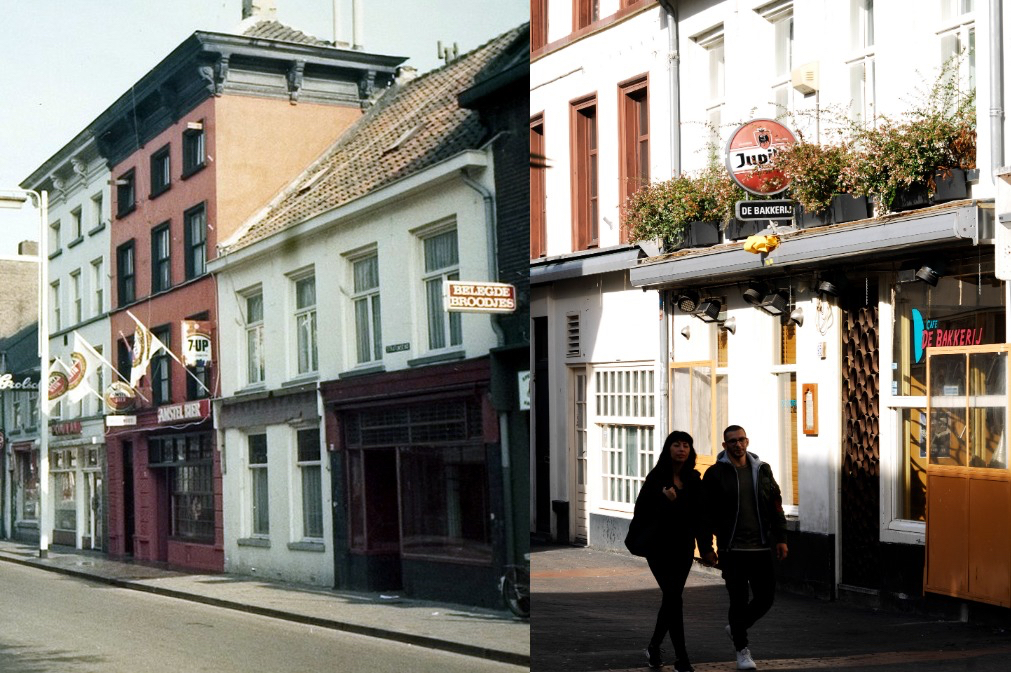 De Bakkerij circa 1974, and the coffee shop as it looks today.

So, what went wrong? Why did the mayor of Eindhoven close down De Bakkerij indefinitely?

To answer these questions, we need to revisit a fateful December night in 2016. Somewhere in Eindhoven, a police car was overtaken by an Audi whose driver “looked up skittishly,” as the police officers would later report. The officer ran the license plate through the computer system and found that the car didn’t have a valid roadworthiness test. They decided to send some colleagues over to the private residence of the car’s owner. The man driving the Audi turned out to be Peer, owner of De Bakkerij.

When Peer arrived at his home in a village close to Eindhoven, local cops were already waiting for him. They threatened to take him to the police station if he didn’t let them in. Inside his home, they found around 100 kilos of cannabis, and a small gun in Peer’s bedside table. The police wondered why an owner of a cannabis coffee shop would keep all his stock at home? And why would such a person keep a gun in his bedroom?

The answer can only be: Because of the Dutch coffee shop policy and its inherent contradictions.

The problem, in short, is that while coffee shops are allowed to sell cannabis, growing cannabis, buying it wholesale, importing it or even having it tested at a lab are all strictly prohibited. On top of this, the 500-gram limit forces coffee shop owners to work with additional secret stashes and a complicated system of runners to transport the product from the location of that stash to the coffee shop premises — without being caught by police or robbers in the process.

This so-called backdoor paradox leads to all kinds of excesses. Among the worst are badly run underground grow operations burning down and rip-offs gone wrong. When a coffee shop owner is robbed, they obviously can’t go to the police. If they did, they would themselves be arrested. In effect, the state refuses to protect the coffee shop and its staff while at the same time collecting more than €400 million in taxes from the coffee shops every year.

After police found the 100 kilos of stock and the gun, Peer was evicted from his house for three months and his license to sell cannabis was revoked for a year. These measures were taken by mayor of Eindhoven John Jorritsma before the criminal case even commenced. When it did, the prosecutor demanded that Peer be jailed for six months and fined €50,000 (US$58,000). In a sensational turn of events, the judge threw out the prosecutor’s case on August 21, 2018 due in large part to the way police had treated the suspect, having forced their entry into Peer’s house without any prior search warrant in place.

The verdict reflects a growing trend: In cases of coffee shops with more than 500 grams in stock, frequently more judges let the defendants walk without any sanction. In a groundbreaking ruling in October 2014, the former owner of SuperFly Coffeeshop in Hoofddorp, southwest of Amsterdam, was given no sanction after police found a stash of 100 kilos. According to Amsterdam’s daily newspaper Het Parool, the magistrate at the Amsterdam District Court stated that “following judgments of other courts the court considers it a matter for the legislator to regulate this back door problem.” Judges understand that to run a business, you need to have stock. 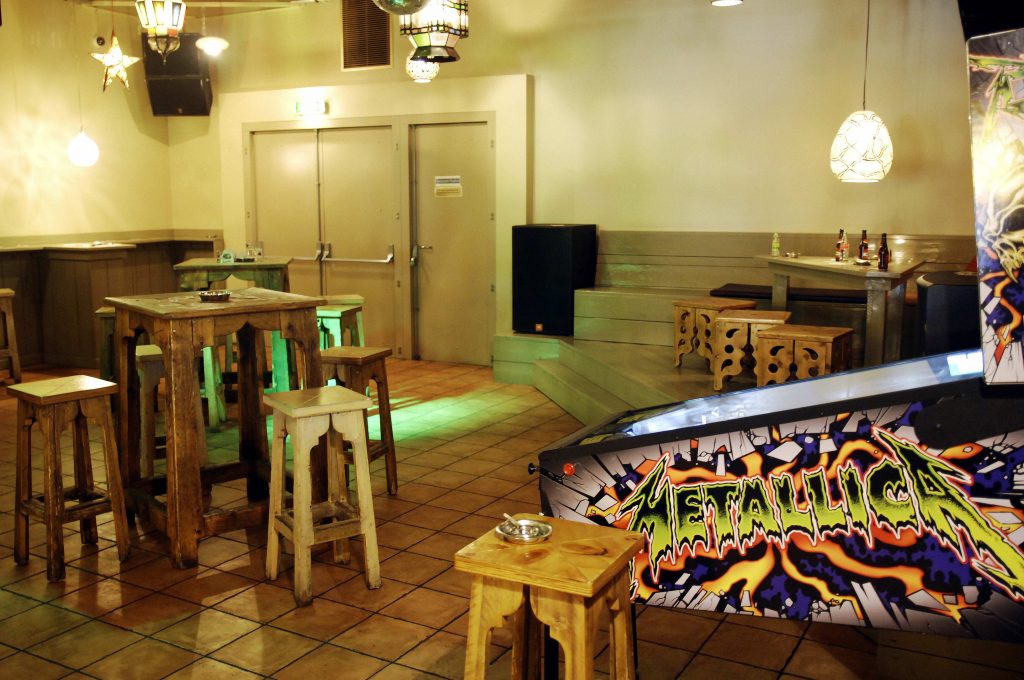 For Peer, his partner Patricia and their customers, the verdict of August 21 was something of a Pyrrhic victory. Just two days before, Mayor Jorritsma once again closed down De Bakkerij. And this time, both the café and the coffee shop were shut down indefinitely. The reason given by the mayor? Local authorities need time to run a background check on Patricia, who has applied for new cannabis operating licenses for De Bakkerij and De Apotheker. Steenberghe pulled no punches when he reported about the consequences of the mayor’s decision:

Eindhoven has lost the beloved coffeeshop — for the time being. And it’s an important one, right in the middle of the Stratumseind. The street dealers, with their unsupervised garbage and a knife or a gun in their belt, certainly won’t mind.

Of course, I went to De Bakkerij on the last day it was open, Sunday, August 19. I took my wife and two of my sons. It was a sunny day, the terrace was filled with happy people, smoking, talking, drinking, and generally enjoying life and freedom. I thought of the many encounters I’d enjoyed there over the years, the friendships that could last for a day or for decades, the joking around with the staff members, teaching my three sons how to play pinball at “De Bak,” as we call it.

It really hurt to realize that this could well be the last time ever, that after 44 years, De Bakkerij would simply cease to exist. Thanks to bickering politicians. “Politricks,” as Jamaican reggae musician Peter Tosh used to say. The decision on the new license application is expected before the end of November. Let’s hope Mayor Jorritsma will have the wisdom to save this truly extraordinary establishment.

What’s In The Box? The Best, Most Convenient Cannabis Subscription Boxes That’ll Give You More Butter For The Spread
Mixed Greens: How To Grow More Than One Cannabis Strain At The Same Time