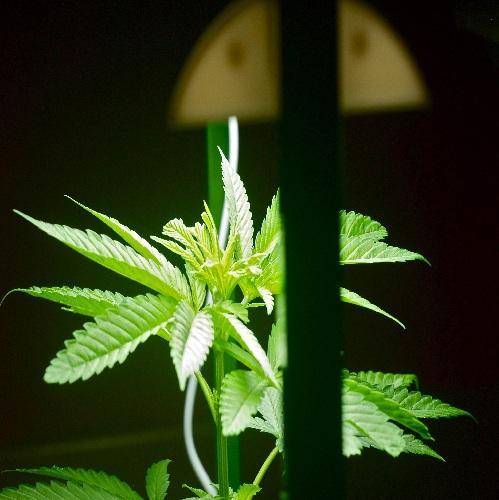 By Gary Anderson | Published: July 30, 2012
Why did you start growing marijuana? I started because I figured I could grow it more easily and cheaply than buying it.

And because it looked like fun, maybe a new business I could get into so I could work at home.

I started out by buying a clone from a friend. Or at least I thought it was a clone, more about that later.

It was a cross between Chocolope (Cannabis Cup winner) and Hawaiian Snow. At the time I had not done my homework and I had no idea what the growing characteristics of this cross are.

In fact, I had not done much marijuana growing homework at all. I did not buy any marijuana grow books or read Big Buds yet. I always heard marijuana was a “weed,” so it would be easy to grow.

I found out that Hawaiian Snow and Chocolope are Sativa dominant. This means not much body effects and a lot of mind effects.

It also means a tall marijuana plant with a long bloom time- around 7-12 weeks, depending on conditions and your personal preferences.

The longer you wait the bigger your buds and stonier your high, but of course you don’t want to wait too long, because overripe buds will lack potency and have degraded THC.

Chocolope comes from a strain called Cannalope. This means that in the Chocolope you taste hints of cantaloupe and chocolate. You have to cure the plant properly to get this good taste to happen for you.

As I say, I didn’t do my homework and I was going as cheap and low-tech as possible because I wasn’t sure of my growing abilities and I was broke.

I got a one-gallon pot and a bag of Fox Farm Ocean Forest at the hydro store, along with a plastic round tray to put under the pot to catch water.

It was May so I put the plant outside and kept moving it around in the yard so I could give it about 5-6 hours of direct sunlight per day during the spring and summer.

In the evening or rainy weather I brought it indoors and put it under a Hydrofarm T-5 grow light set-up that cost me about $60 on Amazon and consisted of a stand and a single bulb T5 high output. The bulb fixture could be raised and lowered easily.

The T5 bulb put out enough light to keep the plant growing good during veg. On most days after the roots got established and especially when there was steady sun all day, the plant had grown a quarter inch or more that day.

For fertilizer I relied on what was already in the Fox Farm soil but it quickly got depleted. When the roots started coming out of the bottom of the one gallon pot, I got a five gallon pot and repotted.

Because I was not happy with the Fox Farm soil, I added a 2-2-2 fertilizer called Insect Frass. It’s an all organic source of major nutrients, and also provides “chitin,” which helps strengthen plant immune systems and structure.

The plant was only about two feet tall when I repotted and I wanted it taller, so I decided to give it a few more weeks. I knew enough from looking on the Internet that at some point I was going to have to give the plant 12 hours of light and 12 hours of dark so I could force it into flowering, but I wanted it bigger so I would get more buds.

One thing I found out too late is that my “friend” had not sold me an actual clone, he had sold me a marijuana seedling that was the product of “sex-reversed” female seeds using the “silver ionic” method.

This New Age feminized marijuana method is too weird for me to understand or recommend, but I was pretty ticked off thinking I might be growing a male plant, when what I thought I’d been growing was a clone from a female Hawaiian X Chocolope!

In the next article in this series, we’ll talk about what I found out while growing the plant from mid-veg into bloom phase. Was it a male or female?

The main thing I’d learned so far is that marijuana is not a weed. I should have done my homework and been better prepared. You need skill and knowledge to grow marijuana properly.

Study Shows That There Is No Link Between The Rise of Teenage Marijuana Smokers and The Existence of Medical Marijuana Dispensaries
Confessions of a Beginner Marijuana Grower: So It’s a Girl, Now What?