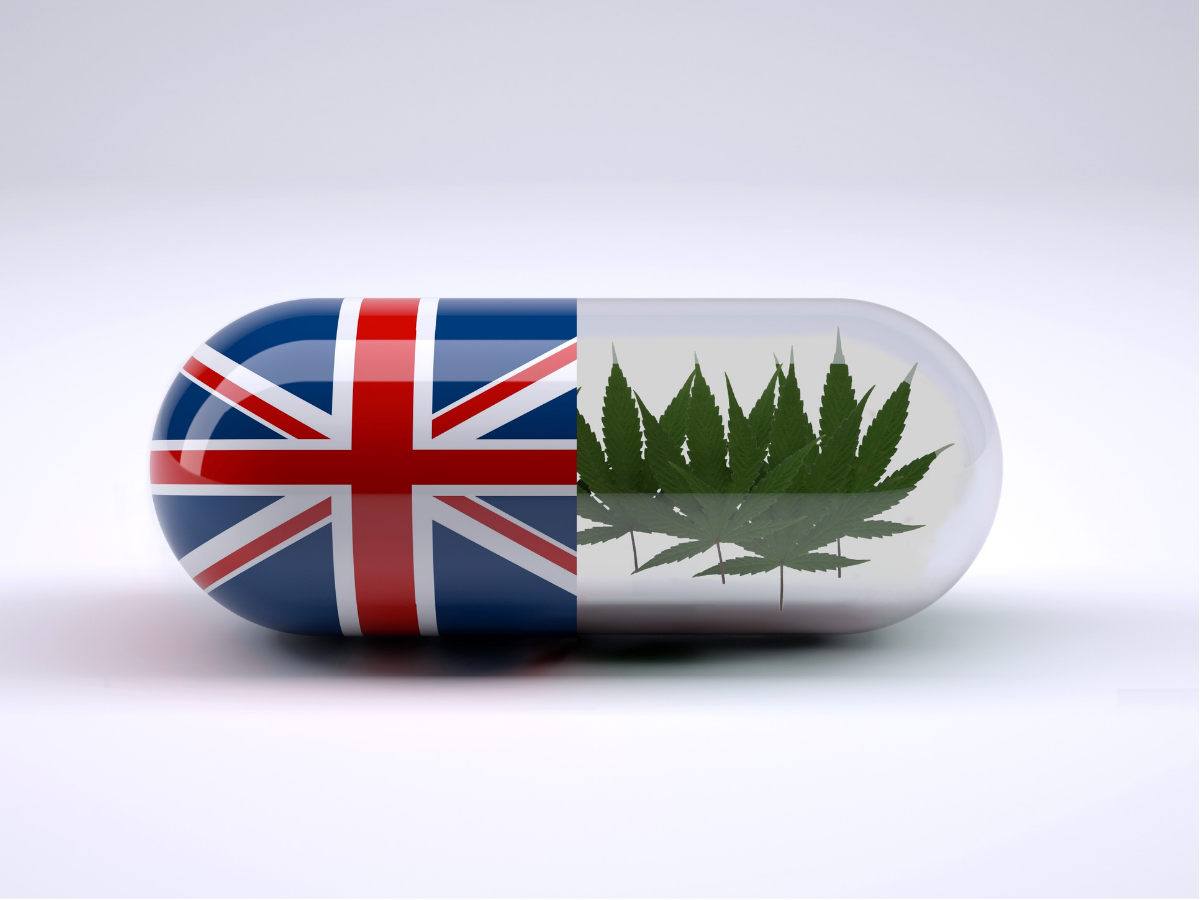 The summer of 2018 was one of significant climate change, both weather wise and politically speaking, for not only the general population of the United Kingdom, but also for the British nation’s cannabis growers and consumers.

The life of seven-year-old Alfie Dingley had been acutely impacted by cannabis prohibition. Hailing from the town of Kenilworth in Warwickshire, about 90 miles northwest of London, since he was just eight months old, Alfie has suffered with a rare form of epilepsy that results in up to 150 epileptic fits per month. After various anti-epileptic medications, including heavy doses of steroids, failed to control his condition, last year Alfie and his family briefly moved to the Netherlands so that he could legally access medical cannabis to treat his seizures. And after just a few weeks, his health dramatically improved, with a dramatic drop in the amount seizures the youngster was experiencing.

Nevertheless, upon the family’s return to Britain, the UK government refused to allow Alfie access to medical cannabis, so the boy’s mother Hannah Deacon began her battle to procure his lifesaving medicine via the UK’s National Health Service

After intense public pressure, last June the government granted a special license so that Deacon would be the first person to legally be allowed to enter the UK with THC oil to treat her son’s condition.

“[Alfie is] going to school every day, he’s riding a horse, he’s riding a bike. He has a pretty much normal life … and has not had any seizures,” Deacon says of her son’s improved health post THC oil, according to the Independent.

In a separate case that was brought to light earlier this summer, 12-year-old Billy Caldwell of Northern Ireland, who lives with autism and epilepsy, was prevented from accessing cannabis oil in Britain. His mother Charlotte was forced to fly to Canada to procure cannabis medicines, but the oil she was attempting to bring back into the UK was seized by British officials when she landed at Heathrow Airport.

Again, public outcry forced the government to issue a special license to Caldwell’s family, allowing them to bring cannabis oil into the country.

Now, British Home Secretary Sajid Javid has announced that beginning November 1, the government will reschedule cannabis-based products so they can be legally prescribed by doctors to patients with “an exceptional clinical need” in England, Wales and Scotland when medically appropriate. Northern Ireland will soon follow suit with these legislative amendments.

According to an official statement released by the UK government, only “cannabis-based products for medicinal use will be available for specialist doctors to prescribe legally” to qualifying patients. The government’s announcement also stipulates that “it has no intention of legalising the recreational use of cannabis. Due to the known harms of smoking and the potential operational impact on misuse and diversion, smoking will remain prohibited.” Further clarifying its position, the UK government’s outline states:

There are 3 broad requirements for products before they can be prescribed:

Home Secretary Javid has repeatedly asserted that the new medical cannabis policy shouldn’t be seen as a step toward UK legalization of recreational cannabis.

“This government has absolutely no plans to legalize cannabis and the penalties for unauthorized supply and possession will remain unchanged,” he said in an address to the House of Commons. “We will not set a dangerous precedent or weaken our ability to keep dangerous drugs off our streets.”

For decades, growing, processing, possessing and selling any amount of whole cannabis or cannabis concentrates has been illegal in the UK, although the Home Office has been granting licenses for the cultivation and processing of industrial-use cannabis since 1993. However, in some jurisdictions, local police are now calling for cannabis legislation, because the drug laws are no longer enforceable in relation to the plant, are a waste of police resources, endanger consumers, and empower the multimillion-dollar cannabis black market.

Speaking to The Guardian, Durham Chief Constable Mike Barton said earlier this year that “the status quo is not tenable. It’s getting worse. Drugs are getting cheaper, stronger, more readily available and more dangerous. I have come reluctantly over the years to the conclusion that we need to regulate the market. If you can regulate the market you can make sure it’s old-fashioned cannabis – not skunk or spice.” Spice refers to the synthetic cannabis made from amphetamines that has ravaged segments of the UK population.

Trevor, a long-time, UK-based cannabis cultivator who is connected to a grower network in Northern England, tells Big Buds exclusively, “Believe it or not, our police agencies are more progressive-minded than the politicians when it comes to cannabis. Several major police forces announced they have deprioritized possession offences and some have deprioritized personal grow ops, unless there’s clear evidence of dealing cannabis.”

Other growers within Trevor’s network are relieved that in some parts of the UK, where police agencies are the most lenient about cannabis cultivation, home growers caught with fewer than a dozen plants are only penalized with a minor fine and no permanent criminal record. 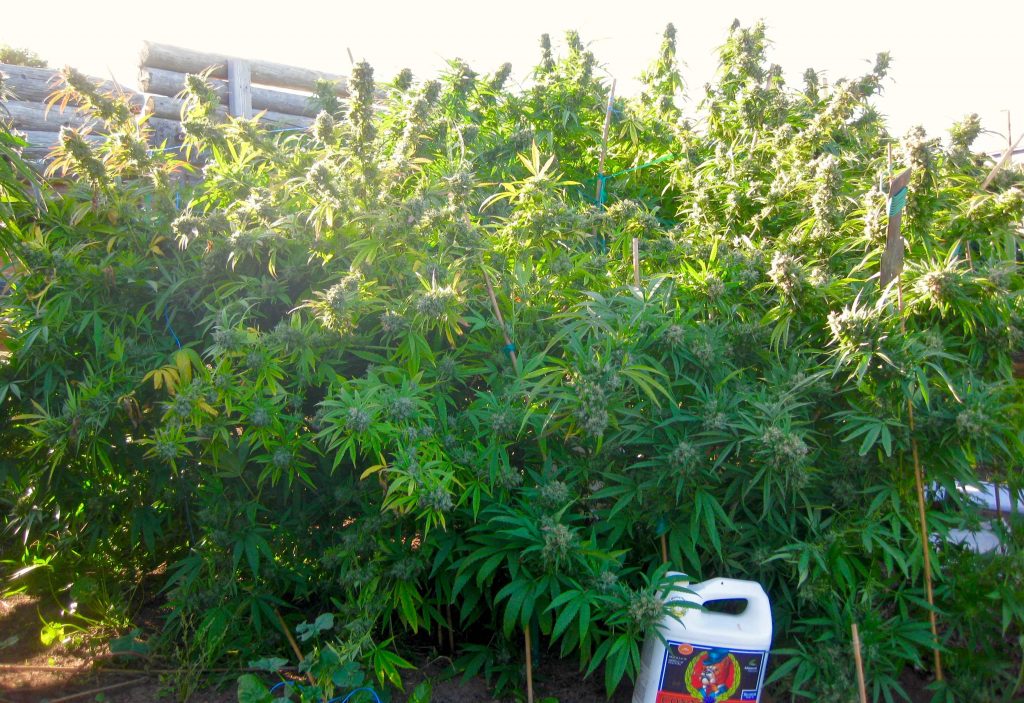 This season, UK growers harvested as much as 250 grams from one plant, including this Auto Blueberry strain. (Image courtesy of Trevor)

Climate change had a noticeable impact on the UK this summer. Record-breaking wildfires and drought affected thousands of acres of land in the north of England, Wales and Northern Ireland, drying up rivers and lakes, while soaring temperatures and weeks of uncharacteristic constant sunshine were in stark contrast to the country’s usual gray, rainy climate. These changes echo those seen in Northern California and elsewhere, which can create severe problems — or new opportunities— for cannabis growers, affecting the way they cultivate their cannabis.

“Our climate and weather this year reminds me of what you see in Spain,” Trevor says. “The warm temperatures, relatively low humidity and rainfall, and many hours of sun per day were welcomed by us cannabis growers.”

Despite it being the warmest time of the year, the UK’s typical summer climate is known for persistent summer rains, fog, dampness, humidity, and cloudy skies that make growing indoors or outdoors a difficult enterprise. The wetness provides a perfect environment for molds, mildews, snails and slugs to thrive. The ground can be so soggy that the roots of outdoor cannabis plants may drown. Lack of sunshine robs plants of sufficient photosynthesis, so crucial early growth is stunted and in most cases plants never recover. Buds rot before they fully ripen.

While indoor growers are spared the slugs and mold and can provide electronic sunshine to their crop, the general high humidity has meant that indoor grow ops suck down a lot of dehumidifier electricity.

Traditionally, the UK outdoor grow season is relatively short, Trevor explains, as cold, rainy, stormy weather can be expected from October through April, leaving only May, June, July and August as prime cultivation months.

Experienced growers start their plants indoors under 24 hours of fluorescent or LED grow lights in mid-April and give plants two to three weeks of growth before placing them outdoors in May after the dangers of frost have passed.

“More and more growers are turning to autoflowering cannabis for indoor and outdoor growing,” Trevor says. “At our latitude, summer days can be as long as 15 to 16 hours. The constant sunshine during those long days is wonderful for autoflowering marijuana plants that thrive on 18 to 20 hours of light per day from start to finish of their life cycle. The benefits of autoflowering’s short season are the plants are ready for harvest before the end of August, before the colder, rainier weather arrives. Photoperiod plants aren’t ready until late September or October, and by that time, temperatures and sun hours have dropped, and rains and cloudiness have increased.”

Harvesting ripe autoflowering plants ahead of autumn gives growers an easy way of beating the molds and mildews that often come with wet, autumnal weather to plague photoperiod plants that have longer life cycles, Trevor claims.

“The biggest problem for growing photoperiod outdoor varieties in the UK is the climate in early October. If you’re lucky, October has several weeks of sun and warmth,” Trevor continues. “But usually, you can expect misty and damp conditions, ideal for bud rot. Driving rain from Atlantic and North Sea storms are common. Gale-force winds and flooding can occur in the autumn, and frosts are not unheard of. Some past years we’ve had warmer and drier autumns, allowing photoperiod plants to not be impacted by mold and bud rot. This summer and autumn have been spectacularly favorable for cannabis growers, with warm and dry conditions from start to finish.”

Outdoor growers in rural parts of the UK have an easier time of grow-site selection than people in more urbanized areas. Outside of the large cities, much of the UK is comprised of farmland, parks, moors, forests, and protected open spaces with meadows, riversides, fallow agricultural land and heathland where intruders are unlikely to discover a guerrilla-style cannabis grow op. Growers use camera-equipped drones and Google Earth to locate isolated, sunny spots along river banks, remote field corners, woods and unused urban land.

Some growers who believe they have sufficient security grow outdoors in their fenced gardens or on open land that’s under their control. In some cases, they use greenhouses or polytunnels to protect plants from pests, rain and disease. If plants are grown in the open rather than in appropriate shelters, growers use slug and snail pellets. They also utilize fencing to keep wild animals from eating their crops.

The growers in Trevor’s network are converting from photoperiod cannabis to autoflowering strains sourced from the likes of Dutch Passion Seed Company. The strains they favor include Auto Durban Poison, Auto Blueberry, Auto Blackberry Kush, Auto Cinderella Jack, Auto Mazar and Auto Euforia. And this year, according to Trevor, they were blown away by the huge yields and copious resin glands produced by these autoflowering strains blooming in the intense heat and sunshine of an unseasonable summer.

“Growers using those strains harvested as much as 250 grams from one plant, and were able to harvest long before any outdoor photoperiod crop would be ready,” he says. “These strains rarely grow taller than three and a half feet, which makes them much harder to detect. The autoflowering versions outperform the photoperiod version of the same strain in both yield and potency.”

According to the UK government’s Forestry Commission, climate change will continue to impact not just Great Britain and Northern Ireland, but much of the world, resulting in warmer, drier summers, warmer and wetter winters, and an increase in extreme weather events.

The 2018 summer is a harbinger of what’s to come for British cannabis growers — and the cannabis cultivation benefits of warmer, drier weather might be the one good thing about climate change that is the direct result of human influence.

Proxy For Poison: Substitute Products To Use Instead Of Monsanto, Bayer And Scotts Miracle-Gro
Vapor Capers: Here’s What’ll Be Big In Vape Technology For 2019