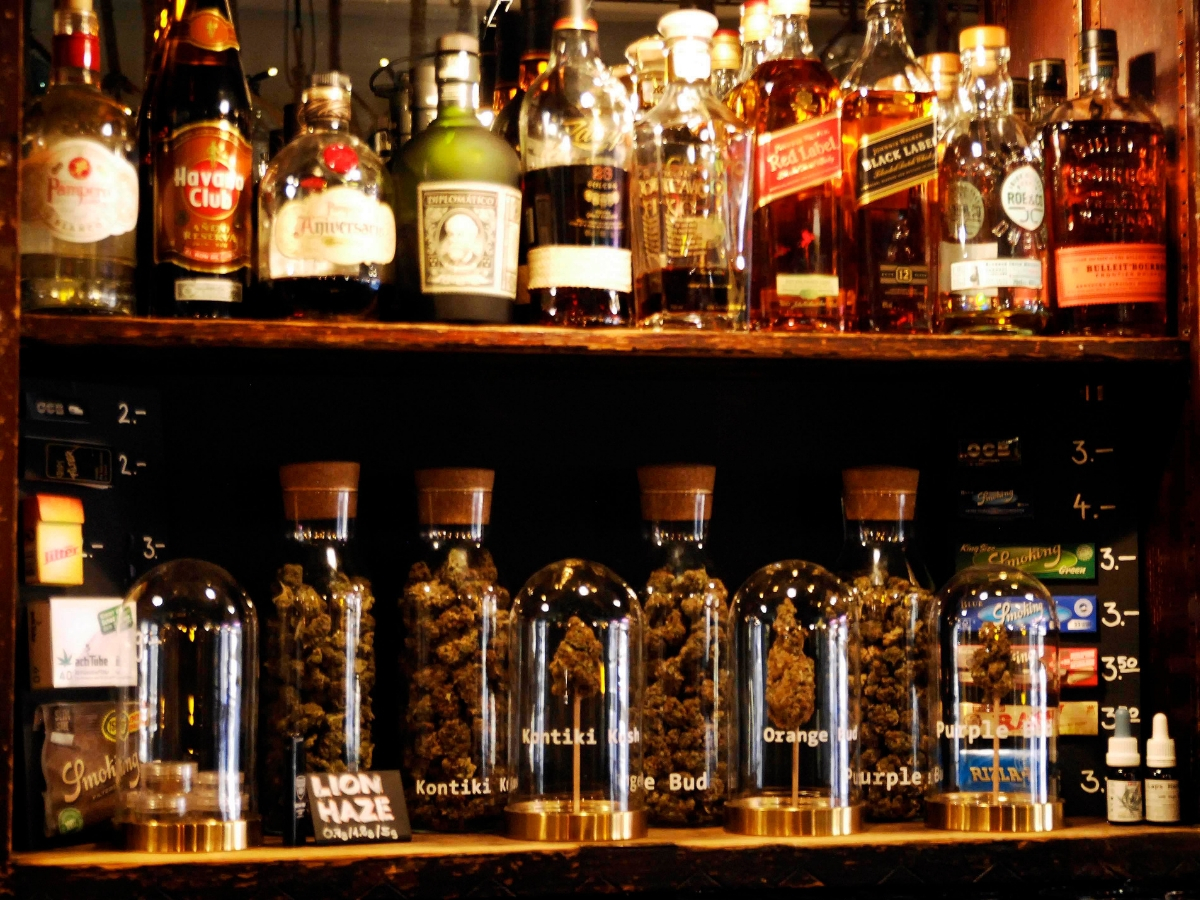 The shelves at Zurich’s Kon-Tiki are lined with hard liquor and bud. (Image courtesy of Derrick Bergman)
By Derrick Bergman | Published: September 13, 2018

Forget chocolate, cheese and Rolexes — there’s a new industry on the rise in the Alps.

Switzerland is home to one of Europe’s oldest cannabis fairs. CannaTrade launched in 2001 and this year’s event, held last April, was a memorable one. The three-day festivities took place in Zurich, the nation’s biggest city that’s not only known for its fine foods and fancy timepieces, but also for its independence and neutral position when it comes to international politics. Switzerland is not a member of the European Union and managed to stay neutral in both world wars of the last century. Indeed, the last time the Swiss experienced war in their country was the Sonderbund War of 1847.

The Swiss also tend to take an independent position when it comes to the war on drugs. It introduced a new drug policy in the early ’90s, enabling Zurich to become among the first cities in the world (the first facility was established in the Swiss city Bern in 1986) where hard drug users could take their drugs in a safe consumption room, with clean facilities and medical staff on hand. This pragmatic harm reduction measure was unheard of at the time.

So, how do the Swiss handle cannabis? 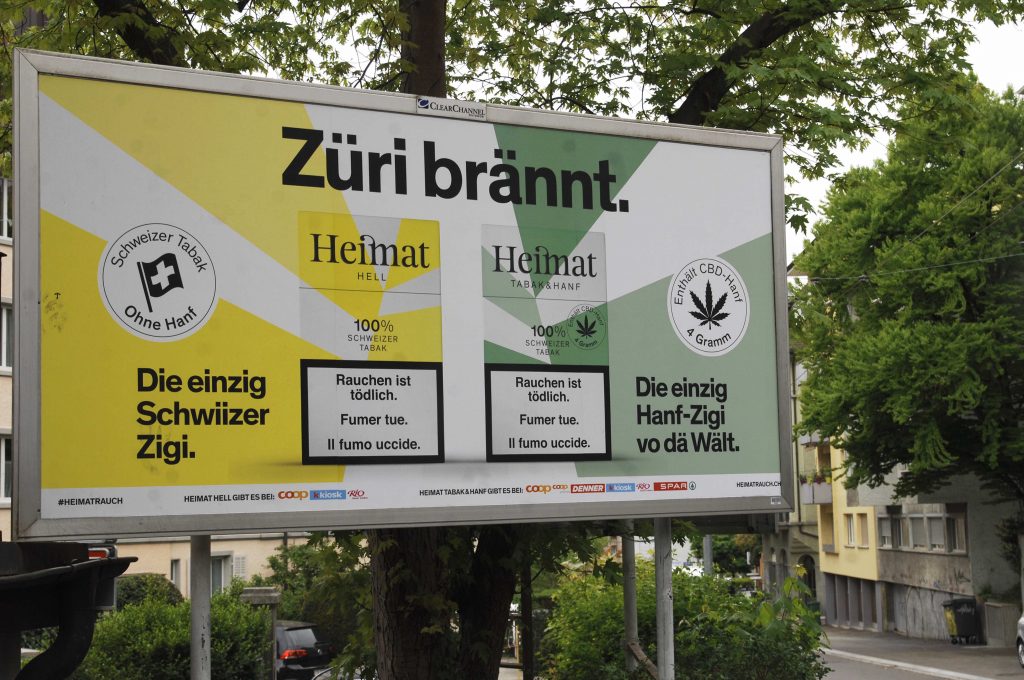 Koch & Gsell, founded in 2015, made global headlines when it introduced “the first tobacco hemp cigarette in the world” under the brand name Heimat (homeland) in 2017. The cigarettes, packaged per 20, contain tobacco grown in Switzerland and a total of four grams of CBD hemp, with less than one percent THC. They are sold for 19,90 Swiss Francs (USD$20.50) per package at tobacco shops and two major supermarket chains, Lidl and Coop.

Legal so-called CBD weed is also on sale in the form of dried buds at most tobacco shops in Switzerland. Some big-name cannabis brands in the Swiss market include Double Green, BioCan, Swiss Flavor, Weedz AG, KannaSwiss and Kahna Queen. Each of these companies grow their own strains, such as Fedora by BioCan, or produce CBD varieties from major seed companies like Dinafem Seeds.

According to Swiss newspaper Tages-Anzeiger, there were 410 registered companies manufacturing or trading CBD in Switzerland as of December 2017. A lot of these were present at the CannaTrade fair in April. Perhaps the most striking feature of the fair? The vast number of live cannabis plants on display, in all shapes and sizes.

Clones were also being openly sold at the fair, and in a number of booths, huge jars full of beautiful buds were on display. The buds looked like weed, smelled like weed and even tasted like weed — but they didn’t get you high. It made the whole experience quite surreal. Or rather, quite Dadaist. Zurich is the city where the Dada art movement was born around a century ago. You can still visit the Cabaret Voltaire on Spiegelgasse. Seeing so many CannaTrade visitors puff on big joints, without knowing if they were just smoking the legal CBD weed or maybe something else, felt like a Dada performance piece.

Visiting one of the first legal weed coffee shops in Zurich, Kon-Tiki on Niederdorfstrasse, gives a similarly absurd feeling. Located in the heart of the beautiful Old Town, it has been a bar for more than 60 years. But now, you can buy four different strains of cannabis at the counter — Lion Haze, Orange Bud, Purple Bud and Kon-Tiki Kush — and smoke your purchase in the large upstairs lounge. In almost every respect, this room at Kon-Tiki was like a Dutch cannabis coffee shop, with people talking, smoking and drinking together. However, the one thing you wouldn’t find in a Dutch coffee shop was the sign on the wall proclaiming, “Consume only laps CBD products here. No high THC products.”

On the last day of the CannaTrade fair, the winners of the Canna Swiss Cup were announced and awarded beautiful trophies. In the preceding months, jury boxes with 35 samples of Swiss CBD strains had been on sale at tobacco shops and Coop supermarkets all over the country — another first in the modern cannabis era, as far as I know. The boxes looked sophisticated and retailed for 215 Swiss francs, or about USD$220. BioCan won first place in the Outdoor and Greenhouse categories with its Fedtonic strain, plus second prize in the Indoor category. The Indoor winner, PiHaze from Weedz AG, contains 22.4 percent CBD and 0.9 percent THC.

So, Switzerland has plenty of legal producers of cannabis, distribution through tobacco shops and supermarkets, a fully legal cannabis cup, and a handful of coffee shops. Police don’t seem to be too concerned about cannabis. If they suspect someone is smoking weed that contains more than one percent THC, they can demand a lab test to determine the THC level. If it’s over the limit, the unlucky toker has to pay the lab test and a fine for illegal possession.

Meanwhile, a growing number of Swiss politicians realize that the country could make millions if they export locally produced medicinal cannabis. Up until now, the federal health authorities have refused to allow such a practice. However, in March, a group of 50 politicians led by Christa Markwalder of the centrist Free Democratic Party called upon the government to either allow export or change the law, so that Swiss farmers can profit from the fast-growing global market for legal medical marijuana products.

One question, however, remains: Will Switzerland be the first country in Europe to completely legalize?
Since the summer of 2016, when legal cannabis first began appearing in Swiss stores, a wealth of experience has been accumulated — not just when it comes to growing cannabis, but also when it comes to testing, packaging, retailing and marketing the plant. Switching to normal cannabis without a maximum THC percentage would be a piece of cake for the companies involved. Add to this Switzerland’s traditional independent position, pioneering harm reduction policies, and the fact that the country is a champion of binding referendums — more than 400 in 50 years — and you can see why some people have high hopes for the future of legal weed in the picturesque nation.

On the other hand, if the Swiss stick to the one-percent THC limit, then the whole CBD weed business will likely turn out to be nothing more than a flash in the pan. Most of the estimated 200,000 to 500,000 cannabis consumers in Switzerland want to get high. It’s great to have legal CBD cannabis, but it’s nonsense to perpetuate the ban on other forms of psychoactive cannabis. 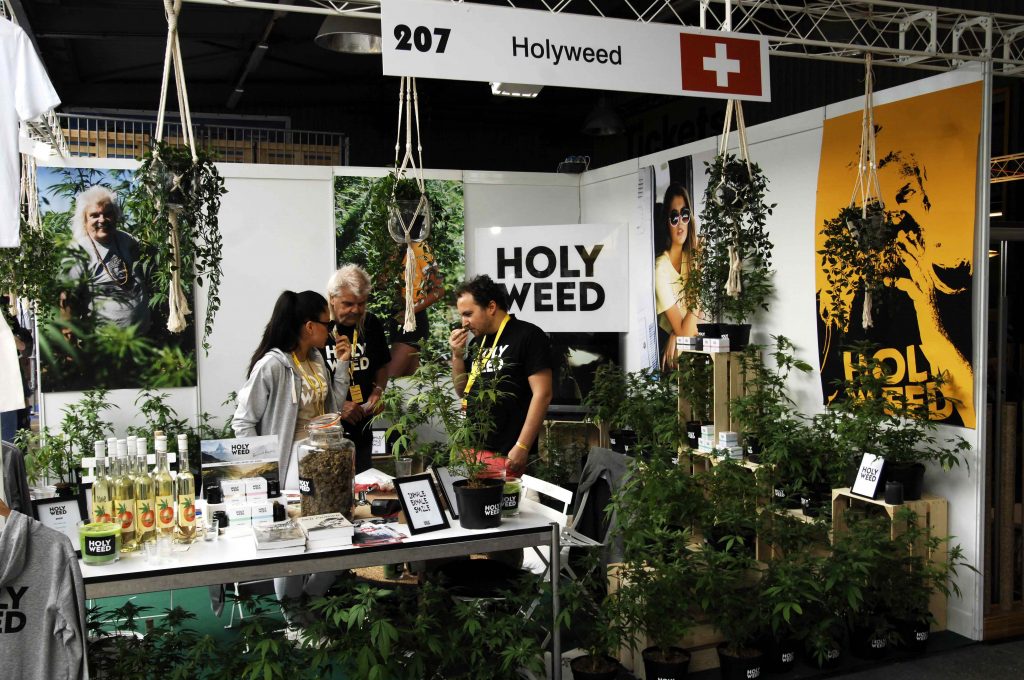 CannaTrade is one of Europe’s oldest cannabis fairs and is host to the winners of the Canna Swiss Cup. (Image courtesy of Derrick Bergman)

Perhaps a recent sign that things are moving in the right direction is a press release issued by the Federal Office of Public Health on July 4. The office announced it wants to make it easier for Swiss citizens to access medical cannabis. In 2017, some 3,000 patients were treated with medicinal marijuana in Switzerland (such qualifying conditions include epilepsy, cancer, chronic pain, spasticity and nausea), but permission is granted on a case-by-case basis.

The Federal Office of Public Health has requested the Federal Department of Home Affairs work out a new law to legalize medical marijuana by the summer of 2019. And the press release contains more good news: The government will allow scientific pilot studies on alternative regulatory models for recreational use of cannabis. For decades, local authorities have been asking the federal government for permission to start these kinds of experiments, but were always turned down. The government’s cannabis plans are up for consultation from interested parties until October 25.

Despite the slow-moving pace, one thing is certain: Cannabis has entered the mainstream in Switzerland — and the debate about legalization and medical use isn’t going away anytime soon.