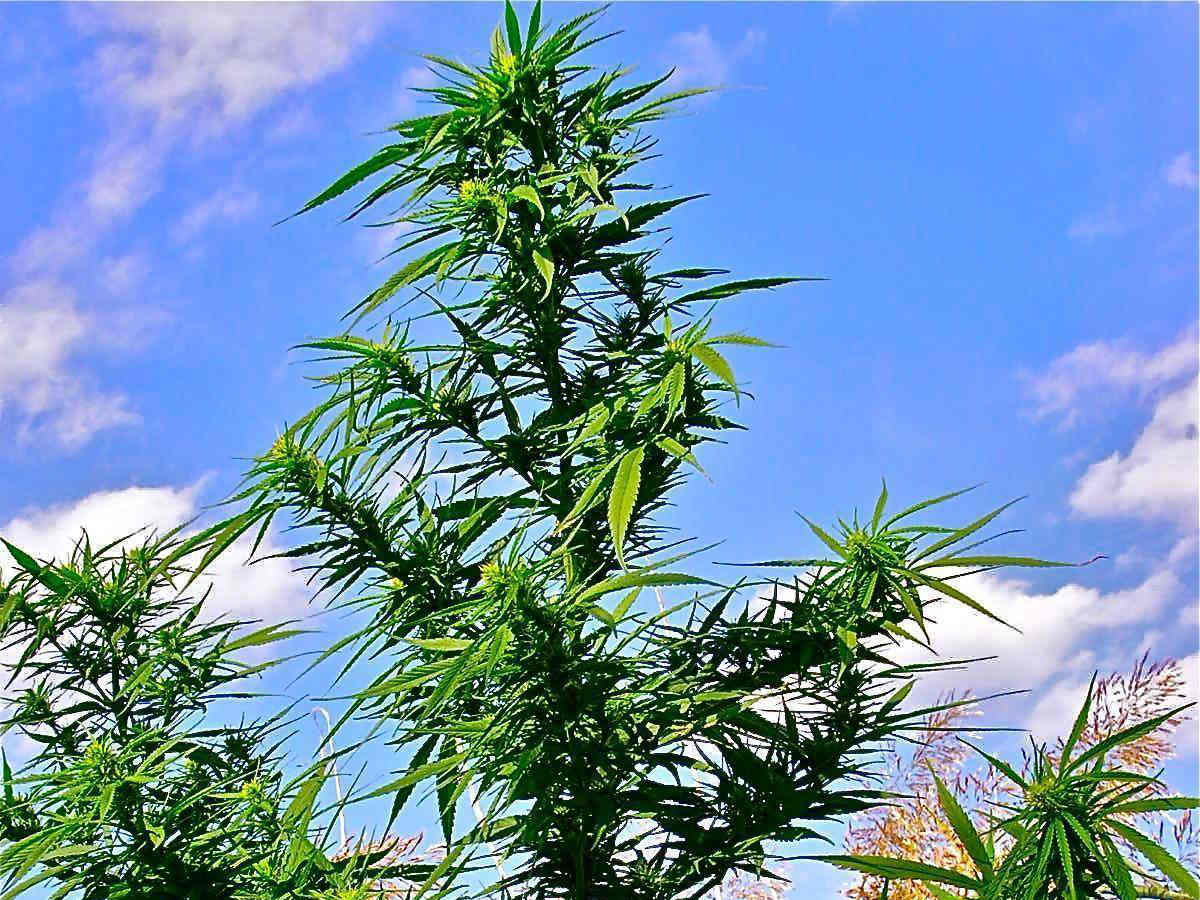 There was a point in the long drive upwards when I saw the Sacramento Valley below, shrouded in smog.

Then Jake the big money outdoor marijuana grower turned onto a dirt track barely wide enough for his vintage International Scout jeep, and we plunged into a tunnel of trees.

Using his knees and elbows to expertly swing the steering wheel back and forth, he turned us onto side roads off of side roads, with containers of peat moss, hydroponics bloom boosters, and supersoil acting as braces for potted five-week-old Yumboldt crossed with Jack Herer marijuana plants.

“Sometimes I call it YumJack. It’s great, but my favorite outdoor strain was a mix of California Orange, Oaxacan and pre-80’s Colombian Gold,” he explains. “Couldn’t be wrecked by mold, mildew, drought or wind. Heavy and early yielder. I lost the mothers, and didn’t have seeds, so I made a new strain called YumJack.”

When finally the Scout stops and the dust settles, we stash the plants and grow gear out of view and cover the vehicle with camouflage cloth.

Then we sweep the dusty road back to the last turn-off, using evergreen branches to cover tire tracks and our footprints.

From there, we ferry the stuff on foot to his grow site.

It takes several grueling back and forth hikes to get everything to the site.

My back is killing me. My legs are shaky. But Jake is still rarin’ to go. For him, this is “as good as it gets.”

And for real his grow site is about as perfect as you get when you’re a guerilla outdoor marijuana grower… a wide, reliable stream near a flat plain isolated from flooding.

We leap into a swimming hole. The icy clear waters wake me up and shock the fatigue out of me.

Jake’s grown here for eleven years, taking a two-year break after a near shoot-out spooked him away.

As we’ve been hauling in plants and supplies, he points to signs of others who’ve hiked here too.

Seems a lot of people are doing something illegal and harmful out here. Not Jake’s medical marijuana growing– he’s ultra-careful not to damage the environment in any way.

Another culprit: “Industrial growers from south of the border.”

You can immediately recognize when it’s those guys, Jake says, because they bring chainsaws, rototillers, pesticides, herbicides, pumps, generators, and grow supplies bought from Home Depot.

They have the same mentality as the timber companies that clear-cut huge gouges into forests, their ugly brown scars visible from outer space, scars that never heal, “renewable resource harvesting” that sends tons of eroded topsoil into the creeks, robbing the land of its cover and green, suffocating the fish.

Whether it’s because of miners, loggers, or careless marijuana growers, the land is left destroyed, like a war zone.

The Glock Came in Handy

As we mix and layer soil, Heavy Harvest, water-holding crystals, compost, and sand into holes three feet in depth and diameter, he tells me why he stopped growing at this site for two years.

A self-described “tree-hugger” and pacifist, Jake relized after a couple of seasons growing outdoors that growing thousands of dollars worth of marijuana in the middle of nowhere was endangering him.

Jake got weapons training and started carrying a Glock handgun and extra Glock magazines after scary run-ins with loggers, hunters and meth-heads.

“These people had different biographies and fingerprints,” he explained, “but what they had in common was no respect for Mother Earth. They like to kill things just for the pure f**k of it, and they’d steal your plants, and off you, in a heartbeat. I realized my hippie ideals would not protect me here. So I got the Glock.”

And a good thing he did. When Jake had been climbing to his grow site one September carrying Overdrive, Bud Candy and SensiZym in an army backpack, he encountered two rifle-toting men.

This was only half a mile from his 93 plants that were nearing harvest.

Jake sniffed the air and looked closely at the men’s clothing and gear to see if they’d been in his patch.

The men said they were “out shooting.”

Not even hunting, Jake pointed out, they were “shooting whatever moved.”

“You almost got shot yourself,” one of them joked, showing Jake a bleary, boozed-up smile, and missing teeth.

The men stood leering at Jake; he didn’t like it that they were asking him questions about what was in his backpack, spitting tobacco juice on the ground hear his hiking boots.

“You wouldn’t happen to have you a mary-wanna plantation, would you?” one of the men queried. “Because if you do, we’ll be helping you cut it down.”

“Well where the hell you going then?” the man asked. “You ain’t hunting or fishing, so what you doin’ out here.”

Jake could see the situation was deteriorating. He made his decision…

Making sure neither of the men had easy access to the hunting rifles slung on their shoulders, Jake replied, “I’m hunting hunters,” and faster than lighting he pulled his Glock, aimed it steadily at the men, and stepped back a few paces.

‘You ever heard of Earth First!?” he asked the men. “The motto is, ‘No compromise in defense of Mother Earth.’ I don’t feel like compromising with you bloodthirsty pieces of shit. How many animals you killed for fun today? Would you like to know what it feels like to be hunted?”

Jake said the men looked at him like he was crazy, and he was glad…he wanted them to think he was more than crazy enough to shoot them dead right then and there.

He ordered them to hand over the rifles. They complied.

A stain of wetness spread from the crotch of the smaller of the two, but the men’s eyes were narrowed slits and Jake knew he’d have to control these guys, or else a very ugly situation could turn fatal.

Putting on his best Dirty Harry imitation, he used intimidation tactics and their fear to march them, holding the gun on them from behind and smacking them with hard words the whole way, in a tense march away from his crops…back to where they’d parked their beat-up 4WD truck.

It had no license plate, but it did have a cracked windshield.

The poor dudes knew better than to ask for their rifles back.

“Get in your junk heap and drive as fast as you can as far away as you can,” Jake shouted. “Don’t even think about coming back. If I ever catch you here again, I’ll drop your sorry asses just like you’ve dropped deer, and you’ll never know what hit you. Your bones’ll join the carcasses of all the defenseless animals you’ve killed.”

Camping to Guard the Cannabis

Fearful that the men would come back and try to find him or his plants, Jake camped out that night near his crops, alert and awake.

He spent most of the day under cover, waiting until late afternoon to hike to his crops. He hiked slowly, studying the ground and foliage for signs of intruders.

The first thing he did when he got to the plants was check his remote control automatic camera to see if the men had been in his patch. He was relieved to find that no humans had set foot there, other than him.

He applied the Bud Candy and Overdrive, cached the SensiZym (he uses it to break down organic matter in the soil, which feeds crops and also preps the soil for the next season), and camped four more nights.

“My stomach was tied up in knots the whole time,” he said.

To go totally mature, his plants needed two to four more weeks, but the Glock incident weighed on his mind.

He knew there was a chance the men would come back, maybe stalk him with a posse, or call the law.

So Jake did a selective harvest of his ripest buds, enough to ensure that if he lost the rest of his crop he’d at least break even for the season.

Then he hiked back to his vehicle, worried sick that he’d be ambushed or busted.

Four weeks later, when he completed his full harvest and was ready for curing and drying, he carried out grow supplies he’d normally have left for next year.

He knew he wouldn’t be back for a while.

He gave that site two years to cool off, praying the guys he’d scared off with the Glock would no longer be tromping around in the same woods.

Some people look down at Jake, for carrying a gun, for being a medical marijuana “cash cropper.”

But in my book, he’s a noble warrior.

For one thing, his Yumboldt X Jack Herer has a taste and potency that proves he successfully combines outdoor technique with hydroponics fertilizers and supplements.

His buds kick like a mule and it didn’t cost him much money to grow them.

Jake has a medical marijuana card, for PTSD.

Pro bono, he supplies several pounds of bud to elderly people, including a lady with multiple sclerosis and a retired auto worker who has rheumatoid arthritis.

Last year he made $51,000 in profits, and used some of it to put a roof and solar panels on his mom’s house.

Jake and other cash croppers like him are an integral part of the marijuana community, just as much a part as someone growing indoors using electricity generated by coal-fired utilities spewing mercury that eventually poisons fetuses, lakes and wildlife.

“It’s all ‘medical’ marijuana,” Jake says, as we eat trail mix next to the stream. “Medicine is what makes you feel good, right? Well this,” he says, gesturing at his marijuana plants greenly glistening in the sun, “makes me and a lot of other people feel really really good.”