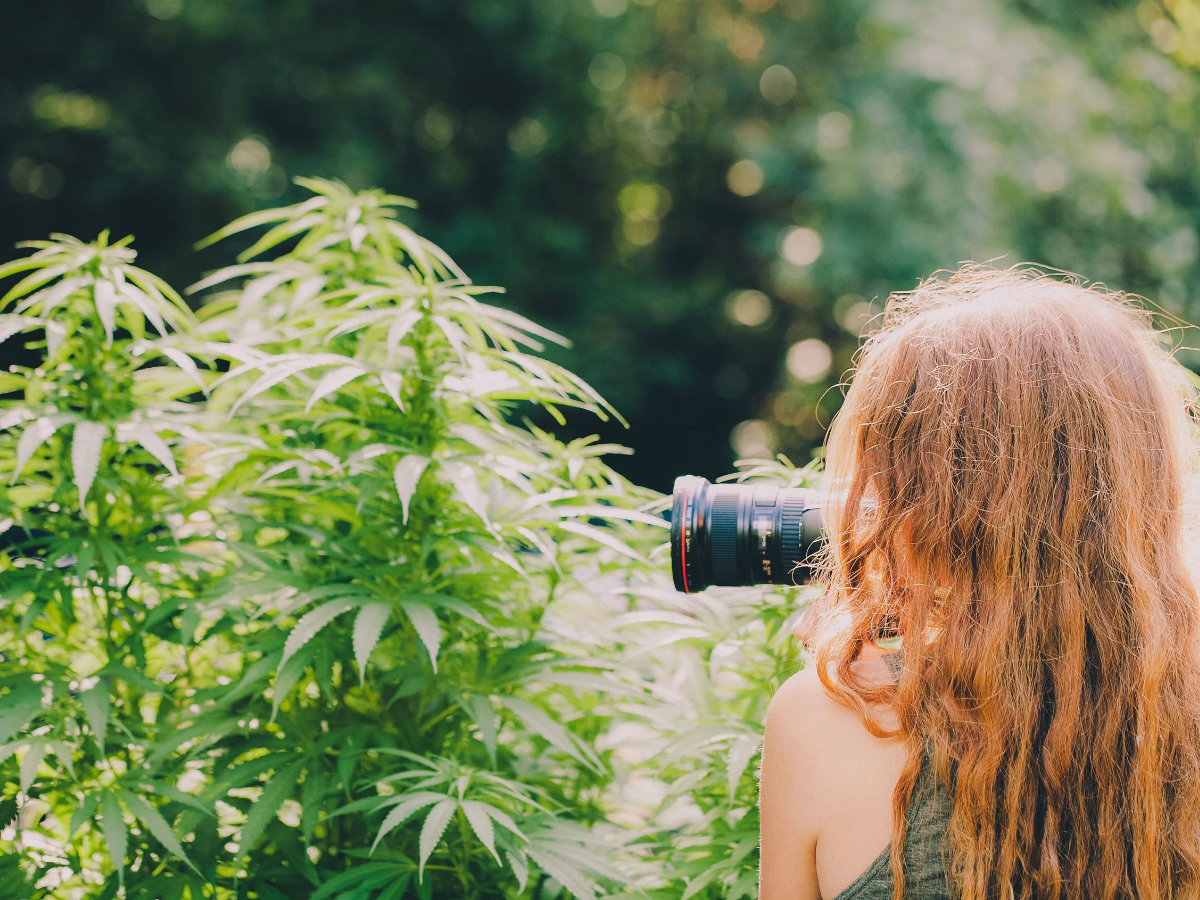 “I just really love taking photos of marijuana,” says photographer Jenny Molloy. “It’s the perfect subject that’s forever changing and developing, particularly right now with marijuana legalization and acceptance of it in so much of America. Cannabis photography is becoming more stylish.”

In the past, capturing images of cannabis often meant complicated arrangements with reticent growers and clandestine trips to grow ops where people were frequently on edge, naturally suspicious of anyone shoving a camera lens in their face. You had to know someone and be properly vetted before being allowed to visit the site. Growers had good reason to be apprehensive — just one misplaced photo could mean future robbery of a garden space, or worse: A few years in prison in some states for illegal cultivation.

Now, since cannabis legalization has gained a firm foothold across much of North America — with all of Canada recreationally legal and 32 American states plus the District of Columbia enjoying some level of legalization — a laxer attitude toward cannabis photography has evolved in the once-underground scene. Growers are generally happy to show off their hard work, and cannabis-centric magazines like High Times, Cannabis Now and Skunk are happy to oblige with photo shoots, while also offering a little PR for a grower’s botanical labors.

Today, cannabis photography has reached a new pinnacle of acceptance. High Times magazine — the undisputed leader in pot photography — is about to go public, and on social media platforms like Instagram there’s a never-ending cascade of beautiful, flowering plant images posted by an array of talented people. In the broader media, from The New York Times to Elle magazine, cannabis is at last getting a real makeover. That popularity has led to a few smart photographers like Molloy capitalizing on that momentum and turning their energies toward capturing cannabis images for the mass market.

“There’s so much room as a photographer to expand in this industry right now,” she says. “So many marijuana products are coming online all the time. Beauty products, drinks, spas, upscale restaurants — they’re all subjects that companies are looking to combine with cannabis. Many of them need interesting images and different styles of marketing materials.”

Her point is well illustrated by a contract job listing from last month in British Columbia, Canada. The government job posting appeared online and promoted business opportunities for applicants who could proficiently photograph weed products. The call was put out to anyone interested in producing original marketing images of cannabis goods for government-run BC Cannabis Stores retail sales.

The Growth Op reported that the BC Liquor Distribution Branch (BCLDB) — the body responsible for distributing alcohol and cannabis products in the province — is looking for contractors to produce images in accordance with applicable law. Rules mandate that marketing photos can’t glamorize or promote cannabis to youth or promote general consumption of marijuana in an irresponsible way. The document for the openings stated that its marketing division was looking to “make extensive use of original photography” for use online, inside physical stores, in signage and brochures, for social media and other “marketing collateral.” 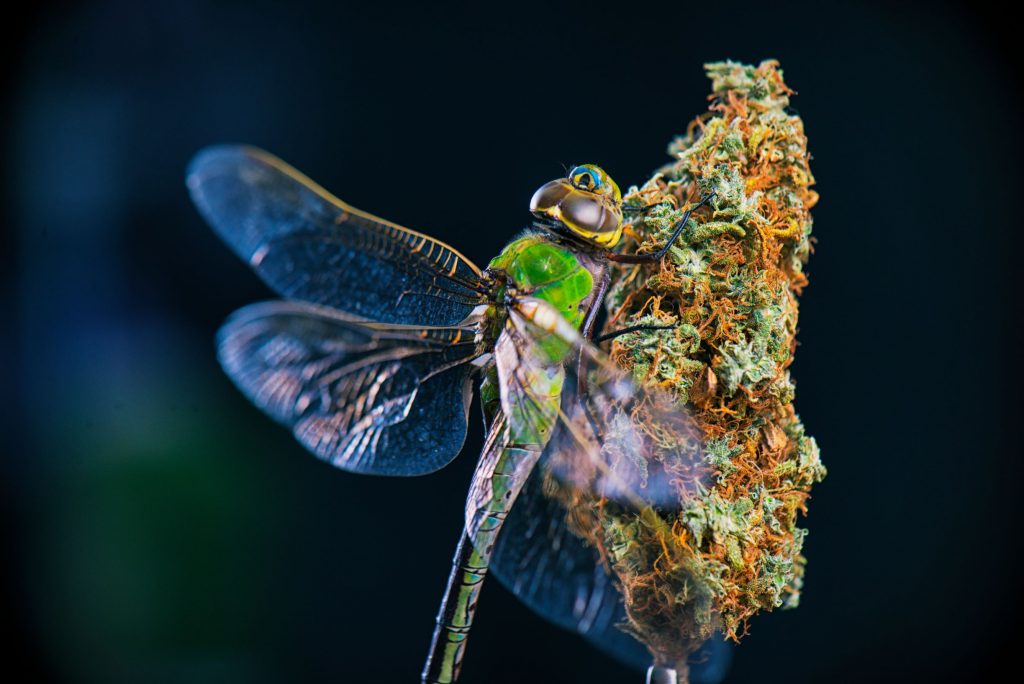 Photos like this, capturing cannabis with a dragonfly, are part of the growing, mainstream industry of cannabis photography.

While there are countless photographers who produce artful images of marijuana plants and flowers — including one masterful artist named Doobie Duck, who photographs cannabis next to hummingbirds in midflight — Molloy says there aren’t many who produce straight stock images of bud with accompanying products. But if you want scantily clad girls and weed, well, there’s definitely no shortage of that.

“I think it’s just not very sexy to shoot a little bud next to beauty supplies or wine glasses,” she says. “I’m not after sexy, though. So much of the cannabis industry is still really sexed up — like, lots of Instagram photos that show girls half naked covered in weed. I know there’s a market for that, but it’s not my market. I just want to please my clients, who are often after a more clean, elegant look.”

The idea to photograph weed and provide them as stock images was solidified for Molloy after a friend asked if she knew where to find images of cannabis paired with wine. It’s a pretty basic combination, and an activity that’s growing more popular all the time, but it’s one that was nearly absent on most stock photo websites. Even Getty Images — a visual media company that specializes in capturing every kind of stock photo under the sun — turned up lackluster photos of the pairing.

But Molloy had a lightbulb moment.

“Getty Images is one of the bigger stock picture businesses out there. They almost always have what you’re looking for in the way of stock photos,” she says. “But for some reason, their images — the ones that include cannabis, anyway — are just really limited. And the photos that they do have are not all that great.”

After searching online, Molloy found a website called Cannabis Snapshots, which features the kind of stock images her friend was looking for. “Because marijuana is an indulgent product,” she explains, “it makes sense to have it beside other luxury items or in scenes that make you feel like you’re treating yourself. It elevates the experience.”

The images on Cannabis Snapshots feature weed alongside products and activities like wine, specialty rolling papers, beauty and wellness items, and games. Looking to appeal to a higher-end market, she says the stock image provider is a good fit for her cannabis work. They make it easy for her by connecting her with clients who need images of their products, and they pay a fair market rate for her art.

“It’s a great place for me to show my photos,” she says. “I like that it’s run by photographers, too. It really helps that they speak a similar visual language to me.”

Molloy says now and again, assignments can get a little challenging, when clients assume you just add a little green bud next to an object and the work is done. It can feel like the Portlandia episode, she says, where they “put a bird” on everything.

“‘Just put a bud on it!’” she says, laughing. “‘It’ll look great, right?’ Well, maybe, but maybe not. I’m all about pleasing the client, though, so whatever it takes.”

This Is What Legal Cannabis In New York State Could Look Like
The Dirt On Dirt: Is Soil Best For Your Next Cannabis Grow