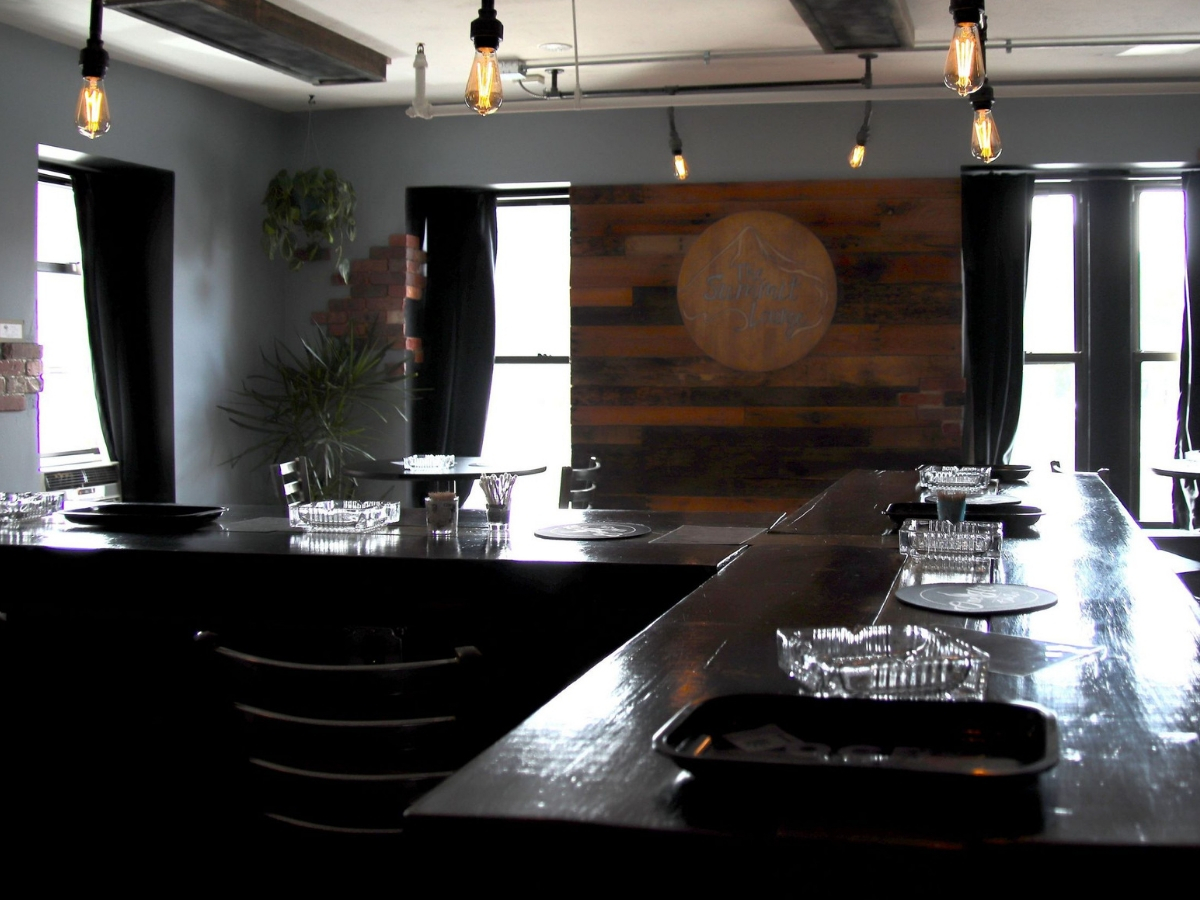 An NFL game illuminates a big-screen television on the wall and swing music plays from ceiling speakers, as more than a dozen people enjoy slices of steaming-hot pizza from a next-door restaurant. Fans of both the LA Rams and Kansas City Chiefs gather around the TV for kickoff, while others in the cozy indoor facility sit on a side couch in front of their laptops, placed across several coffee tables. A woman in her mid-20s reclines peacefully in a heap of pillows, wireless headphones covering her ears.

The scene inside a legal marijuana lounge in 2018 varies greatly from what previous generations may have associated with legalized cannabis, according to Tom Powers, who owns and operates San Francisco’s Harvest Dispensary and its attached facility for ingesting the plant.

After a complete interior makeover that included the addition of four chandeliers, a wood-grain panel wall, a large tile floor, bright-blue wall paint, an array of modern furniture, and a state-of-the-art ventilation system that removes the cannabis odor, Powers’ facility now primarily attracts women, seniors and millennials of all cultures and backgrounds.

“Our lounge is very inclusive by nature,” Powers says. “It’s a great representation of the industry as a whole and what legal marijuana stands for.”

Harvest is one of an increasing number of consumption facilities to flourish in the expanding legal cannabis industry across 33 US states. While San Francisco has had as many as 10 open-consumption lounges over the past decade, other major cities in cannabis-legal states are opening facilities for the first time.

Rita Tsalyuk, owner of the boutique-style The Coffee Joint in Denver, has seen her consumption establishment grow from 400 daily customers when it opened in April to an average of nearly 550 per day as of November. Overlooking the South Platte River, The Coffee Joint allows patrons who bring their own products to vape or enjoy marijuana edibles for an entrance fee of $5, or if they enjoy products purchased at the next-door dispensary, they can hang out for free.

Kyle Moon opened The Summit Lounge in Worcester, Massachusetts on February 8, with a goal of providing a relaxing social environment for cannabis consumers in the greater Boston area. A membership-only club, The Summit Lounge has averaged 25 new monthly members each month since its opening, and as of December 9, was up to 210 such members. Members pay $15 each month plus a $5 user fee for each visit to the club, while guests are charged $15 per visit.

The three business owners all say they’ve had minimal issues in growing their lounges into successful businesses, despite perceived threats from federal government officials. Each said they could count on one hand the number of visits by law enforcement authorities to their respective facilities, and that includes early visits by police as a result of neighboring businesses complaining about odor from marijuana smoke. In response, both The Coffee Joint and The Summit Lounge implemented state-of-the-art ventilation systems similar to the one that has helped Harvest stay in good graces with local authorities.

However, local laws have each of the three consumption lounges playing by different sets of rules.

To prevent illegal cannabis from entering consumption lounges, San Francisco officials require that only product purchased in dispensaries owned by consumption lounge proprietors be used in the respective lounges. Denver limits lounge consumption of cannabis to edibles and vaping — smoking and dabbing are banned — and Massachusetts essentially has no regulations, as long as the quantities of cannabis consumed are equal to or less than the legal limit.

Denver’s restrictions have hindered The Coffee Joint’s ability to attract customers, leaving private residences as the only places in Colorado where one can legally smoke the plant. Tsalyuk says she has to remind “at least a few” customers on a daily basis that smoking cannabis inside her lounge is illegal.

“It’s confusing for our tourists especially,” she says. “We’re known for being a marijuana-friendly city and state, but unfortunately the laws haven’t completely kept up.”

Senator Tick Segerblom (D-Nev.) has kept an eye on facilities in Denver and elsewhere, after the Silver State decided to pump the brakes on an initiative for cannabis consumption lounges in the 2017 legislature. Elected last month to the Clark County Commission — a powerful local body whose jurisdiction includes all of Southern Nevada — Segerblom hopes to bring new lounges there by early 2019, while keeping in mind the pitfalls that have slowed both Denver and San Francisco.

“First of all, we’d allow for smoking, dabbing, eating, vaping — anything you want to do that’s legal by state law,” Segerblom says. “Then we’d talk about serving food and having a separate area to use tobacco or drink alcohol for people that want to do that.” 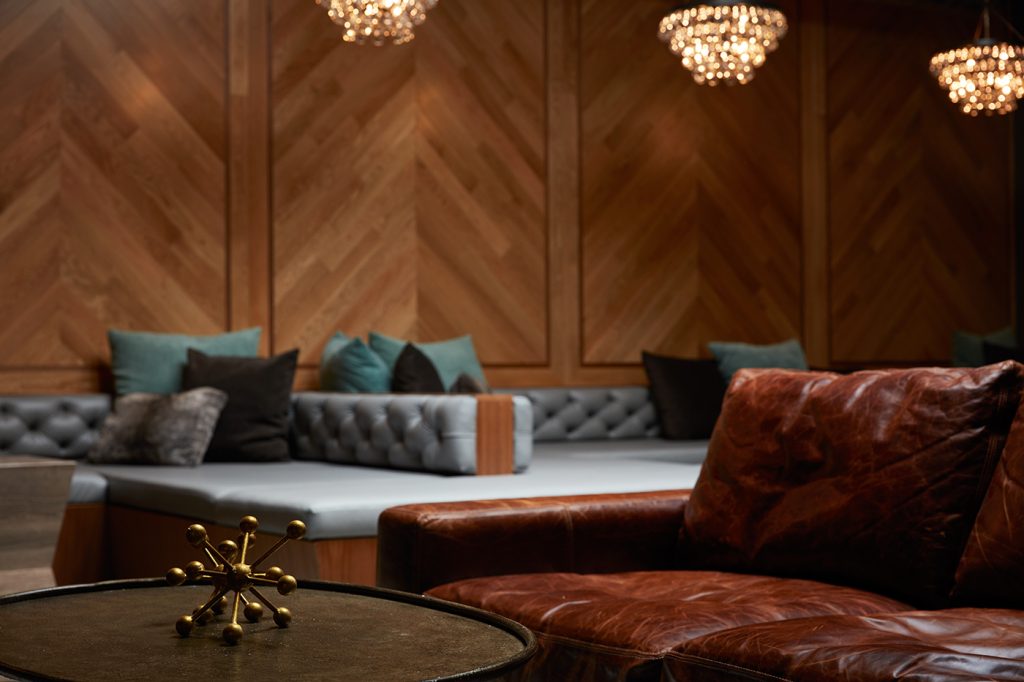 San Francisco’s Harvest Lounge is a members-only space for the smoking and vaping of products purchased at the Harvest Dispensary. (Image courtesy of harvestshop.com)

Once threatened by US Department of Justice policies under former Attorney General Jeff Sessions, Segerblom suggests the cannabis industry may “breathe a little easier” under William Barr, who held the position under George H.W. Bush and was nominated this month by Donald Trump. At very least, Segerblom says, Barr may avoid the same anti-marijuana rhetoric as his predecessor.

Sessions’ ouster has also made officials in the city of Las Vegas more optimistic about the future of cannabis lounges. Councilman Bob Coffin last week introduced a city ordinance similar to what Segerblom plans to draft in Clark County. The Las Vegas ordinance could be up for a vote on the city council’s December 19 agenda and, if approved without any hiccups, implemented by January, Coffin says.

For the Nevada officials, implementing cannabis lounges means “doing it big,” as is the way in Las Vegas. Standing inside Harvest during a fact-finding trip to San Francisco, Segerblom said the fully developed lounges would be larger and include more “bells and whistles” than the 1,000-square-foot California facility.

Segerblom cited the recent opening of Planet 13, a 16,000-square-foot mega dispensary in Las Vegas with more than $2 million in entertainment expenditures — including a laser graffiti wall, giant light-up lotus flowers on the roof, and inflatable orbs that circulate around the facility’s ceiling — as examples of what marijuana lounges in Sin City may soon look like.

“I would think something like Harvest, while great, would be on the small end for Las Vegas,” he says. “We have different expectations with all the tourists that want the latest and greatest.”

Despite the upward trajectory of cannabis lounges across the country, officials in cannabis-legal states say such facilities still face a substantial threat from the federal government. San Francisco alone has seen three city-legal dispensaries closed by US authorities since 2011, says Nicole Elliott, director of the San Francisco Office of Cannabis. Those closures came due to seemingly small violations — odor problems, rent not being paid on time and federal tax issues.

“The feds will do anything they can to intervene when our lounges are out of line,” Elliott says. “Until the plant becomes federally legal, we just need to hold our breath and operate properly to show this is a legitimate industry.”