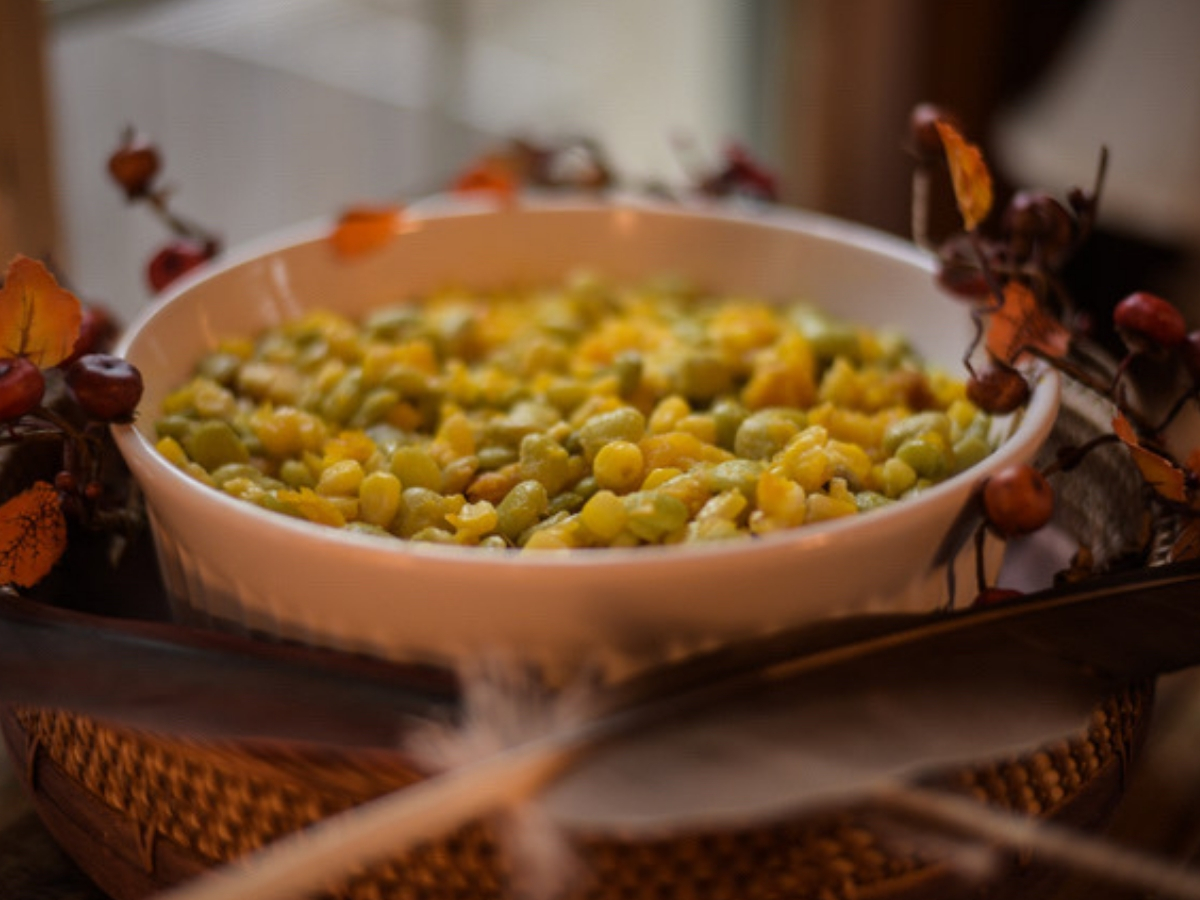 During ancient times in the Americas, Native Americans cultivated pumpkins along creek and river banks with crops such as sunflowers, beans, then eventually corn. From this emerged the tradition of the Three Sisters, which represents the three main crops grown by various indigenous groups of North America. Traditionally, pumpkins were grown with corn and beans because the three plants mutually benefited each other. In this relationship, the corn created a natural trellis for the bean vines to grow along, while the beans created nitrogen-rich soil and stabilized the corn stalks during high winds. Meantime, the pumpkin vines regulated moisture in the soil and also prevented weeds from infesting the ground, which could rob the Three Sisters of valuable nutrients.

As part of what many believe to be the “First Thanksgiving” of 1621 and other early Pilgrim celebrations including Forefathers’ Day, British settlers in Plymouth, Massachusetts were said to have enjoyed succotash among other local tastes and traditional English dishes.

This Thanksgiving holiday, we’re honoring our Native American brothers and sisters with an Unthanksgiving Day feast, including a traditional succotash side dish infused with the stimulating, cerebral strain Maple Leaf.

The name succotash comes from the Narragansett word sohquttahhash, meaning cracked or broken corn, Narragansett being an Algonquian language spoken by the native people of the Rhode Island region. Succotash is also thought to be derived from the word misickquatash, meaning “ear of corn.”

During the harvest time, the Three Sisters became a staple meal, combining corn, beans, squash or other vegetables such as peppers into a delicious late-fall to early winter stew. This traditional food was prepared over an open fire in earthen cooking pots in a time long before settlers ever stepped foot onto the land. It was then taught to the early settlers, who later added ingredients such as butter, cream, pork and okra. During the Great Depression, succotash soared into mainstream popularity as it was economical for families to prepare and a nutritious meal they could survive on.

Maple Leaf is a 100-percent pure indica strain that has a syrupy sweetness encompassing spice and earthy notes, which makes it a complementary flavor profile to the Three Sisters crops, especially the sugar pumpkin. Maple Leaf possesses an incredibly strong narcotic high that is perfect for combating chronic pain, muscle spasms, anxiety, nausea and migraines. Because of its ability to also promote restful and sound sleep, it is also perfect for treating insomnia. The Maple Leaf high starts with a glint of insightfulness akin to a creative spark right before the sleep-inducing properties take over. Serve this succotash with a late-night dinner for the perfect nightcap.

Ingredients You Will Need:

Step 1: Melt the infused tallow in a small stock or sauce pot over medium heat.

Step 2: Add the corn, lima beans, wild onions, salt and pepper. If you desire garlic, now is the time to add it. Minced, chopped or powdered garlic will do just fine. Turn the heat up to high while constantly stirring for 2–3 minutes.

Step 3: Turn the heat down to low, then add in the water and maple syrup if desired. Simmer this mixture for 15–20 minutes or until the water has reduced three quarters of the way. Be sure to stir this mixture during the cooking process.

Step 4: Add the cubed, cooked sugar pumpkin to the mixture and gently stir with a spoon. Warm the pumpkin, then serve immediately.

Dosage: If one gram of flower tests at 18 percent THC, then 18 percent of 1,000mg would be 180mg, so this recipe would have 180mg of THC in it. To figure out your dosing, sub the number of your THC percentage in the amount of flower you want, and do the math to determine how potent you want your succotash to be. If you want a smaller, less-potent dose, simply cut the flower down to a smaller portion.

Strains that possess sweet, syrupy, earthy, sandalwood or spice terpenes and flavonoids work best with this succotash recipe. The following would be ideal if you didn’t have Maple Leaf handy:

Spice: Not to be confused with the synthetic drug of the same name, the earthy cannabis strain Spice will give you an uplifting body buzz.

Hash Plant: A delicious, earthy indica-dominant strain that’ll relax you and take away your pain.

If you cannot find these strains, don’t panic, just follow your nose and taste buds to find strains that would best complement the dish. And when choosing another strain, keep in mind that the THC percentage will be different, therefore dose accordingly.

Dr. Strangebud Or: How I Learned To Stop Worrying And Love Kush And Indica
Black-Market Harvest: Legalization Forcing Illicit Cannabis Further To The Fringes