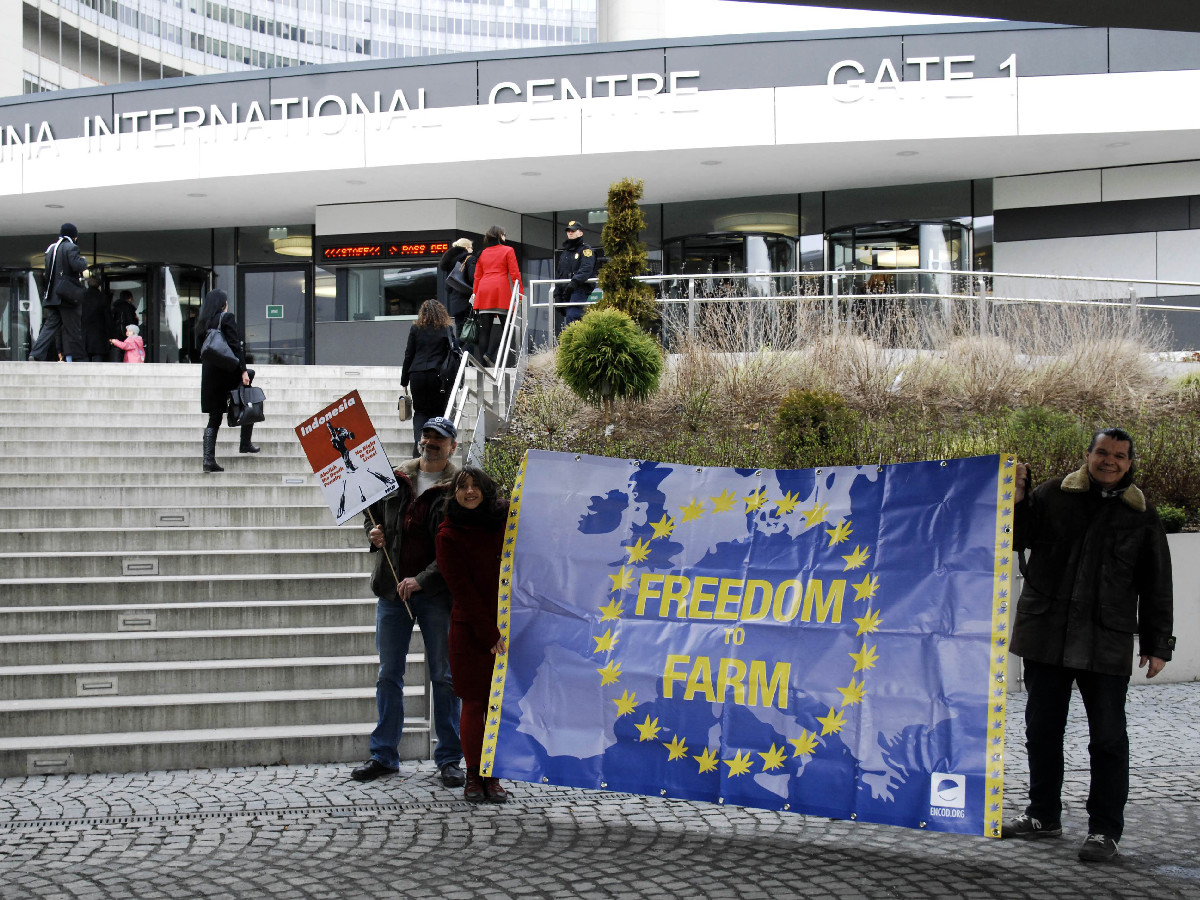 Members of ENCOD protest outside the UN Office on Drugs and Crime in Vienna as part of its Freedom to Farm initiative. (Derrick Bergman)
By Derrick Bergman | Published: November 7, 2018

The road to normalization and legalization of cannabis is different in every European nation. In Austria, where possession and sale of non-flowering cannabis plants has been legal for medical and scientific research purposes for years, a new far-right government is planning to put a stop to all of this by banning clones and seeds outright. Meanwhile, CBD products with no more than 0.3-percent THC are sold all over the country.

This past October at the Cultiva cannabis fair and congress, held in the Austrian capital Vienna, the proposed ban on seeds and clones was a hot topic among vendors and visitors alike. In December 2017, a new government coalition comprised of two right-wing parties, the Freedom Party of Austria (FPÖ) and the Austrian People’s Party (ÖVP), came to power. The coalition is led by Austria’s youngest ever chancellor, 32-year-old Sebastian Kurz, chairman of the ÖVP, who is also the world’s youngest currently serving head of government. This new coalition government’s program translation simply states: Prohibition of hemp seeds and hemp plants. When this ban will take effect is unclear. A spokesperson for Justice Minister Josef Moser told newspaper Kurier it would be “within the legislature [period] in any case.”

The legal cannabis industry in Austria — a country with a population of just under nine million, located in the heart of Europe — has been flourishing over the past decade. The local drug law there does not, as is often thought, distinguish between flowering and non-flowering cannabis plants, but rather, defines for which purpose plants are illegal. If the purpose is to produce a psychoactive drug with THC, then the cultivation is prohibited. This means that cultivating non-flowering plants and producing clones is legal. Call it a loophole or call it logical and consistent lawmaking, the result has been a vibrant legal cannabis industry. 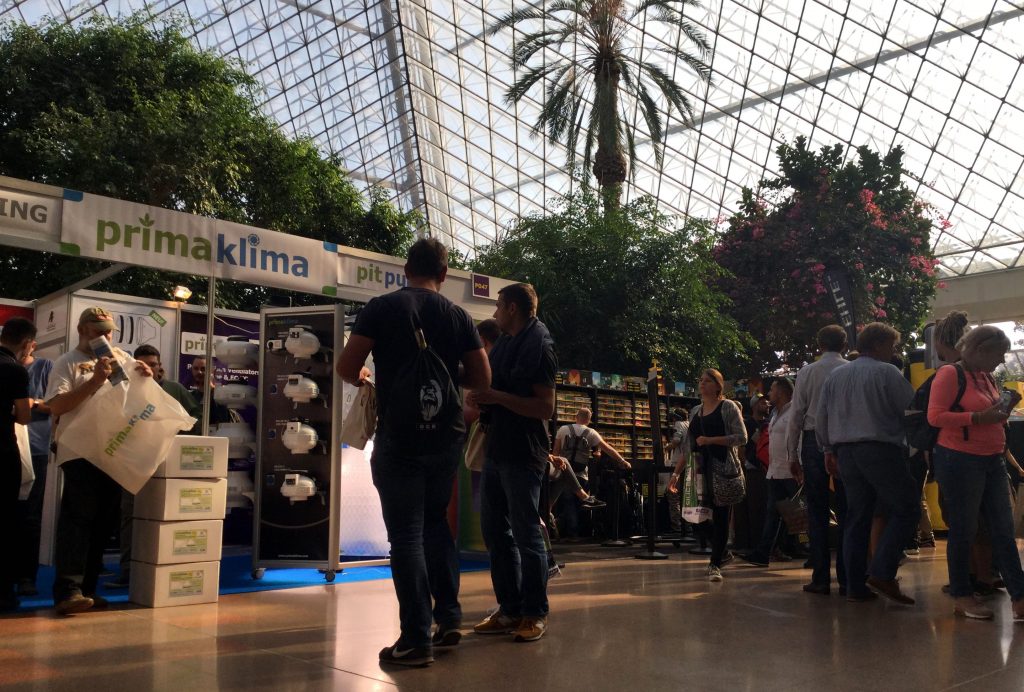 For 11 years, Vienna’s Cultiva expo and convention has been dedicated to all the versatile uses of the cannabis plant. (Derrick Bergman)

More than 70 grow shops in Austria sell clones, seeds and grow equipment, with Vienna boasting a number of “superstores,” like Bushdoctor and Grow City. Specialized companies produce commercial quantities of clones. Up until now, all of this has been legal. The same goes for CBD products with no more than 0.3-percent THC. According to local reports in Austria, some 250 shops now sell CBD products, of which 50 are located in Vienna. Aside from cannabis oil, tinctures and balms, these stores also sell bud and even CBD hash, all of which is locally produced.

Harald Schubert of Bushdoctor is also the founder of the Cultiva cannabis fair and congress, which he launched in 2008. Thanks to its recognizable venue — the glass Event Hotel Pyramid located south of Vienna city center — and impeccable organization, Cultiva has become a firm favorite on the European cannabis calendar.

The big question that was being asked by attendees and exhibitors at the expo was whether the government of Sebastian Kurz intends to crush Austria’s thriving cannabis industry with this potential new ban.

“It was one of the first changes the new government announced in its first weeks in power,” says Erec Kozàr, a veteran cannabis activist living in Vienna. “They seem to be hesitant, though. The legislation for the 12-hour work day was quickly pushed through without any debate. Cannabis has become a flourishing business in Austria — there are many small shops for CBD, as well as big clone farming companies. The ÖVP and its partner FPÖ are as neoliberal as any of the European far right; they do care about prospering markets. One of the biggest cannabis companies, Flowery Field, did not wait. They already moved their business to Italy. That hurt [the economy], I hope.” 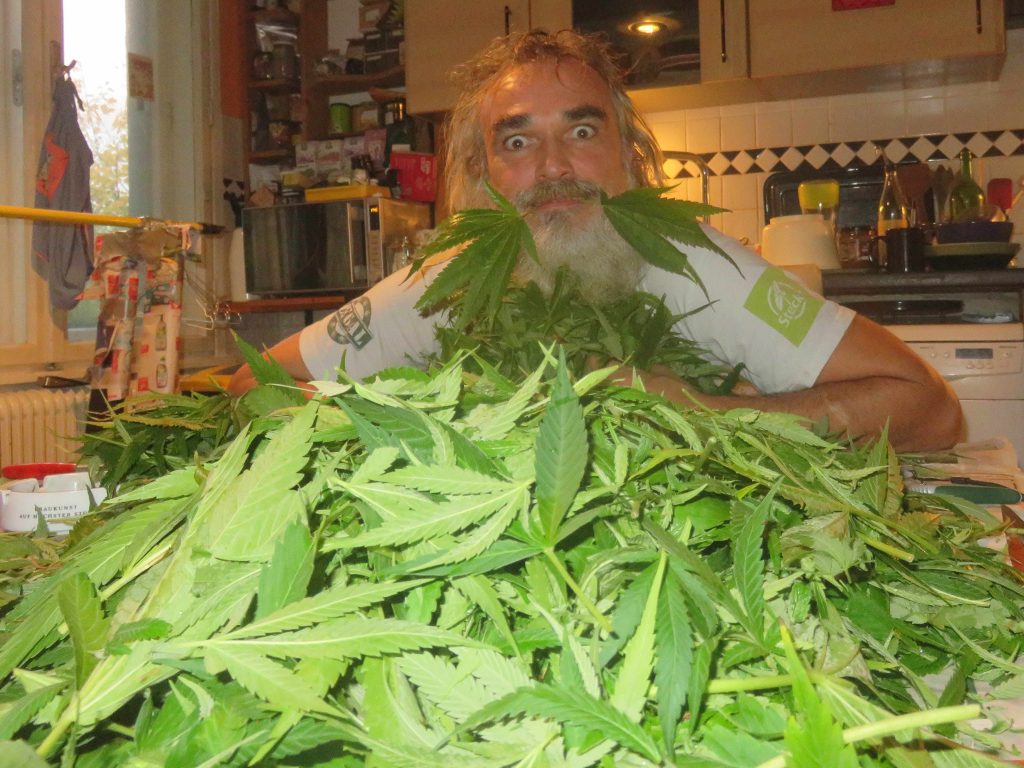 Especially in Vienna, cannabis has become increasingly visible and normalized. You can buy a “weed pizza,” with a few drops of CBD oil sprinkled over it. A company called Dr. Greenthumb installed a vending machine in the city center that “donates” CBD cannabis products. Even that most Viennese of establishments, the konditorei, or traditional coffee and cake shop, has jumped on the bandwagon. As of September, espresso and pastry chain Aida Café Konditorei started selling CBD brownies, topped with a marzipan cannabis leaf, naturally.

“The knowledge about the plant has widely spread, even to the most remote valleys of the Alps,” says Kozàr. “People know that cannabis exists and that it has medical value. But to this day, there is no legal cannabis in Austria, not even for patients. It is possible, with the right doctor, to get a prescription for expensive artificial derivatives, like Dronabinol and Sativex. But reimbursement is erratic, to put it mildly.”

Still, there are signs that the new government in Austria could somewhat relax the laws surrounding medical cannabis.

“According to our associates of Arge Canna, the Austrian patient organization, there is an improvement,” continues Kozàr. “The socialist party of the former government was very close with Big Pharma. After all, Vienna is one of the European centers of the pharmaceutical industry. Peter Kolba of the Liste Pilz party, a [medical marijuana] patient and an activist, says he gets the feeling of being heard by the new Ministry of Health when representing the interests of patients. I think Austria will follow Germany’s lead. As soon as Big Pharma can supply the demand, medical cannabis will arrive in Austria.”

So, what does Kozàr make of the CBD hype?

“A friend of ours runs a CBD shop in Vienna. It is fantastic to enjoy group smoking [of] a joint in front of the store, even when it’s only CBD. Does it help legalization? In the long run, certainly. People smoking joints in public is nothing strange anymore, at least in the bigger cities. Medical cannabis will raise awareness and tolerance of our beloved plant. [But] I doubt that Austria will legalize in the near future — they want to protect the Big Pharma business for as long as possible. Tolerance for illegal private growers is already good in Vienna. That tolerance will grow and spread, unless the law and order faction starts running wild. We [activists] are in for the long haul.” 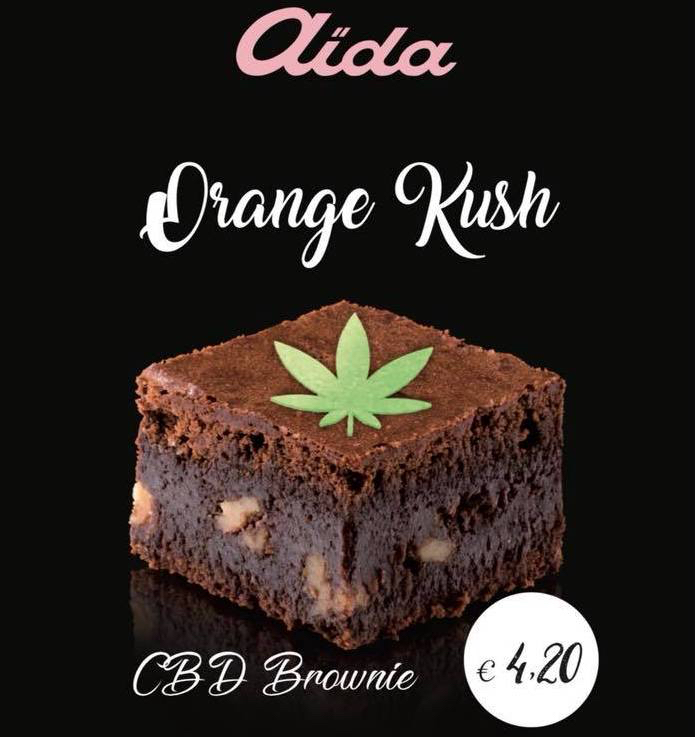 At this year’s Cultiva, the European Coalition for Just and Effective Drug Policies (ENCOD) celebrated its 25th anniversary. Cultiva founder Schubert brought over a big birthday cake to the ENCOD installation and thanked Kozàr and other members present for their work in raising awareness and organizing at the grassroots level. Kozàr has been an active member of ENCOD for years, taking part in numerous campaigns and actions at the United Nations Office on Drugs and Crime (UNODC), headquartered in Vienna. “ENCOD is an organization of individuals and organizations who want to end the war on drugs,” he explains. “Basic human rights are at the core of our policy proposals.”

Although ENCOD, one of Europe’s oldest drug reform nongovernmental organizations, opposes prohibition of all illegal drugs, cannabis has always been its main focus. “We’ve supported and promoted the cannabis social club model, ENCOD members were directly involved in the development of the whole idea,” explains Kozàr. “In 2011, we presented a European Code of Conduct for Cannabis Social Clubs, in order to offer a comprehensive framework for people who wish to follow this. Our most popular campaign at the moment is Freedom to Farm. We consider it a fundamental human right to farm and use any natural plant, be that tomatoes, cannabis, coca or poppy.” 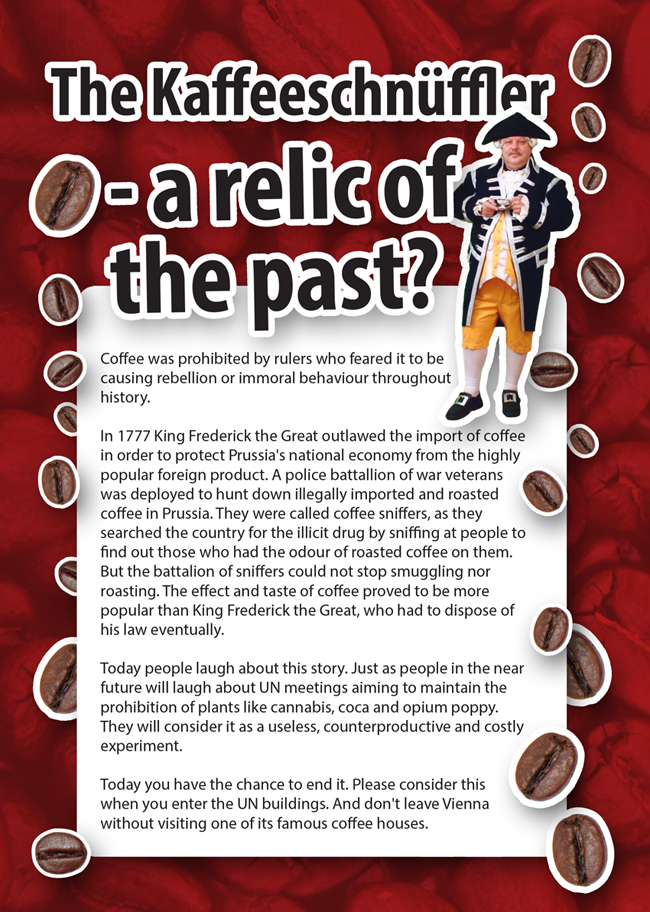 Furthering ENCOD’S anti-prohibition cause, in March 2014, Kozàr played a central part in the group’s Kaffeeschnüffler, or “coffee sniffer” campaign, held at the entrance of the United Nations buildings in Vienna. Dressed up in 18th century Royal Prussian Army uniforms, Kozàr and fellow activists handed out flyers to the international delegates taking part in the annual meeting of the UN Commission on Narcotic Drugs (CND).

The flyer explained how in the year 1777, King Frederick the Great outlawed the import of coffee to protect Prussia’s national economy from this foreign product. A battalion of war veterans were deployed to hunt down illegally imported and roasted coffee. They were called the coffee sniffers.

“Today people laugh about this story,” the text on the flyer read. “Just as people in the near future will laugh about UN meetings aiming to maintain the prohibition of plants like cannabis. … They will consider it as a useless, counterproductive and costly experiment. Today you have the chance to end it. Please consider this when you enter the UN buildings.”

To find out more about ENCOD, visit its website at www.encod.org.