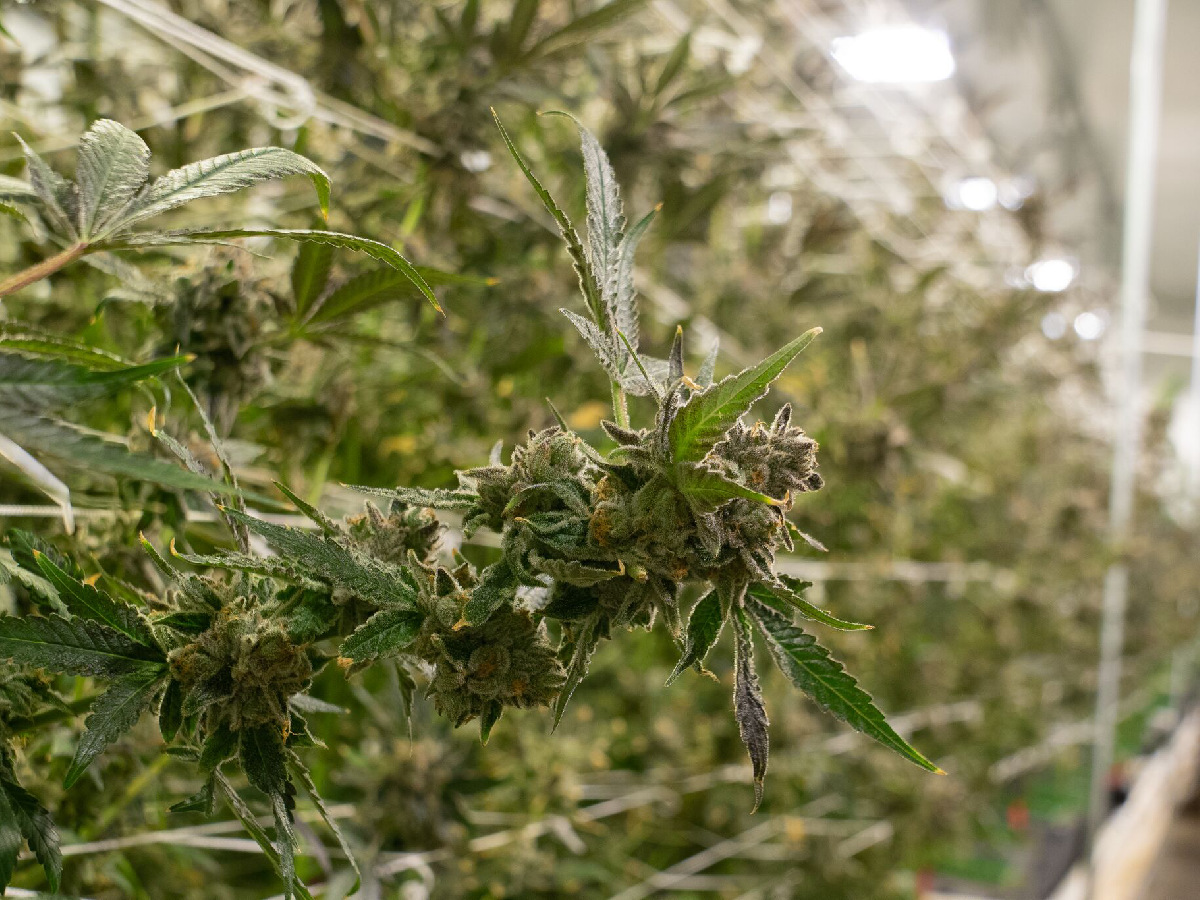 Full disclosure: I’m a cannabis nerd. I geek out over every element of cultivation, from the science of growing to how the ways in which you cultivate particular strains can produce such diverse and staggering effects. And it’s through my own independent plant science research into how environmental and crop inputs affect the production of cannabinoids and terpenoids that I’ve been able to determine why flushing marijuana at the end of bloom phase is so beneficial.

Perhaps the most influential factor is genetics, which account for why one strain smells like diesel fuel and another smells like cherries. You’ll likely experience a couchlock high from strains designated as indica and a stimulating high from strains described as sativa, because variant genetics produce vast differences in cannabinoid and terpenoid type, percentages and ratios.

But genetics isn’t the only factor affecting how potent your buds are.

Armed with the knowledge that genetics, nutrition and lighting are the three main influences of quantity, quality, diversity and ratios of cannabinoids and terpenoids produced by individual cannabis strains, I applied my revelation to my crop cycles, gradually crafting a feeding-lighting-flushing program that works every time.

Simply put, my super crop-boosting cannabis program involves reducing nitrogen and overall nutrition before you do an end flush, adding the right kind of additional lighting at the appropriate times in late bloom phase.

For many years, I would tend to pile on a full-strength feed program until a few days prior to harvest, then do a flush, with no change in grow-light intensity or light wavelengths. When I first implemented my new program, I worried I’d be starving my plants at the same time I was stimulating photosynthesis, making them hungrier by adding extra light. I expected rapidly fading, curled leaves and stressed, starving plants.

Plants’ green leaves tend to develop autumnal colors during late bloom phase, even with full-strength feeding. That same color change often happens during cannabis flushing and is a natural part of a plant’s last days.

However, what surprised me is that with the new regimen, my plants increase bud size, resin gland quality, glandular head expansion and scent production — even while I was reducing their nutrition and blasting them with more light than they’d received throughout bloom phase. Plus, their leaves showed no signs of stress.

My new late-bloom program boosts resin production and plant scent to a measurable degree compared to my previous regimen. Harvested buds are now stickier and more aromatic than before, with a notable taste and potency increase.

Having shared my potency-boosting program with other growers, they’ve seen firsthand in their own grows the increased production of valuable compounds like THC.

So, let’s start by examining the nutritional component of my crop-boosting feeding-lighting-flushing regimen.

Nutrition That Boosts Your Cannabis Crop

You can manipulate your plants to produce more cannabinoids and terpenoids, because genetic expression is malleable. How a cannabis plant expresses its gene coding is influenced by such factors as temperature, humidity, light, water quality and nutrition. These factors (which, in an indoor grow room, are under your control) can stimulate or deter gene expression, thus influencing cannabinoids and terpenoids.

You can choose plant genetics by breeding your own strains and by choosing the strains you procure from others. On top of that, you can control gene expression by altering the environment and feed program you give your plants.

My crop-boosting feeding-lighting-flushing program is based on the fact that in the final weeks of bloom cycle (also known as late bloom phase), cannabis that experiences moderate nitrogen deficit produces more cannabinoids and terpenoids. Research also indicates that a moderate drop in all essential nutrient elements stimulates cannabinoid and terpenoid production.

With this in mind, I crafted my customized feed program for the final weeks before harvest, based on the expected total bloom-phase duration, the condition of my resin glands, and my expected harvest date.

For example, if I have a strain that requires approximately nine weeks in bloom:

These supplements provide a suite of carbohydrates, magnesium, phosphorus, potassium, enzymes, natural chelates and additional compounds that support basic plant functions and resin production, without adding nitrogen or a full nutrient load to the root zone.

Many growers believe the end of bloom-phase flushing is only useful for purging excess nutrient salts and tissue contaminants from plants to promote better taste and usability. Well, yes, cleaner, sweeter crops are among the benefits of cannabis flushing. But by gradually tapering off and eventually ceasing nutrient input during the final weeks of bloom phase, and then doing a Flawless Finish flush, the result is also more cannabinoids and terpenoids. 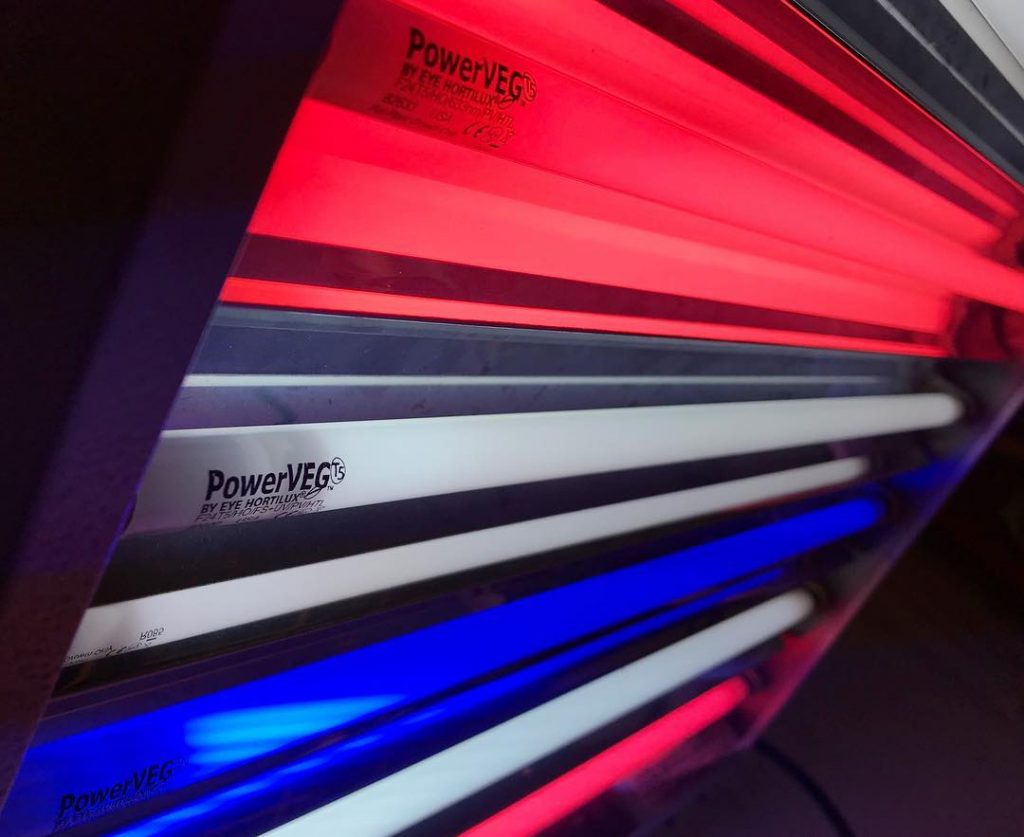 Give Your Plants Late-Bloom Intense Lighting

Cannabis crops produce more cannabinoids and terpenoids when they’re given extra doses of light intensity in the correct wavelengths of ultraviolet, infrared, and red and orange spectrum during late bloom phase while you’re decreasing nutrient feeding.

There are several grow-light options for increasing light intensity and wavelength specificity in late bloom. Start by revising your grow-light footprint. I assume a grow-space footprint of 16 square feet with a 1000-watt grow light, but during the last weeks of bloom phase, I instead assume a 14-square foot profile.

This arbitrary reduction in grow-light footprint means some of your plants will be outside the light’s intensity profile, so you’ll need auxiliary lighting. Adding one four-bulb Eye Hortilux PowerVEG fluorescent fixture or a Lush Lighting LED gives my plants the extra radiation intensity and wavelengths they need to accelerate resin production.

When you add lighting, especially ultraviolet and infrared, be sure to shield your eyes and skin. And whatever you do, don’t let your plants’ leaf surface temperature get too high.

Making The Cannabis Potency Program Work For You

As with any grow-op strategy, there are implementation nuances that depend on your specific plant genetics and mode of growing. Some root-zone media holds nutrients longer than others, which will affect your program. Solid root-zone media like soil and soilless mix are much harder to flush than deep water culture and aeroponic systems. There’s also the target bloom-phase length of your strains to consider. If you have a short-season indica crop that only needs seven weeks in bloom phase, adjust the onset of the program accordingly.

Be aware that your specific gardening circumstances determine nutrient dosage adjustments during this program, because some strains are heavier feeders than others. I’ve grown indica and Kush strains that didn’t like to be deprived of nitrogen feeding in late bloom. I remedied this by adding B-52 vitamin booster or Sensi Cal-Mag Xtra during those final days before flushing. Both provide a small but sufficient amount of nitrogen for strains that demand it, without adding so much that it defeats the cannabinoid and terpenoid boost.

Setting The Trend In California With Gary V At The Hall Of Flowers
South Africa Legalizes Cannabis: ‘We’re Light-Years Ahead Of The USA, Canada And Europe From The Outset’