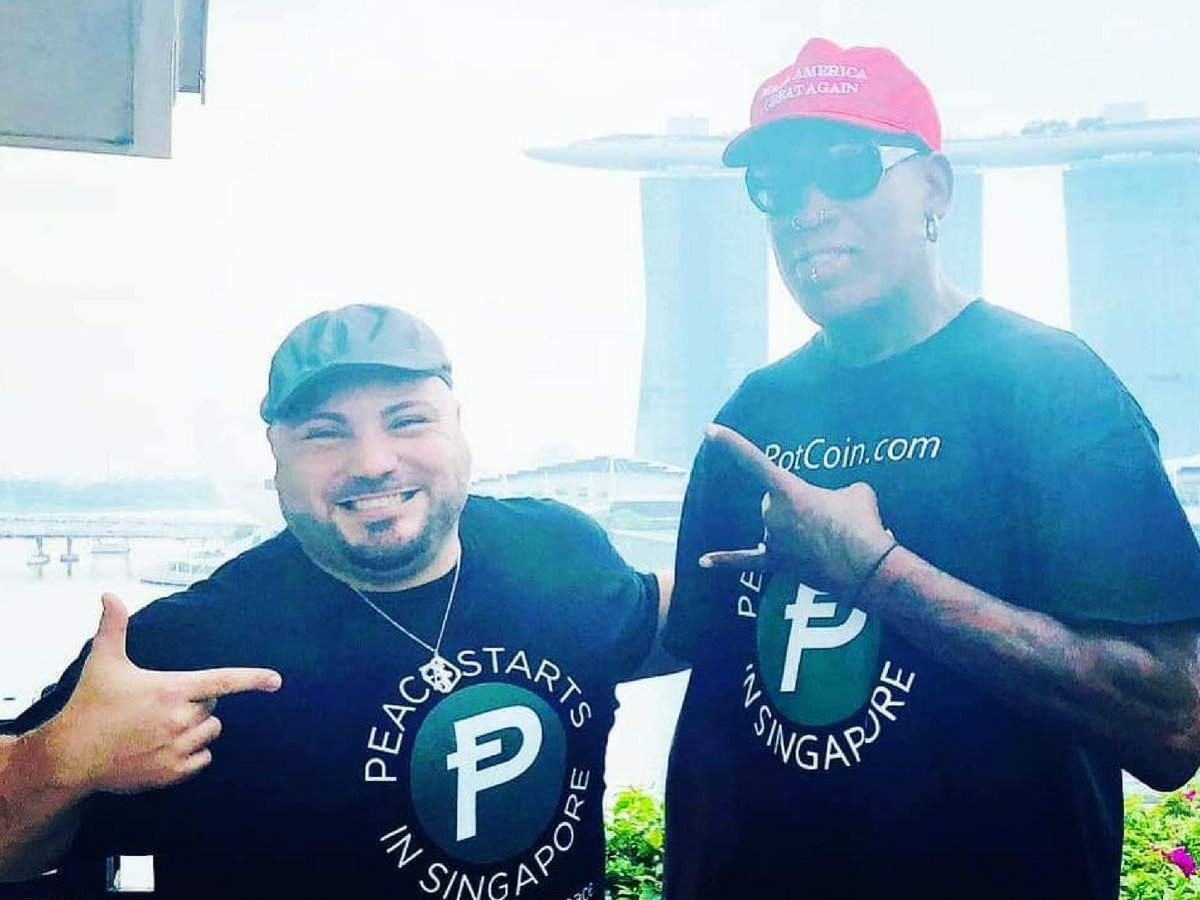 Timed as a publicity stunt to coincide with the summit between US President Donald Trump and North Korean leader Kim Jong Un, Rodman’s visit was apparently a mix of self-appointed political envoy and oddly placed marketing for the cannabis cryptocurrency PotCoin.

This isn’t Rodman’s first rodeo as a walking billboard/political emissary to North Korea.

A few years back — after becoming friendly with Kim during repeated trips to his country for exhibition basketball games — the former Chicago Bulls player was sponsored during one of his outings to North Korea by Irish betting website Paddy Power. That effort imploded for Paddy, after a wave of criticism from the public over the betting site’s decision to align itself with North Korea, a country rife with accusations of human rights abuses. Paddy eventually pulled its sponsorship.

The shirt Rodman sported on this latest excursion, which read “Peace Starts in Singapore,” seemed to allude to a connection with the summit between the two leaders, possibly including a Rodman drop-in.

While Rodman as a physical diplomat in the historic meeting never manifested, his promotional efforts for PotCoin did. Images of his trip to Singapore wearing that shirt were plastered across the global media landscape, offering the cryptocurrency site some pretty choice publicity.

PotCoin spokesman Shawn Perez told The Washington Post, “The PotCoin team as a community has been incredibly supportive of Rodman’s peace mission from the beginning. We’re thrilled to see how the political climate has improved between North Koreans and the U.S. since he became involved.”

In an interview with CNN’s Chris Cuomo this week, Rodman spoke of the Trump-Kim summit, as well as a previous trip he made to North Korea and his difficult return to the US, where some Americans were disturbed by his bro time with the dictator:

“I had to hide out for 30 days. I couldn’t even go home. But I kept my head up high, Brother. I knew things were going to change. I knew it. I was the only one. I never had no one to hear me. I never had no one to see me. But I took those bullets, I took all of that. I took — everybody came at me and I’m still standing. And today is a great day for everybody, Singapore, Tokyo, China, everything, it’s a great day.”

Along with President Trump’s fat shaming of the North Korean leader during a photo shoot at the summit and his suggestion that Kim should erect condos on the beach where North Korea currently tests its missiles, Rodman’s political sojourn on behalf of Pyongyang-Washington relations seems perfectly normal.

It’s debatable whether or not Rodman’s well-intentioned attempts at peace negotiations are merely publicity stunts or if they will have a more significant effect on the relationship.

For the US Department of State’s part, a spokesman confirmed that Rodman wasn’t an official delegate at the summit, telling CNET, “We have no comment on Dennis Rodman’s private travel. He’s not a representative of the US government.”