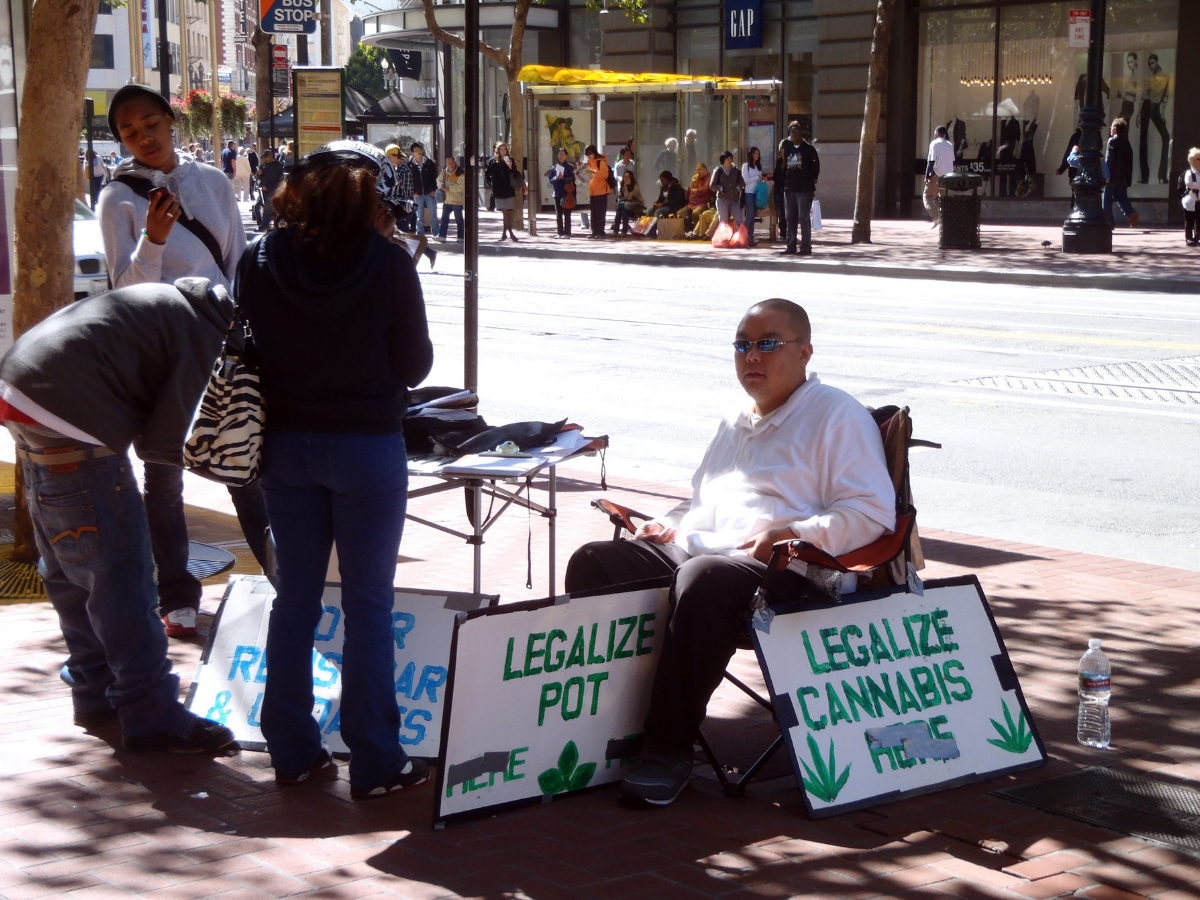 Providing medical marijuana patients safe access to cannabis medicines through acts of compassion would be the shaping value of cannabis legislation in California for years to come. Many sick people have found comfort and relief since Prop. 215 was first established, but today, in light of new regulation allowing responsible adult use to be implemented, many of these early activists believe cannabis legislation is moving away from the original philosophies established in 1996: Compassion and safe access.

To understand why activists believe Proposition 64, or the Adult Use of Marijuana Act, moves away from compassionate safe access, it’s important to first look at the history of California’s cannabis movement.

The AIDS epidemic hit San Francisco hard in the ’80s. Misinformation caused a backlash of fear, leading to discrimination and abuse of AIDS patients and those communities most affected by the virus — gay men, intravenous drug users and prostitutes. AIDS patients were treated badly by society. Few people wanted anything to do with them and many patients were told they deserved to die because they were gay. They were discriminated against not only in medical treatment but also in employment and housing.

There was no safe access to medicine. Antiretroviral medication zidovudine was the first effective treatment for AIDS, but wasn’t approved by the US Food and Drug Administration until 1987, so up until that point, access to medications for patients was restricted to those enrolled in clinical trials.

As a result, people were getting unapproved medications from black-market dealers in local parks, where they risked assault or theft. This was a time when gay men were already being assaulted in the streets and back alleys in random attacks by multiple assailants. Everyone knew someone who was sick or had died of HIV/AIDS. Those with the disease watched their loved ones succumb to the sickness, not understanding why they survived and those they loved did not. During this period in San Francisco, since 1981 more than 20,000 people died of HIV-related complications.

Proposition 215 was written to provide not just cannabis medicine to those in need, but to also offer a safe place to consume such medicines with others similarly affected. Medicine could be purchased on-site or given away, with cannabis gifting to sick people who could not afford medicine viewed as highly beneficial, seeing as the cost of cannabis medicines was never covered by insurance and still isn’t to this day. Providing safe spaces for patients to congregate with others and consume cannabis would be a driving force through many legislative changes to come.

In 1975, the Moscone Act represented the first legislation to decriminalize cannabis, with California becoming the fifth state to end arrests and jailing of people for possession of small amounts of personal-use marijuana. The first attempt at safe access occurred also in the ’70s, with Peron providing cannabis medicines to those in need, along with a safe place to consume said products. The Big Top marijuana supermarket was located in an apartment at the corner of 16th and Sanchez, in the heart of The Castro, and was considered a cannabis speakeasy, where patients were allowed to congregate. Then, on July 20, 1977, Peron’s Big Top was raided. At the time, it had actively served an estimated 6,000 customers.

In the years after the Big Top closed, Peron watched his partner Jonathan West wither away until his passing from an AIDS-related illness on September 29, 1990. At the time, there was no regulation with regard to medical marijuana, but the following year, 80 percent of San Francisco voters approved Proposition P, which called for California politicians to craft legislation allowing for the use of medical marijuana. In 1992, police were instructed to consider medical cannabis consumption and cultivation a low priority, although growing at home was not an option at this point. West’s death inspired Peron to write legislation and collect signatures to get the proposition on the ballot. (California is a direct democracy state, allowing voters to initiate legislation.)

The next attempt at safe access happened at 194 Church Street in 1992. Everyone knew someone who was sick, which helped activists gain support from law enforcement and city officials to open San Francisco Cannabis Buyers Club, the first dispensary in the US. San Francisco’s mayor at the time, Willie Brown, and District Attorney Terence Hallinan supported cannabis clubs, with the idea these early dispensaries operate discreetly and remain under the radar. The federal scheduling of cannabis in the most restrictive category meant officials were willing to allow compassion, but only with extreme caution.

It was very difficult to find a landlord who would risk housing a medical marijuana business. Peron was adamant the lease contain language acknowledging that cannabis was to be sold, given away and consumed on the premises. There was such a large clientele from the Big Top who had to go back to black-market dealers after its closing, so the new location at Church Street flourished immediately. Soon, a larger space was necessary to accommodate the high number of patients who flocked to the Buyers Club. In 1994, the compassion center moved to Market Street and remained there until it closed several years later. Setting the success of these businesses encouraged others to follow suit. By 1999, there was six dispensaries operating in the Bay Area in spite of the constant threat of federal raids. Prop. 215 was three years old at this point. It was then that activists moved to provide an extra layer of arrest protection through the state-issued Medical Marijuana Identification Card Program.

“We as police officers are bound to uphold the law,” Sanders said in 2000, “and 215 passed the last time I checked the law.”

Prop. 64 was voted into law in the November 9, 2016 electoral session, with more than 57 percent voter approval. This law allows anyone over the age of 21 to possess up to one ounce of cannabis, cultivate up to six plants in their home, and purchase cannabis product from a state-licensed dispensary. While all of this may seem like a good thing for the residents of California, activists who have long fought for safe access to medical cannabis are not convinced the law preserves compassionate care for patients.

San Francisco activists have always been proponents of removing cannabis from the Drug Enforcement Administration’s Schedule I of controlled substances. Legislators and officials have always hidden behind the fear of federal retaliation. This stigma has slowed progress. Until cannabis is removed from definition in the Controlled Substances Act, politicians will continue to use the potential of federal interference as an excuse to avoid focusing on safe access.

Activists like Peron and Justmann never wanted regulation, keeping the language of Prop. 215 legislation intentionally vague. Too many regulations impede the natural course of doing cannabis-related business. Rather, these early activists have long believed people should be allowed to consume cannabis unimpeded and as necessary based on individual need. Most important was the need to preserve the higher ideals of compassion in the Compassionate Use Act: Patients serving patients.

These same activists believe that Prop. 64 moves away from compassionate use and find themselves engaged in a battle with legislators to preserve what’s left of patient rights slowly being eroded. Compassionate care programs have been stripped of their ability to distribute medicine to those in need and at no cost, because of the strict seed-to-sale guidelines. Several organizations serve the community by acquiring cannabis medicines as charitable donations to be given to patients in low-income brackets who could not afford these medicines otherwise.

Prop. 64 dictates these organizations take monetary donations and purchase medicines at state-licensed distribution centers to provide relief to their clientele. This increases the cost significantly, with a 15-percent excise tax for retailers. Cultivators are required to pay $9.25 for every ounce they produce. As a consequence, many compassionate care programs have stopped providing medicine to their clientele until a stipulation is passed allowing these programs to continue.

In addition to the loss of compassionate care programs, cannabis activists point out that current guidelines do not protect patient and grower, classifications are unnecessary only complicating the issue, and lack of oversight over newly formed regulatory agencies is just one of the obstacles preventing safe access. Regulatory agencies are void of industry representation, setting the markets up for corporate takeover. “It’s as if we are moving through the shadows without any light,” laments Justmann, considering the chaos and confusion currently being experienced in the community.

For medical marijuana patients in the state of California, the future is uncertain until these issues can be addressed. Activists remain dedicated to preserving patient rights, working closely with regulators to amend the current law, but without industry representation in regulatory agencies, this could be a timely process. Until then, the fate of compassionate care for California’s most vulnerable residents appears bleak.