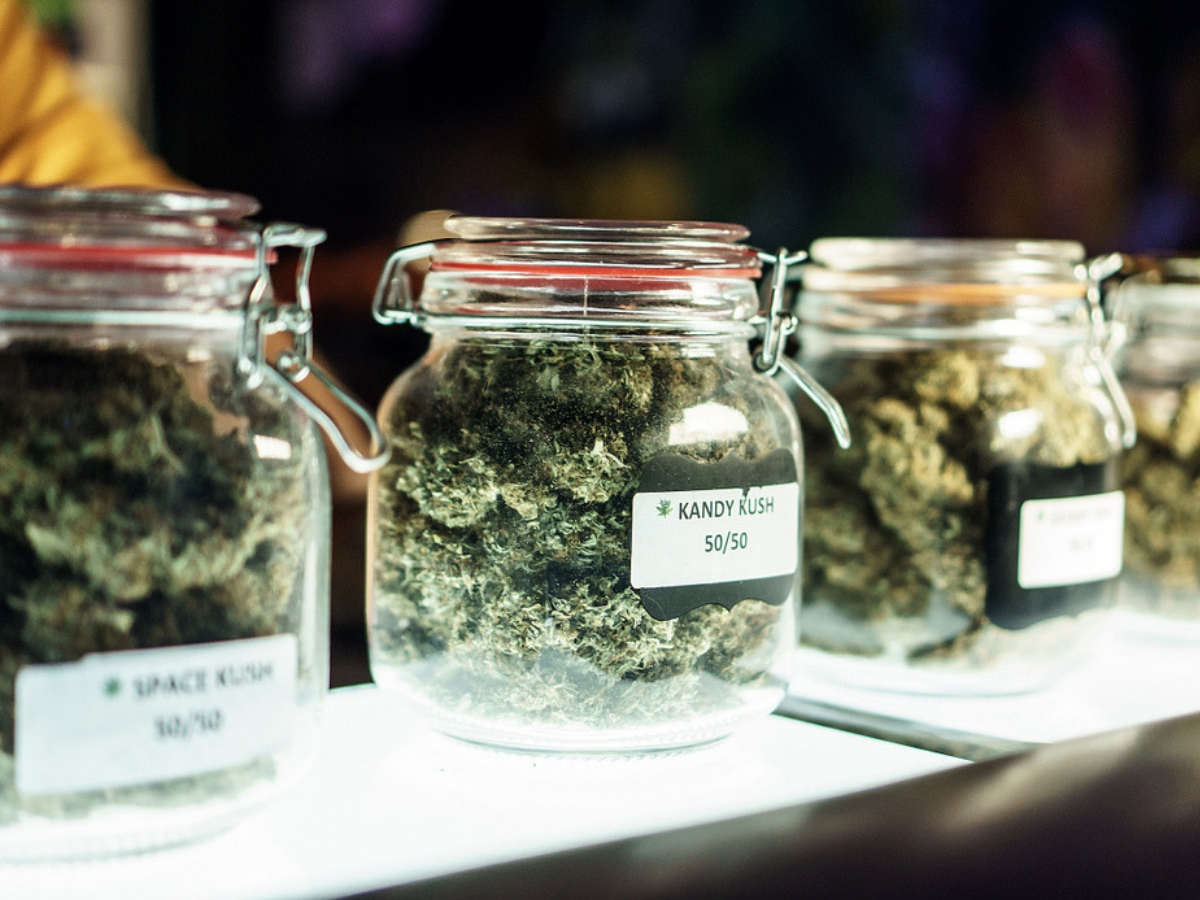 From Thai Stick to Blue Dream to Lemon Haze, cannabis cultivators have always known the selling power behind a good name.

There was a period — during the nascent years of pot smuggling into the United States, circa 1970 — when geography played a vital role in creating a kind of brand awareness around the exotic marijuana that was hitting the shores of America. Arriving from far-off lands, strains like Colombian Gold and Thai Stick were among the big stars of the era — the Montecristos of marijuana. Those early years provided excellent marketing opportunities for weed dealers and smugglers looking to capture the imaginations of North American stoners. The names evoked images of romantic locales and sun-drenched buds swaying in the breeze. It also didn’t hurt that the incoming merchandise packed a pleasing psychoactive punch and provided highs that were different from what most devotees were experiencing domestically at the time.

Nearly 50 years later, murmur the words “Colombian Gold” around some veteran heads and you’ll see them get starry-eyed and reminisce over the days of opening a new bag of good import weed — how catching that first whiff of something different, something peppery or earthy, spoke of heirloom strains from across the world.

“You see OG smokers fall into this dream state when they talk about those landrace strains from back then, like Thai Stick and Colombian Gold,” says cannabis cultivator Tony Bryant. “I like growing varieties that catch some of that feeling of those landrace strains. Nostalgia is a really powerful selling tool.”

Recognizing what they had, many industrious growers and seed breeders in North America and Europe began experimenting with plant genetics in an effort to recreate those infamous highs from the import cannabis. Bag seed provided a start. Because environment plays a key role in the formation of cannabis compounds — which develop in landrace varietals over millennia of outdoor growing — true replication of plants is virtually impossible to achieve in a different climate. Specific soil makeup, fertilizers and weather are just a few of the conditions necessary to reproduce a comparable product.

Which led to the creation of weed 2.0.

What seed breeders eventually came up with would electrify the pot community and usher in a new era of cannabis hybridization — and a new lexicon to go with it. Every flavor of the marijuana rainbow would be created. Since then, countless new phenotypes — or genetic offshoots of those first foreign landrace strains — have hit the market. And the many combinations and permutations of new bud genetics would each get its own name, sometimes based on plant characteristics and heady effects, sometimes based on the wild whims of a cultivator’s outrageous vocabulary.

At first, naming conventions were pretty straightforward and taxonomic. For instance, Skunk #1, a derivative of Colombian Gold, described the heavy skunky smell of the strain and the fact that it was the first of its kind. Later, names would include grower handles and infamous characters on the scene, such as Neville’s Haze, Bubba Kush and Jack Herer. Not to be outdone by the advertising masterminds behind brands like Nike, Teletubbies and Billabong, growers went rogue in inventing catchy names like Chemdog, Granddaddy Purple and Girl Scout Cookies — each with its own fanciful origin tale.

But as today’s cannabis industry develops into a more mainstream marketplace, growers and retailers are becoming aware of the need to speak to a new consumer base that includes many who know almost nothing about cannabis and its effects. 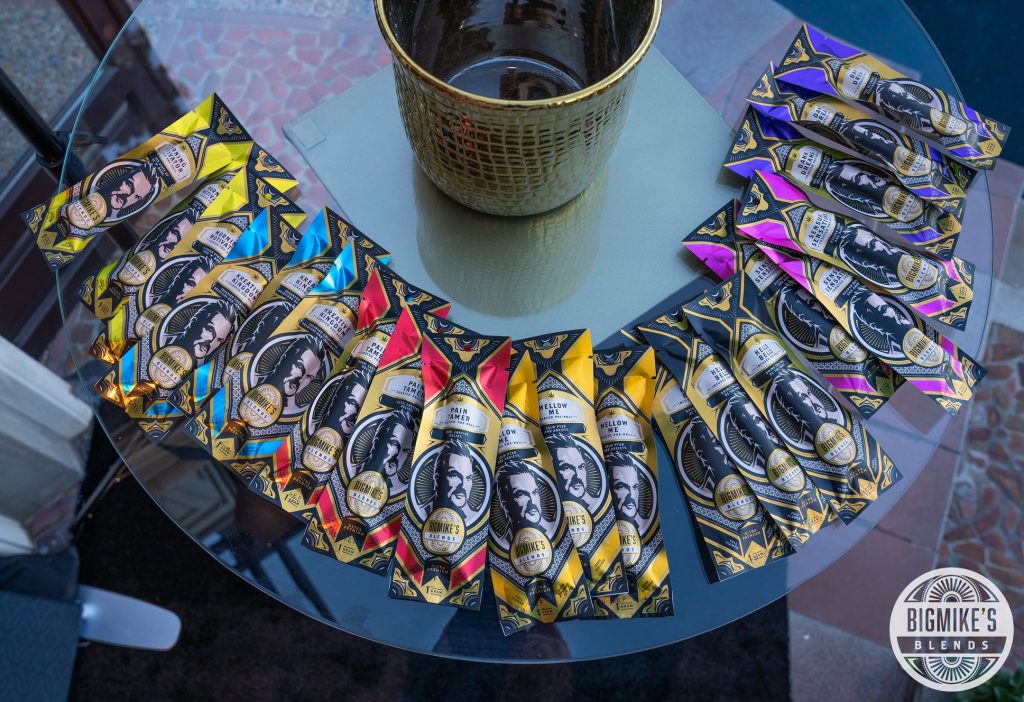 BigMike’s Blends is a range of custom pre-rolls that will run the gamut of desired outcomes, from enhanced creativity to lasting pain relief. (Image courtesy of BigMike’s Blends on Facebook)

The strain names Colombian Gold, GG4 and Sunset mean next to nothing to the average consumer. In fact, they convey so little of the substance’s intrinsic value that they often confuse today’s customers rather than enlighten them.

“Even Sour Diesel, which is of course really popular, is probably a turnoff to your typical buyer at a recreational store these days,” Bryant says. “It probably sounds more harmful than anything, like a drug that will knock you out. Like smoking jet fuel. That just doesn’t sound fun to a lot of people, particularly new users.”

Blue Dream gets a little closer to what consumers might want in a strain description, Bryant says, conveying some notion of desired effects — dreaminess and relaxation — but is still pretty nebulous and ultimately inexact. While Blue Dream sounds like a pure sleep aid, its effects are said to lean more toward sativa-dominant and therefore strikes a balance between relaxing and uplifting.

“I want to feel like I understand what Blue Dream does for me,” says Veronica T., who shares that she’s been shopping at several dispensaries in her neighborhood in San Francisco but hasn’t been adventurous enough — or free enough with her wallet — to buy anything yet. “Like, will Blue Dream make me sleepy and melancholy? I guess I have to just take a chance.”

And that’s the rub: Many cannabis goods on the market today don’t offer customers a clear description that defines certain states of being or desired effects.

However, there are a few forward-thinking retailers that have begun aiming in that direction.

Dosist is a manufacturer of dosed vape pens that’s enjoying a moment in the limelight for its new, simple cannabis products that clearly define preferred effects for users. Its line of targeted products — which includes names like bliss, sleep, calm, relief, arouse and passion — hit just about every possible outcome a consumer might want to attain.

Previously known by the name Hmbldt, in reference to Humboldt County, the region synonymous with high-grade cannabis cultivation, the company changed its name to the more resonant Dosist, taken from the Greek word dosis meaning “an exact portion prescribed.” It was a smart marketing move, as few cannabis consumers in small-town America will have ever heard of Humboldt, or even care that it’s where great pot comes from. It’s irrelevant to them. They just want a reliable product they understand. The new name is softer and smarter, and suggests the pleasant and dependable state of being that the product will provide.

And thankfully, the joint world is getting a shot in the arm with new outcome-based pre-rolls called BigMike’s Blends. Created by cannabis nutrients manufacturer and grow expert BigMike Straumietis, the pre-rolls will run the gamut of desired states, from enhanced creativity to restorative sleep to lasting pain relief.

“I’m proud to present the culmination of 35 years of cannabis cultivation experience, research and development: BigMike’s Blends. These seven pre-rolls have been blended from the world’s finest top-shelf strains, curated personally by me and my team of experts,” BigMike says.

Blends will be available at dispensaries starting in early 2019 and will include Morning Motivator, Hells Bells, Kreative Kingdom, Mellow Me, Pain Tamer, Dank Dreams and Sensual Sensations.

Amid the movement toward cannabis clarity, Bryant admits he’s a little bummed to see the culture of wild strain names coming to an end — at least, on the mainstream retail side of the business. He knows he can still talk with his grower friends about strains like Cereal mYlk and they’ll all know the shorthand, that the “Y” in the middle is in reference to the genetics from a blending of the Y Life strain in the plant.

“But the mainstream doesn’t care about all that stuff,” he laments. “I can geek out on plant genetics with my buddies. But when I talk with retailers, I’m using terms more like blissful, creative-inducing and motivating. It’s just where things are going and where you have to be if you want to keep selling.”

Growing Up: Top Tips From Industry Experts On How To Scale Your Cannabiz
Where Everybody Knows Your Strain: Legal Cannabis Lounges Offer A New Kind Of Hangout