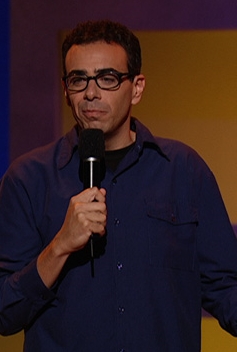 By Eva Stone | Published: June 27, 2011
As the co-creator and performer of The Marijuana-Logues, you can imagine just how much of a pot enthusiast Tony Camin is in life and on stage. “I got hit with a ruler first day of kindergarten—for smoking pot,” Camin once joked during a set, “because if you bring it, you need to bring enough for everybody.”
This San Francisco native has appeared on Late Night with Conan O’Brien and Jimmy Kimmel Live. Camin has performed at the Just For Laughs Festival in Montreal, the HBO U.S. Comedy Arts Festival in Aspen, and the Melbourne Comedy Festival in Australia. He’s also served as a correspondent for IFC’s The Media Project and written for programs on NBC, VH1, and Comedy Central.

Here, the bud comedy veteran recalls his “first time”—suburban pot brownies—and also describes what might be the strangest way a person has ever ingested marijuana.

Big Buds Mag: How does marijuana enhance your comedy or quality of life?
Tony Camin: When writing jokes, I like to have some coffee and a little weed. I believe it’s known as the poor man’s eight ball.

BBM: Tell me about your first time with marijuana.
Camin: First time I tried weed was by accident. My friend’s mom had made some strong pot brownies and put them on the oven to cool. There was a note on them that said, “Do not touch, for bake sale.” We came home from school and ate the whole plate. About two hours later I’m watching the news with my Dad and I couldn’t stop laughing. My friend’s mom called my mom and said that the nuts in the brownies were bad.

BBM: Can you tell me about some of the highlights performing and touring with the comics from The Marijuana-Logues?
Camin: The “high”-lights would be going to Amsterdam and Australia, and of course doing the show off-Broadway was awesome. [I got to] meet tons of cool peeps along the way.

BBM: How do you prefer to consume your marijuana?
Camin: Edibles are my favorite. A nice clean pipe is always good. I’m not picky. I smoked out of a girl’s leg cast once.

BBM: Okay, stop right there. Tell me the story about the leg cast smoke session.
Camin: I was in Eureka, California, maybe 1991 or so, and I met a girl who had recently got her cast removed six weeks after a snowboarding accident. After scouring the house for something to smoke out of she, as a joke, said, “We can use my old cast.”

We laughed. Then after a beat I said, “l know you’re kidding but that’s actually a very doable solution. So I duct taped up the seam of the cast and I drilled a little hole with a pencil near the ankle. It worked like a charm. The girl was so high and happy that after smoking she said, “It was worth breaking my leg for this.”

BBM: Do you typically smoke marijuana before you perform?
Camin: Usually not. Maybe sometimes, maybe always-sometimes.

BBM: Do you have any tours, appearances, shows, CDs/DVDs to mention?
Camin: I’m on tour this summer with Arj Barker from [The Marijuana-Logues]. We’re in Portland now, next week Denver, then Minneapolis. Tell your readers to come down and hang out. Stoner fans are always the coolest.

The Marijuana-Logues book interview with Camin:

The Marijuana-Logues players perform on Real Time with Bill Maher:

For more on Camin, visit www.myspace.com/tonycamin.