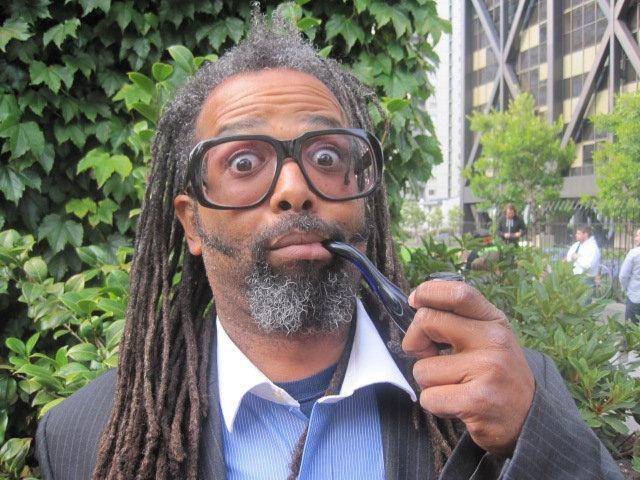 By Eva Stone | Published: June 13, 2011
When it comes to medical marijuana, Ngaio Bealum’s name is right up there with Doug Benson as far as comedians popularly associated with the blessed herb. This Sacramento native has hosted events for High Times and Hempfest, and in the daylight hours, Bealum serves as the editor of the monthly West Coast Cannabis magazine. A typical Bealum set includes jokes about why storing hash in your passport is a bad idea and how pot makes you a better parent.

“My kids smell me smoking pot and they know we’re heading to miniature golf in the next twenty minutes,” jokes Bealum, whose first name is pronounced “oon-guy-o.” “I’m down for any animated feature when I’m high,”

The comic who “sweats hash oil” discusses his very favorite topic, including how he once triumphantly beat a felony hash possession case.

Big Buds Mag: Your sets are very related to marijuana. Now you’re recording a pot comedy DVD. How did your passion evolve into a career?
Ngaio Bealum: It just happened. As I was doing more and more comedy, I also started getting more and more into cannabis activism. There was no conscious decision to become a “Cannabis Comic.” It just worked out that way.

BBM: How does marijuana enhance your comedy?
Bealum: It may make my material a little more introspective, but I don’t really get high with the intent of writing jokes or punching up material. I do think that my cannabis use gives me a “stoner’s perspective” on events and things, but my use is pretty constant and consistent, so I’m not sure. Sometimes weed can give you an insight on how to approach a subject, but I’m not sure.

BBM: How do you prefer to consume your marijuana?
Bealum: Edibles wreck my productivity, so I only use them for long flights or double features. Joint, pipe, bong, vaporizer, blunt—in that order.

BBM: Do you ever get high before your shows?
Bealum: Sure, don’t you get high before work? If it’s a big TV show or DVD taping then probably not, but at a club or a cannabis-themed show or a Hempfest-type event, then hell yes!

BBM: Do you currently have a medical marijuana card?
Bealum: Of course! I think everyone should have one. I used to be from the “I don’t really need it medically, so I don’t want to abuse the system” school of thought, but now I think everyone should have one just for legal protection and to support the cannabis industry. And I do use salves and tinctures medically for aches and sprains.

BBM: Have you ever had to flash your card to the police or other such authority?
Bealum: More times than I would like to admit. I just beat a felony hash possession case a few months ago. The cops tried to say that hash wasn’t protected under Prop 215, so I showed up in court with a copy of then CA ATTY, which is General Bill Lockyer’s guidelines on Prop 215 stating that hashish is in fact protected under the Compassionate Use Act. Case dismissed.

BBM: You’ve toured all over the map, especially for these various Hempfests. How does marijuana culture and attitudes about it differ in the different cities/countries you’ve visited?
Bealum: Marijuana culture is generally the same wherever you go. Some of the kindest, most compassionate, and most creative people I have ever met are a part of the international cannabis community.

BBM: Do you travel with marijuana on you?
Bealum: I usually have some papers or a pipe that I picked up at a festival. I do a lot of driving, so I can carry stuff with me as opposed to flying where [the TSA] wants to go through all your shit all the time.

BBM: Would you like to mention any upcoming appearances, shows, CDs/DVDs?
Bealum: June 15 at The Jon Lovitz Comedy Club in Universal City North Hollywood
June 16-19 at Laughs Unlimited in Sacramento
June 21 at The Wild Vine in Danville, CA
June 25 at The Dutch Girls 6.5 in God Hill
June 26 to July 2 at The Aroma of Tacoma Cup in Tacoma, WA

For more on Bealum, visit www.twitter.com/ngaio420 or find him on Facebook.