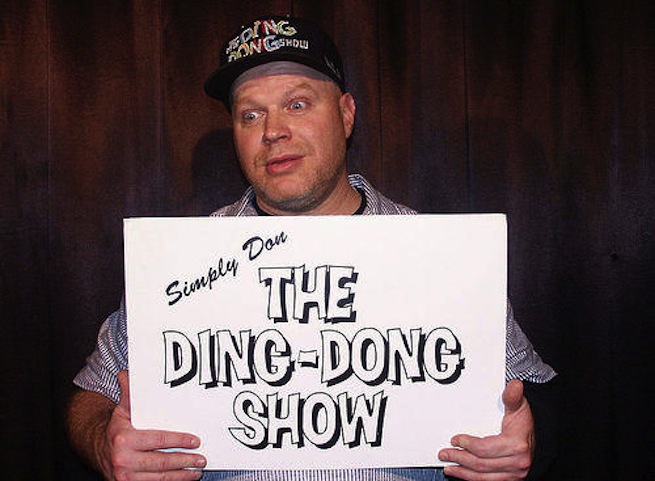 By Eva Stone | Published: August 2, 2011
Not only is Don Barris the man behind The Ding Dong Show, the longest-running show at the Comedy Store Monday nights, he closes the Store every night with his spontaneous, outrageous act. Despite this fact, he does not consider what he does onstage as traditional standup comedy.

The Saginaw, Michigan native found a patron saint in Jimmy Kimmel. The late-night talk show host has championed Barris throughout his career, employing him as his audience warm-up person for Win Ben Stein’s Money, The Man Show, and Jimmy Kimmel Live.

In the ’90s, Kimmel was working at KROQ and he became a fan of a public access show featuring the Big Three—Barris, “Scary” Perry Caravello, and Walter “Mole” Molinski. Inspired, Kimmel executive produced Windy City Heat, a Comedy Central reality TV movie directed by Bobcat Goldthwait and starring the Big Three in 2003. The film was basically an elaborate practical joke on the gullible, shrieking “Scary” Perry and it soon became a cult hit and a favorite of stoners.

Big Buds Mag: Out of the Big Three, how does each of you respond to marijuana?
Don Barris: It’s almost like see no evil, hear no evil, and speak no evil because we’re all different. Mole is a complete stoner. I’ve seen Mole do everything. Perry doesn’t do it at all. I’m somewhere in the middle.

BBM: How does marijuana enhance your comedy or quality of life?
Barris: I think medical marijuana is the greatest thing in the world. It’s wonderful. I know people who live by it and it’s the way they get through their day. To me, it is the craziest law there is that everyone cannot partake in this. I think it is safer than so many other things going on. I think it’s the mellowest thing ever. It doesn’t inspire violence. If anything, all it does is it inspires creativity.

I close out the show at the Comedy Store every night. You have to be very outrageous, so that’s the way I went. I think a lot of that stuff comes with getting into deep concentration, so with that, absolutely [marijuana] helped out.

BBM: What makes for the best possible dispensary? What are some of your favorite dispensaries?
Barris: The closest one to my house. I think the least I have to travel to go there.

If I can remember before dispensaries became so popular, you had to wait for someone to come by your house. You had to plan for a week in advance. Now I live near Santa Monica and La Cienega and literally within a mile there are like six of them.

BBM: How do you prefer to consume your marijuana?
Barris: I would say the best way is the vaporizer because the lack of smoke. We’ve accomplished what we came to do. The only bad thing is it takes so long to set up.

My first edible I ever had was a Bliss Maryjane Candy Bar. I was like, “Wow, I can have candy and feel very good at the same time.” Maryjane Green is actually the producer for The Ding Dong Show.

BBM: The Ding Dong Show has been going on since 1992. Has the show’s format evolved over the years?
Barris: Not really. We’ll do different things. But the format is a reality show based on different acts. It might be a song. It might be a poem, a joke, nunchucks—it’s a variety show. There’s a ventriloquist. I do have very colorful characters in it.

BBM: How did you initially get into comedy?
Barris: When I lived in Michigan I worked as a disc jockey that played at frat parties and weddings and things like that. I was always the funny guy but I found that I could make people laugh and get things going through those DJ gigs, but if the joke didn’t work I always had the song cued up to go.

BBM: What’s going on with The Big Three Podcast?
Barris: We’ll do the rest of the shows with Adam Carolla’s network (A.C.E.) in July and in August we’ll begin recording on my own network. It’s called Simply Don the Podcast Network.

We’re building a studio where I’m not only going to put out The Big Three Podcast, but I’m going to bring in The Ding Dong Show Podcast and I’m going to bring in some other comics. We already have the Leeds guy advertising for us. I think we’re doing something that’s really fun. Podcasts are great since people listen in their cars on their iPods, so I think it’s a media art form which is just beginning. It’s kind of the wave of the future. I really admire what Marc Maron has done with his podcast.

The Big Three Podcast on the Adam Carolla Entertainment Network:

BBM: Are you working on anything else?
Barris: I’m working on a low-budget horror film called Last House at the End of the Street Where People Say You Shouldn’t Go Because Something Bad Could Possibly Happen to You. It’s a sexy comedy with a lot of stuff. I’ll include some things with the Big Three, the Ding Dongers, funny people I know, and actresses that I know and combine all these ideas and have it so low budget that all I have to do is show a profit on it and then I’m a moviemaker.

The History of Jacks Cleaner, One Of The World’s Top Marijuana Strains
More Light for Your Marijuana = More THC