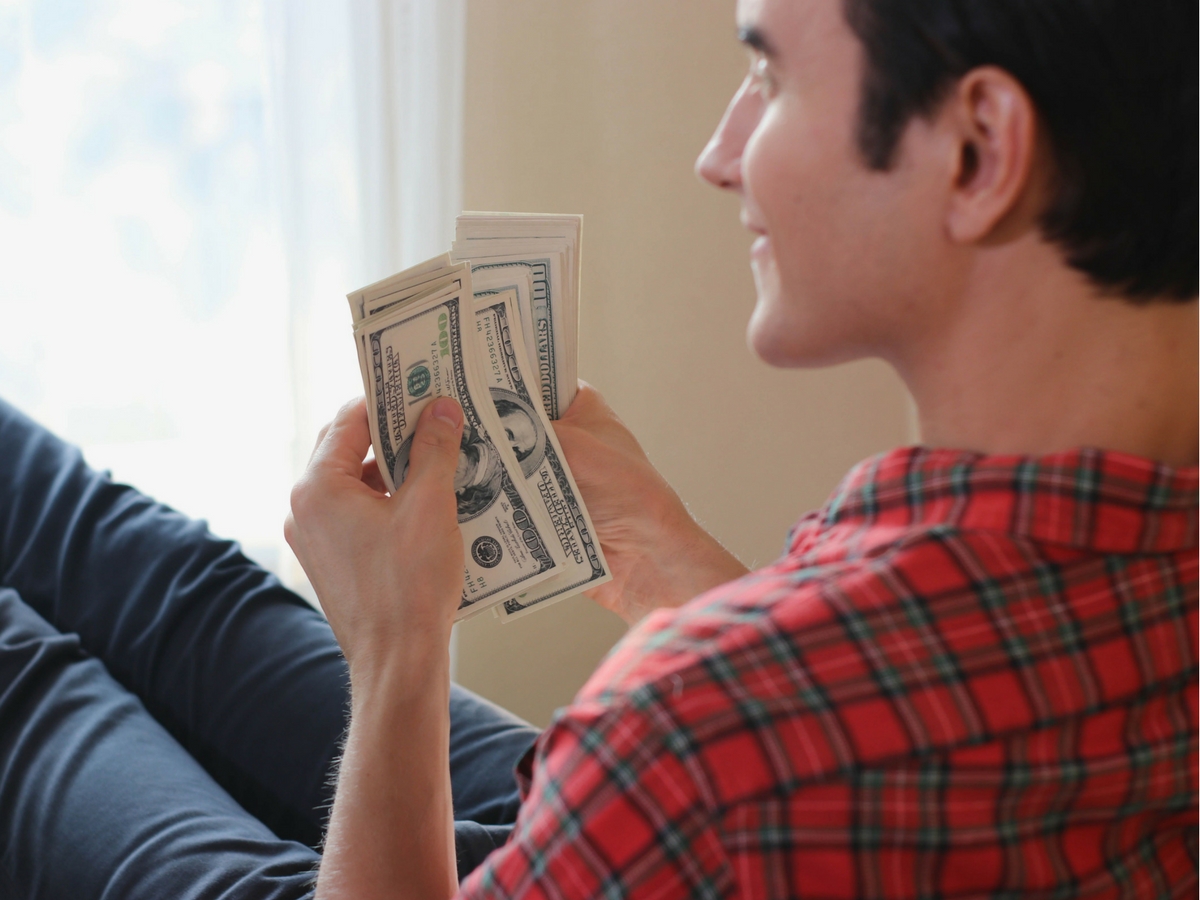 Kerry T. is surrounded by stacks of cash.

Neat little pillars lay to his left and right, and another pile of currency is spread out like a messy deck of cards at the edge of his desk.

He’s in the process of counting and strapping piles of bills, one after another, as they sail through the counting machine, collating them into quantities of $2,000 each. There was a time when the sound of that device humming away on his desk was beautiful music to the small-business owner’s ears. Every fluttering bill meant killer profits and expanding business.

But now, says Kerry, “All that cash on hand just stresses me out. The list of vendors I have to pay is a mile long. And paying them all in cash is like a fulltime job in itself.”

Kerry and countless other cannabis sellers — doing business in states where pot is legal at the state level, but still illegal at the federal level — are feeling this same type of bittersweet dread as pot profits soar, yet banks refuse to do business with them. Some small-business owners in the cannabis space are saying the situation can leave retailers with too much cash on hand that creates security problems, no efficient way to pay employees, and accounting nightmares.

At the core of the problem is cannabis’s continued designation by the US government as a Schedule I substance — thought to have no medical value, along with heroin, LSD and ecstasy. Due to this state/national paradox, most banks are cagey about offering services to cannabis sellers, fearing federal regulators may view the relationship as collusion with drug money.

It’s a problem with no easy solutions.

In Alaska, where weed was made recreationally legal via a 2014 ballot measure, cannabis testing lab Steep Hill shuttered its doors on March 31, with the lab explaining via an Instagram post, “Wells Fargo called in the loan on our building.”

The Instagram post went on to say that if the lab didn’t vacate the building, the bank was going to foreclose on the property.

A spokesperson for Alaska Wells Fargo explained to The Cannabist the financial institution’s policy, saying, “It is currently Wells Fargo’s policy not to knowingly bank marijuana businesses, based on federal laws under which the sale and use of marijuana is still illegal.”

The situation is maddening, as Steep Hill was providing a necessary public service to keep consumers safe from bad medicine. Steep Hill was just one of three state-sanctioned testing labs in Alaska, where all cannabis sold in the state is required by law to be tested for contaminants and potency.

In Illinois, the Chicago Tribune reported this month that the Bank of Springfield — the foremost bank serving many of Illinois’ legal medical marijuana companies — has announced it will discontinue working with cannabis sellers, and beginning May 21 will close their bank accounts. The move is almost certainly tied to the decision earlier this year by US Attorney General Jeff Sessions to rescind the Cole Memorandum, an Obama-era policy that discouraged federal prosecution of cannabis sellers operating legally under state cannabis laws.

“This is the closest we’ve been to being without banks in Illinois in this industry … which isn’t good,” Ross Morreale, co-founder of Illinois marijuana company Ataraxia, told the Tribune. “It makes everything more difficult.”

Without access to banking, cannabis retailers and licensed cultivators are left to deal mostly in cash, which can create security issues and logistical aggravations.

“How can I efficiently pay my vendors when it’s all cash money? I can’t cut a check or easily do a wire transfer without a bank,” Kerry tells Big Buds. “I spend a lot of my time counting out cash and writing up receipts for cash … and moving dollar bills around all over the place. It’s a real time sucker. It’s enough to make you reconsider doing business in the legal market.”

And that’s what Kerry may have to do to stay in business, he says — move back into the black market. “I was more profitable when I was a small-time cultivator,” he admits. “The headaches were way less.”

From a banking perspective, it’s a tricky matter.

That legal gray area could continue to be the stumbling block that inhibits smaller, cottage-level cannabis businesses from entering the market. That is, until the Schedule I designation is removed, which some players in the cannabis industry — including Kerry — think could be just a few years away from happening.

“Most of the country wants pot legal,” he says. “I’m hopeful that the feds will soon follow the will of the people and change scheduling. This banking thing, it is definitely the problem that most keeps me from success in this industry. If I was able to bank legally, I wouldn’t even consider operating in the black market.”

Want To Be A Professional Budtender? Here Are Six Things I Learned In Budtending School
It’s 420, And We Mean Business: Top Tips For Embarking On Your Exciting New Cannabis Career