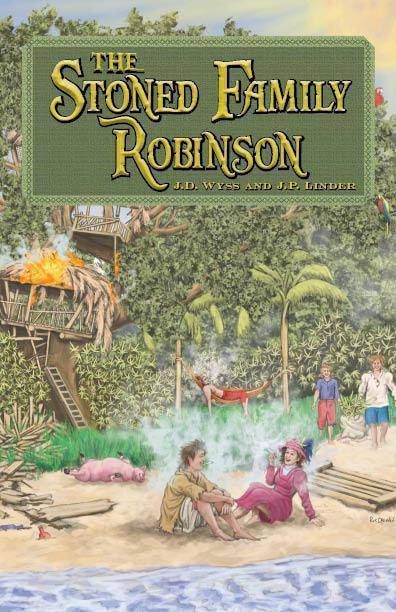 By Eva Stone | Published: July 18, 2011
Writer and filmmaker Joselin Linder is solid proof that functioning, professional women smoke marijuana—not just skater girls or chicks without jobs. And Linder has taken her taste for bud one step further as blogger for Celebstoner, penning columns on “How to Get High at the Royal Wedding” as well as her high-larious update of the shipwrecked family adventure The Swiss Family Robinson, aptly titled The Stoned Family Robinson. Let’s just say that in Linder’s version of the story, the family home is constructed entirely of weed and they make a bong out of a coconut.

“For many days we had been tempest-tossed—and our stash was soaked. Six times had the darkness closed over a gnarly scene, and returning light as often brought a renewed jones while the storm raged on and after seven days all hope was lost of finding that magical island to grow our free-range weed unnoticed by narcs.” – excerpt from The Stoned Family Robinson

Originally from Ohio, Linder now resides in Brooklyn and her previous books include The Good Girl’s Guide to Living in Sin, The Purity Test, and Have Sex Like You Just Met. Linder jokes that if you went to college with her, she probably wouldn’t remember you unless you were physically inside of the bowl of pot she was smoking. Here, the author discusses her latest book, being born high, and the time she got stuck on a mountain in Spain with nothing but marijuana to comfort her. Big Buds Mag: How did you come up with The Stoned Family Robinson? Why take on that story in particular to parody? Joselin Linder: Well, the title sort of sells itself. The fact is, I think The Swiss Family Robinson book has about four fans on Facebook because anyone under the age of 75 is not a fan. But if you’ve seen the movie or been to Disney World you sort of get that it’s about this family stranded on a desert island that build pretty much the coolest tree house ever and ride ostriches. I was told to use the manuscript of the original, but by chapter four I more or less dropped it, while attempting to stay true to the writing style. Then I did the only thing I could do—I built a tree house out of pot and I set it on fire. (And there are also ostriches…) BBM: What are some of the highlights of your weed-laced adventures that readers can expect to read about in your book? Linder: I am sort of into the love story between Fritz and this girl Jenny they find stranded on another part of the island. I also like the scene where the Robinson’s engage in this very complicated pirate attack using coconuts and string. It’s kind of hilarious. (Can I say that?) BBM: It sounds like your love affair with marijuana began at Tufts University. Talk a bit about your relationship with marijuana and how it has affected your quality of life and work? Linder: Well, pot and I have had a long and illustrious career—probably one of my best, if I’m being honest. Not to incriminate my mom or anything but I seriously might have been born high. I have a Gilmore Girls-level aversion to exercise, I’ve been known on more than one occasion to eat second breakfast, lunch and/or dinner and I’m pretty sure there’s a Whoville in my geranium. Add a pot brownie and that shit goes pretty much psychedelic. BBM: Do you get high before you write? Does it hurt/help/inform your writing? Linder: I tend not to get high these days before I write. This has more to do with the fact that I write from about 8 a.m. everyday, and not because I doubt the benefit of a creative high. The other thing is that when you write for your bread and butter (and seriously, that’s about it these days from the publishing world, a little bread and a little butter in exchange for a novel) you kind of have to be present to make sure you don’t accidentally kill a character off in one scene and then have them run out for bagels in the next. BBM: I was impressed by your blog on Celebstoner pairing members of the Arnold Schwarzenegger scandal with strains of marijuana like Chocolope, Brain’s Choice, and The Church. Did you do special research for that or do you just naturally know about all the ingredients in the strains available? Linder: Holy shit! Who knew there were so many nuanced variations on each type of plant? I pretty much thought there was like “schwag” and “kind bud” with the occasional “purple haze” thrown in for good measure. I had no idea that there were strains of marijuana that can actually play “Chop Sticks” and make dinner! As I was writing the book, this character Jenny sort of meets this completely blitzed out family and she doesn’t know much about pot. So she becomes the test subject, trying out every strain so that the family can document a person’s reaction to each one so that they can get the high they want when they want it. I think that’s around the time I became so fascinated by the individual strains. I seriously think someone needs to do this experiment for real some day. BBM: How do you prefer to consume your marijuana? Bong? Joint? One-hitter? Vaporizer? Edibles? All of the above? Linder: My boyfriend will be sad if I don’t mention that he makes really amazing pot brownies. But they kind of knock me on my ass. I like a joint. In Europe they mix joints half-tobacco-half-weed. When I was a cigarette smoker those were my favorite things ever! BBM: Would you ever consider getting a medical marijuana card? Linder: I don’t live in a state where that is an option. When I lived in California I dated a guy who got one. That was fun. BBM: Any immediate appearances or book signings or upcoming books to mention? Linder: I have a new website coming soon at JoselinLinder.com and StonedFamilyRobinson.com, plus I am blogging about once a month for Celebstoner.com so definitely look for that!

Jack Herer: The Man and The Marijuana
Top Tips For Keeping Your Marijuana Grow Room Clean