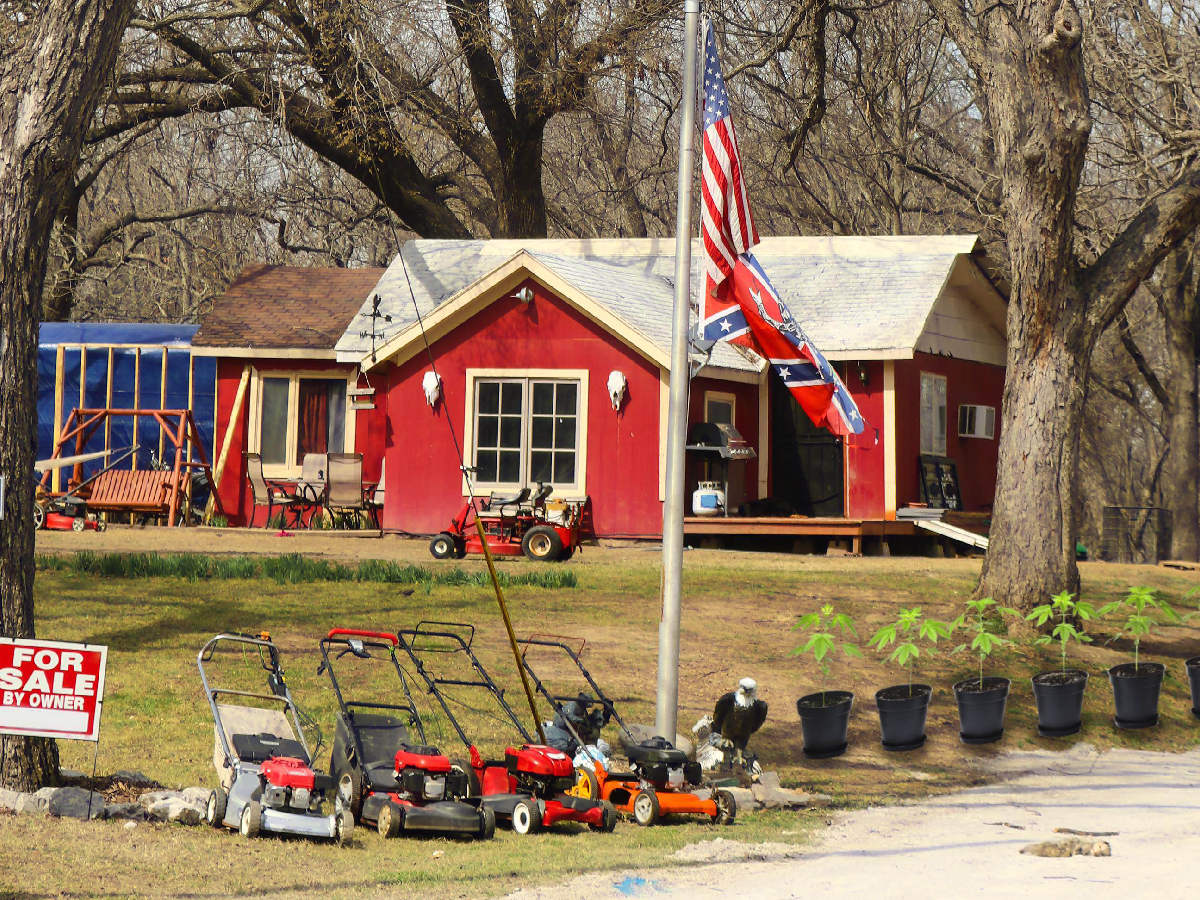 A bumper sticker on the minivan parked beside Marla D.’s house sums up the local political leanings in her upscale neighborhood.

Like most bumper-sticker proclamations, the message is simultaneously a pronouncement of steadfast personal beliefs and a stern warning to would-be offenders who might flout the moral rules.

In Marla’s little town, about an hour from the Kansas-Missouri border — a region of the US steeped in traditional views — there are two mindsets, she says: “Conservative and dead wrong. You can guess which belief my neighbor with that bumper sticker has.”

Marla wedges a small nugget of Girl Scout Cookies into a bright-pink pipe, lights up, and leans back into a cushy oversized Costco sofa. She personally grew her Girl Scout Cookies strain in a small, indoor cabinet cultivator that sits beside her washer and dryer in the basement of her home. None of her nearby neighbors know that she grows or smokes weed.

“At least, I don’t think they do,” she says with a smile. “But maybe they do and they’re just being polite.”

Try to have a conversation in this region of the US, says Marla, about more left-leaning individual freedoms — like pot legalization, gay rights, or a woman’s right to choose — and the discussion will almost always include some faith-based opposition, and probably a Bible passage to support it. A deep-red part of the country, this is the place where, recently, according to the Associated Press, lawmakers in Oklahoma and Kansas approved legislation to offer legal protections to faith-based adoption agencies that cite religious beliefs for not placing children in LGBT homes.

While Marla has lots of friends closer to Kansas City who smoke weed, the country club near her home prefers martinis and craft cocktails over pot. Bring up marijuana consumption in public here, she says, and many people will assume the worst of you. For one, you probably are not a good, God-fearing citizen.

“Apparently, God doesn’t want you to smoke cannabis by the way some people talk around here,” Marla says. “Even though it helps to heal a lot of sick folks, generally makes people happy, and is abundant like a literal weed. Shouldn’t that be the cornerstone of faith — to heal people and make them happy?”

Of course, Marla is not alone in her thinking. Look behind many closed doors in communities like hers — and behind closed doors all over North America for that matter — and a different story emerges.

While cannabis has for decades been on the religious-partisan hit list, beliefs about its potential as a healing agent are slowly changing across the nation and the world. “Reefer Madness” and the errant war on drugs are now threadbare ideas that are finally coming apart at the seams.

And while blue states are leading the charge with pot legalization efforts in the US, red states are also now amenable to weed legalization. Montana, Arkansas, Louisiana, Ohio, North Dakota — all red states with some form of legal cannabis legislation enacted.

In fact, recent news that the US Food and Drug Administration gave its stamp of approval for Epidiolex — a medication made from a compound found in cannabis called cannabidiol (CBD) — is very likely to have massive implications for federal legalization of cannabis across the US.

Produced by British drugmaker GW Pharmaceuticals, Epidiolex is proving effective at controlling seizures caused by severe forms of epilepsy, including Lennox-Gastaut and Dravet syndromes. The landmark approval by the FDA signals a significant change in governmental perceptions regarding cannabis acceptance.

Currently legal in a majority of US states for medicinal and recreational purposes, cannabis is at the same time illegal at the federal level and classed as a Schedule I drug, alongside heroin, LSD and ecstasy. If CBD receives support from the US Drug Enforcement Administration, which is set to make a ruling in the next couple of months, rescheduling of cannabis is likely and legalization in general will be viewed in a whole new light.

Because Americans love their legal pharmaceuticals almost as much as they love God and country, a doctor-prescribed medicine containing cannabis — one that is handed over to them by a smiling, white-smocked pharmacist at CVS — will no doubt be an overnight success.

Marla says she knows that’s coming and describes how she’s been using CBD products, particularly salves, for years, buying them in places like Colorado and Washington, where cannabis is recreationally legal.

“I’ve brought home loads of CBD rubs for myself and friends that I’ve picked up on trips to Seattle and Denver,” she says. “They’re great for aches and pains and swelling. I altogether stopped using Advil and Bengay and stuff like that because CBD really works for me.”

So enamored is she with cannabis as a medicine that last year Marla started hosting intimate get-togethers with friends at her house — she’s quick to point out her immediate neighbors don’t attend, but friends across town who are weed friendly do — to share her love for the plant. Calling the parties “Tupperware 420,” she passes along cannabis products like tinctures, patches and salves, and even shares her homegrown Girl Scout Cookies.

“The ladies all love our get-togethers,” says Marla, discussing her modern take on the Tupperware parties she remembers her mother and grandmother hosting when she was a child. “It’s a really fun way to compare and share. People love my Cookies, too, but I have to say that the CBD products, made from hemp plants, are always the party favorite.”

It’s not at all surprising that hemp-derived CBD products are now finding popularity in Middle American homes like Marla’s.

In neighboring Kentucky, another deep-red region, Republican US Senate Majority Leader Mitch McConnell has been leading the charge in his state for cannabis legalization in the form of hemp.

Because the hemp plant is a variety of cannabis with a legal designation of less than .03 percent THC — i.e., the psychoactive ingredient in pot — that varietal will not get you high like marijuana will. Many of the CBD remedies currently produced in the US are derived from the hemp plant, giving consumers a more user-friendly, non-psychoactive introduction to cannabis as compared to high-THC marijuana.

Oddly, conservative Kentucky’s history with cannabis goes back as far the 1700s, when the area was known as the “Hemp Capital of the World.” The soil there is perfectly suited for growing the plant. For many years, the US was the world’s leading producer of hemp rope and canvas material for sails, until 1970 when the Controlled Substances Act made all forms of cannabis — including hemp — a Schedule I drug and federally illegal.

Today, since the signing of the Agricultural Act of 2014, also known as the federal Farm Bill, which included an amendment allowing farmers to grow hemp as part of a pilot program, Kentucky is the nation’s main producer of CBD-rich hemp. Now, many thousands of acres that were once growing tobacco, soy and corn — industries hit hard by economic shifts of recent years — are being repurposed to grow hemp for CBD products.

“It’s no wonder that feelings in the middle of the country are softening with regard to pot,” says Marla. “Driving through some states, where corn used to grow, you now see cannabis plants!”

The American heartland is indeed changing in myriad ways where pot is concerned.

In conservative Oklahoma last month, nearly 57 percent of voters approved legal medical marijuana. And in neighboring Missouri, voters will likely have the option in November to legalize medical marijuana by ballot — that is, if the Missouri legislature doesn’t get there first in a bid to set the rules early for the industry.

Marla says she can’t wait to see all those red and blue states “lit up green.”

“The left and the right are really divided on a lot of issues right now, very alienated from each other,” she says. “I feel like pot could maybe bring us all a little closer together. Democrats and Republicans alike are soon going to see what a great plant this is. And what a healing plant this is.”

Genetically Blessed: Jinxproof Genetics Shows How Growers And The Cannabiz Can Do Their Bit For Charity
Cannabis Baby Making: Seed, Clone… Or Tissue Culture?