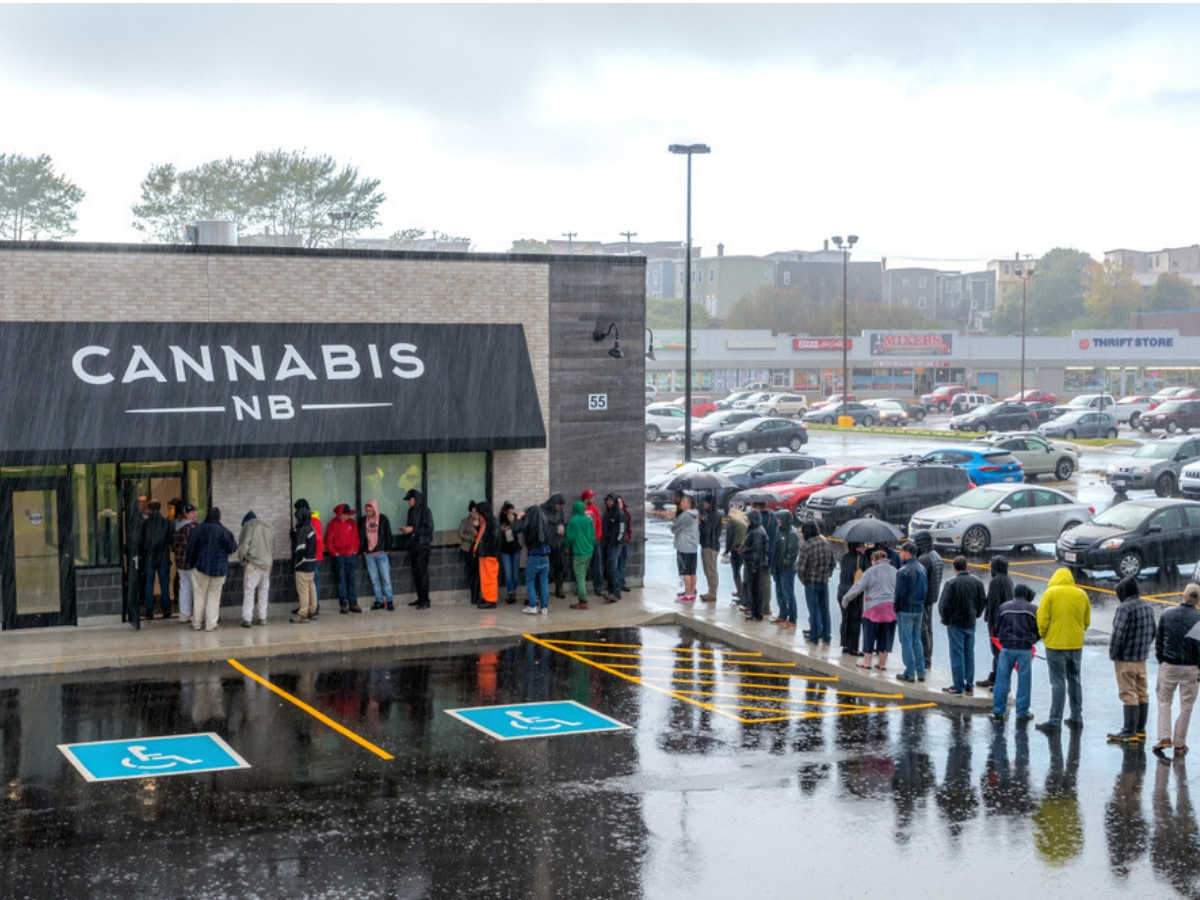 Saint John, New Brunswick: People waiting in the rain to purchase legal cannabis from Cannabis NB on the first day of legalization in Canada.
By Scott Oxford | Published: November 2, 2018

On October 17, Canada became the world’s first industrialized nation to legalize cannabis for recreational use, and only the second nation, after Uruguay, across the globe to do so. Industry experts say last month’s historic event is a forerunner of more widespread cannabis expansion to come, including in the United States, and subsequently, several other countries to follow suit.

But in the meantime, cannabis investors, activists and industry players alike from cannabis-legal states in the US are looking to Canada’s example for innovation and opportunity. And our neighbors to the north thus far have not failed to deliver.

Having formed in 2013, Hydropothecary began operations out of a 50,000 square-foot grow facility in Gatineau, before adding a 250,000-sq.-ft. greenhouse to its operation in late 2017. This year, Hydropothecary will complete a 1,000,000-sq.-ft. cultivation facility to meet skyrocketing demand sparked by nationwide legalization.

“It has really been that big,” Brown says. “We’re growing faster than we would have thought possible a few years ago.”

In the neighboring province of Ontario, Markham-based Canntab Therapeutics in October received a patent for Canada’s first extended-release technology on medical marijuana pills. Filled with several popular cannabinoids including THC and CBD, Canntab’s XR Tablets offer 12 to 18 hours of sustained relief. The XR Tablets come in doses of 2.5, 5 and 10mg.

Allowing more than 50 US-based cannabis companies to go public on the Canadian Securities Exchange has contributed to a growth of over 600 percent in Canada’s marijuana market over a three-year period, said cannabis specialist Vivien Azer, senior research analyst with New York City-based Cowen Inc. Over that same period, the S&P/TSX Composite Index, which tracks the stock performance of more than 200 of Canada’s largest public companies, rose 11.2 percent. Needless to say, cannabis stocks have been one of the most reliable Canadian investments over the last three years, drastically outperforming other industries.

A May 2018 report, titled Cannabis: Almost Showtime, by the Canadian Imperial Bank of Commerce’s (CIBC) Institutional Equity Research team predicted that total cannabis retail sales in Canada will be worth $6.5 billion by 2020. Comparatively speaking, the legal market in the United States was worth $8.5 billion last year, and is could be worth $50 billion annually by 2025.

In Las Vegas, business partnerships with Canada’s new legal industry have extended into higher education and research. While cannabis remains federally illegal under US law, one Canadian marijuana startup and a prominent US university are taking creative measures to explore gray areas not explicitly prohibited by law.

In July, Ontario-based Rapid Dose Therapeutics (RDT) signed a research agreement with University of Nevada, Las Vegas (UNLV) researchers Dustin and Rochelle Hines for the company’s QuickStrip oral thin strip products to be exclusively tested in Las Vegas. Under terms of the agreement, the Canadian-born and educated Hines are researching the comparative benefits of administering prescription drugs and cannabis products via fast-dissolving film strips on a person’s tongue, compared to more traditional consumption methods like pills, liquids and injections.

Jason Lewis, RDT’s senior vice president of business development, believes QuickStrip will prove to be the most efficient — and discreet — way to ingest cannabis. But because UNLV can’t legally research cannabis due to US federal limitations, the professors are testing the QuickStrip products with caffeine.

“We believe a majority of marijuana, when digested in other ways, is eliminated through a person’s metabolism, their stomach, their gut and their liver,” Lewis explains. “When you take a QuickStrip and put it under your tongue, it absorbs directly into your bloodstream.

“If the research showed the product is effective with caffeine, we believe we’ll see the same perks with cannabis,” he adds.

Initial UNLV research projects featuring QuickStrip have in fact found caffeine to absorb nearly twice as fast with oral thin strips as when swallowed, Lewis says, giving the company the confidence to market its edible strips to more than 50 legal dispensaries throughout the Las Vegas Valley. RDT’s research agreement with the university does not have an expiration date, and Lewis says he hopes the UNLV research duo will continue to work with the company for “the foreseeable future” to produce QuickStrips with ideal THC and CBD combinations to treat a wide range of illnesses.

Hines and Hines did not respond to several requests for interview, but provided a brief statement affirming their belief in the future of cannabis as a federally legal substance.

“We hope to set a baseline for research that improves digestion of medicine,” the statement reads. “While we are not involved in cannabis research at the present time, we would be prepared to begin such research if and when it is permissible by United States law.”

An October Gallup poll found two-thirds of Americans now support legalization of the plant, an all-time high. Azer of Cowen says that “everybody” in the cannabis industry will win as the plant gradually becomes more widespread.

“There’s definitely long-term investment potential in both Canada and the US,” Azer asserts. “The question is, whether buyers of marijuana stocks are artificially pushing its current ceiling.”

Interviewed experts warned while cannabis is the hot investment in Canada, it still may be overvalued. Of the $6.5 billion that legal cannabis is expected to generate in 2020, authors of the CIBC report said only $1 billion will be retained profitably. The lion’s share of the rest — as much as 70 percent — will be paid in taxes to Canada’s provincial governments.

Tom Adams, editor-in-chief for Arcview, an Oakland-based company that researches the cannabis industry in the US and Canada, says the high stock valuation of cannabis is “speculative at best.” He cited Ontario-based medical marijuana corporation Canopy Growth as an example. With income at just over $100 million, the company has already reached valuations of more than $10 billion.

“It’s a little inflated at this point,” Adams explains, “But it’s eventually going to come back down to earth. We’ll get to a reasonable point of higher investment, but much of that depends on when the United States makes cannabis federally legal.”