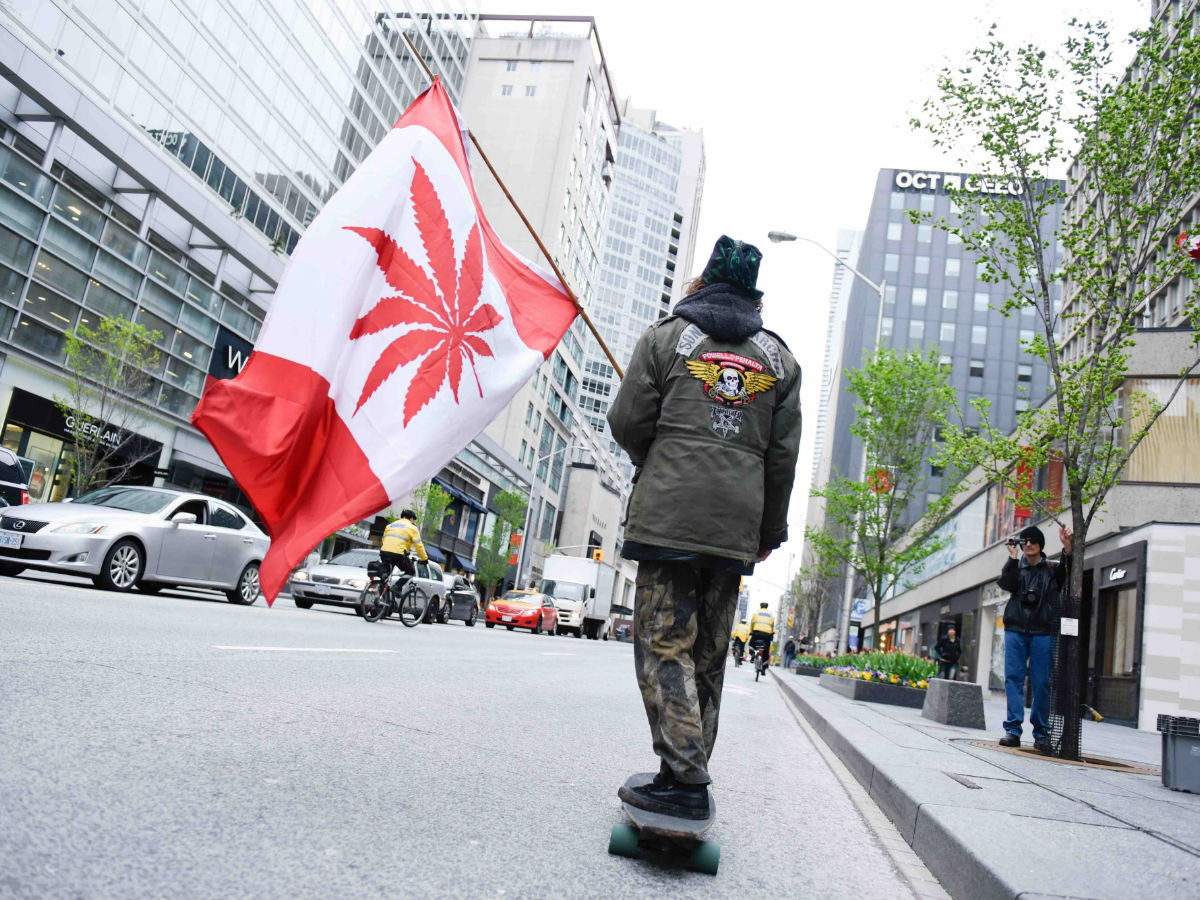 Once upon a time, Canada’s black market and Northern California’s Emerald Triangle made up the largest chunk of the cannabis consumed in North America.

BC bud, as it was then commonly known, was the most sought-after marijuana product in Canada and the US. Grown indoors and outdoors in British Columbia, fortunes were easily made in the 1980s and into the early 2000s by black-market growers and smugglers alike. I lived in the Vancouver area at the time and the effects of the black-market cannabis industry were visible everywhere.

In those days, when you wanted to buy or rent a house, the realtor who was showing you the premises would bring you to the basement and say things like, “Notice it already has its own plumbing, water supply, drainage, reverse osmosis, and high-capacity electrical panel.”

It was an acknowledged, only slightly covert fact that marijuana money was great for realtors, home sellers, hydroponic stores, salespeople of luxury items like cars and jewelry, and the general Canadian economy.

For most of this boom era of Canadian cannabis, in British Columbia the penalties for growing and selling weed were wonderfully lenient. Growers caught with hundreds of plants would get off with probation and an expunged record after probation completion. In most cases, only if your grow op was involved in smuggling deals that sent tons of Canadian bud south of the border in exchange for guns and hard drugs like cocaine, or if you had a chain of grow houses that were too big to ignore, did you face the threat of serious prison time. And even for the biggest cannabis kingpins caught with guns, cocaine, and millions of dollars in real estate, cash, grow ops and weed, prison sentences were at most five years for what in the US would have been a life sentence.

Canadian Provinces Set Their Own Rules Regarding Recreational Cannabis

That was then and this is now, and as of today, October 17, 2018, under the leadership of Prime Minister Justin Trudeau and his centrist Liberal Party, Canada has federally legalized cannabis growing, possession and selling. However, the devil is in the details, because the federal law agreed upon by Trudeau and the Parliament of Canada allows each of the 13 Canadian provinces to set their own rules, as long as those rules don’t inordinately infringe upon federal legalization.

According to the official government website of British Columbia, the rules for that province’s Cannabis Control and Licensing Act are as follows:

To make things all the more confusing, those aren’t the same rules you’ll encounter in other Canadian provinces. For example, British Columbia allows citizens to grow a maximum of four plants, with restrictions, while Quebec and Manitoba allow no home growing at all.

Where Will People In Canada Legally Be Able To Purchase And Consume Cannabis?

In some provinces, like Ontario, you can buy cannabis from government-approved private retail stores, whereas in Alberta and New Brunswick, you can only buy from government growers via online government stores.

Additionally, there are currently no licensed cannabis consumption lounges or coffee shops anywhere in Canada, although the federal government hasn’t ruled these out for the future — however, it is up to the individual provinces to move forward on this legislation, and none have done so as of yet.

Marijuana consumption is prohibited anywhere tobacco use is prohibited, even when it comes to vaping, which has been shown to reduce the risk of second-hand smoke. Few provinces allow cannabis smoking in public places, with some severely restricting where you can consume cannabis.

In British Columbia, the rules include a clause whereby landlords are allowed to evict tenants who smoke or grow cannabis on the premises, even if they do so legally. While there are 420-friendly hotels and private vacation rentals in BC, there are also hoteliers and landlords that can ban cannabis consumption at their discretion. However, while landlords in BC can ban or evict tenants from growing and consuming cannabis on the premises, the exception to this law is those who consume or cultivate federally authorized medical cannabis for personal use.

Initially, only buds, CBD oil and cannabis seeds are legally allowed for retail. No concentrates including dabs, kief and bubble hash, or medibles, edibles, tinctures, topicals or drinkables are legal in any province until late 2019 at the earliest — and again, each province gets to make its own decisions regarding such products.

And while cannabis affects everyone differently, there is currently no reliable test or subjective evaluation to determine whether a person’s driving is harmfully impaired by current or recent cannabis use.

However, in the province of BC, police officers designated as so-called drug recognition experts have been given the power to arrest someone for drugged driving without any objective evidence that the person has consumed cannabis or that their driving is negatively affected. This kind of opinion-based interdiction is rife with abuse, and is harsher than what drunk drivers contend with.

Further prejudice against the cannabis community is evidenced by Canada’s federal and provincial rules that severely limit the type and scope of cannabis advertising. These limitations are much more restrictive than what alcohol manufacturers and retailers face.

How This New Legal Industry Could Affect The Economy

Economists suggest that Canada’s legal cannabis industry could eventually be a multibillion-dollar economy, with cultivation and sales of domestic cannabis and international exports creating huge profits and tens of thousands of jobs.

A glut of former black-market cannabis growers and sellers in Canada have jumped on the legalization bandwagon, going to work as consultants or as full-time employees of licensed commercial producers.
Many financiers and entrepreneurs who have entered the newly legal cannabis industry in Canada are clueless when it comes to growing, processing, retailing and consuming cannabis, which is why some licensed commercial startups have actively recruited experienced professional black-market growers, offering generous salary packages to cultivators who are adept at running large, high-tech commercial indoor grow ops.

While the new laws in Canada don’t include a clear limit on how much THC can be sold in legal dried flower, there are strict rules when it comes to the potency of other cannabis products. For example, products that are administered orally or topically are to have no more than 10 milligrams of THC. For this reason, many Canadian growers who choose to remain in the black market aren’t worried about competition from government-licensed weed and licensed private producers.

“We’re growing better strains. We know how to grow because we’ve done it right for years. We’re making dabs and concentrates. Our prices are better. Our strains are more in line with what people want. New consumers who don’t know what good weed is will go to the legal stores and buy legal weed. But connoisseurs will continue to buy black market,” predicts one of my Canadian black-market grower friends, who has chosen to remain anonymous.

Anticipating that many black-market growers and sellers will continue to operate outside the newly legal market, in September Trudeau made moves for his government to rev up its war on drugs, with the prime minister having cosigned Donald Trump’s Global Call to Action on the World Drug Problem. This document pledges that law enforcement will spend more time cutting off “the supply of illicit drugs by stopping their production, whether through cultivation or manufacture, and flow across borders.”

The rollout of Canadian legalization is a phased approach that has so far been hampered by delays from provincial governments, so we likely won’t know until the end of 2019, or possibly 2020, how well it has worked. There will undoubtedly be lawsuits and actions that challenge and/or change how provinces interpret federal legalization and implement local regulations.

The bottom line is that it depends on your place in the cannabis growing and supply chain, as well as your geographic location in Canada, whether you think legalization is a blessing, a curse, or both. The glory days of BC bud smuggled south and selling for USD$3,500 per pound are well and truly over, but black-market growers and sellers in Canada are standing strong, despite the passage of Trudeau’s wonky laws.

Mixed Greens: How To Grow More Than One Cannabis Strain At The Same Time
Get The Sleep Of Your Dreams With These Tried And Tested Nightly Cannabis Routines