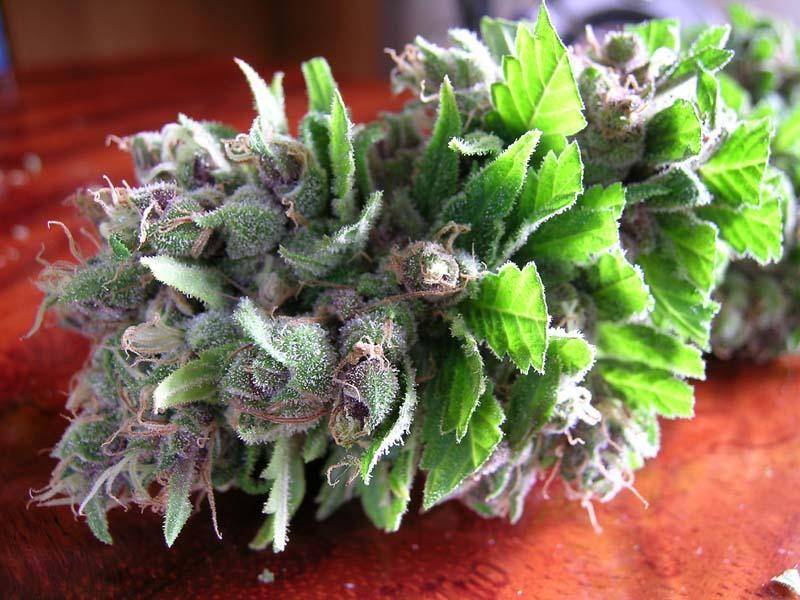 By Subcool | Published: June 27, 2011
In the last 25 years, I have collected and grown-out hundreds of strains of medical marijuana. I have traveled to Holland and attended the Cannabis Cup seven times. I’ve also lived in Amsterdam. One thing I still believe is that the best Cannabis in the world is in North America, in some unknown garden belonging to someone who keeps to themselves.

We have been lucky enough to collect some amazing examples. Some of my all time favorites are Genius and Apollo-13 by Brothers Grimm, also Killer Queen and Space Queen by Vic High. Our most potent strain is Jack’s Cleaner, a Pluton x LambsBread x Purple Haze freak, which can literally make a non-grower puke if they’re not used to her brutal raw potency. We call it the “they’re coming to take me away” stone.

Now, MzJill and I continue this tradition working as a team. She has some of her own favorites as well. The Black Russian strain that gives all of our Sputnik crosses their insane purple coloring came from MzJill via Nebu. Over the past five years, we have worked with these crosses to create new and interesting varieties. MzJill comes up with her own crosses using her favorites and even helps me pollinate when the males are ready. We would like to share with you a little of what goes into breeding a new strain.

Breeding has many complexities that I won’t begin to try and explain here today. But I think our main goal was very simple, to combine an extremely potent Sativa hybrid with a heavy yielding, ultra purple strain. The results would be a purple strain with the potency added from that parent.

What gets tricky is that many strains, like G-13, are extremely dominant and can take over a cross. When you cross BlueBerry and G-13, usually you just make a nasty tasting, watered down version of both. This doesn’t mean that there are not good Blueberry G-13 crosses; its just breeding is not as easy as 2+2=4.

There is also a big difference between “breeders” and “seed makers”. Anyone can take a male and pollinate a female. This is not breeding; it is making copies with large variations. Again, if they’re sold cheap, a winner can still be found if enough seeds are grown out. The difference is the selection process of the parent strains.
The Mamas and The Papas

Selection of the mother plant (or P1) was easy. Apollo-13 is in the top three of my favorite strains and I think it may be the most unique strain we have. It blends potency and a bizarre and putrid rotting-fruit smell that make it a one of a kind. Selection of a male Black Russian was not as easy. The first mistake people make in selecting a male is by choosing the most vigorous. Remember those complexities I mentioned earlier? Well, the recessive drug traits we seek are stashed away in non-vigorous males.

Think about the plant in the wild, the natural progression of Cannabis is back to Hemp. The strains we have today are a direct result of human intervention. Robert Clark says it better:

“In the wild, the early males always win the breeding contest. Without proper selection, these early males cause ‘acclimatization’ of the variety, and a decrease in drug quality.

This is the ‘dominant’ state of Cannabis. If it were otherwise, why would we need breeders? All you would have to do is let the plants do their own thing and they would become more potent over time, but they don’t. The only way marijuana varieties ever get better is through human intervention in the natural order.”

So, in order to find these recessive traits, we choose males based loosely on the following:

– At time of germination, are there any capitate trichomes on the cotyledon leaves?
– What is the number and frequency of non-glandular trichomes (this can be a great indicator of future glandular production).
– The earliest males to show sex get tossed, no ifs, ands or buts.
– Dominant males are useless for drug (misuse of this rule has caused more hermaphrodite strains than the world deserves)

If these basics are followed during each male selection process, then this gives us a much better chance of finding the genes we want. This is not meant to be a guide for anyone, just a basic explanation of what a Cannabis Breede” looks for when selecting strains to work with and/or improve upon.

Sometimes taste is the desired goal, or maybe potency. I have taken cherry flavored Ortega and crossed it with Killer Queen to create a cherry phenotype called Danny Boy. Danny Boy is done in 48 days and the taste is like cherry candy. The famed Jack’s Cleaner was crossed with a BlueBerry to create Batgirl, and then JCB males from that cross have created entire seed companies. Our JCB male has blue pollen sacs and drips with resin.

Also in the works is an Orange Velvet x Space Queen that will be our first Pineapple-Orange offering. This is MzJill’s creation, so we have named it JillyBean. Orange Velvet is a PNW strain obtained from “some hippies” as the story goes. Our goal is to create badass strains that we want to grow out and smoke ourselves. Once breeding pairs are selected, they are sent to BadBoy to replicate successful crosses or create insane new things, like BadBoy’s Astro Boy (Apollo-13 x Ortega C99).

Once we had the Black Russian x Apollo-13 cross complete, we gave it a name. Sputnik seemed like a logical selection and I think you can see we were beyond successful. We grew-out several seeds and we found that basically we get two different phenotypes. The first is an eye-candy lady that you see so much of, starting with Pink Calyx and just oozing resin; we knew instantly we had achieved our desired results. Smelling like Blackberry jam and swelling to a wonderful large cola-covered-THC-factory. I will never tire of photographing this girl. At 4 weeks the pink stared changing to a magenta color, and even the trichomes took on a pink to purple coloring. This particular phenotype, we gave the name Pinky.

The other phenotype (Whitey) was a surprise to me and also a valuable learning experience! Whitey exhibited no purple coloring. In fact, the plant was ultra-white and during flowering, she almost smelled like a “blue cream soda.”

As the plant matured it took on a weird pungent smell and before it cured out a bit, MzJill and I both thought it smelled pretty foul. After about two weeks of curing, I decided to give it another chance and it knocked my socks off. A grower friend who sampled it said it almost gave her visuals. So we knew the cross had potential. Now how to improve on her again?
Back Crossing

The concept of back crossing is simple in theory, you only pollinate to your P1 mother plant using sibling male offspring. Selecting a male from the Sputnik 1.0 cross, we then pollinated the Apollo-13 sugar mom, using a male selected by the criteria explained above. The first cross can be explained as a 50/50 and the second a 25/75 with 75% of her make up coming from the Apollo-13 mother. That 75% cross, or Sputnik 2.0, is now complete and ready for the final stage.

The seeds arrived at Dr Chronic’s on 4/20, and are now available to the public. The great thing about using this breeding method is you don’t have to stop at three crosses; you can always do it again and see what happens. We have a different plan though.

Once Sputnik 3.0 is complete, we will then grow out 100 seeds and select 10 males and 10 females. The best will be used to create “Cubed” Apollo-13; these seeds will be stable and extremely valuable, representing thousands of hours of work. These seeds can be used to create true breeding IBL’s, or used to find more P1’s for future breeders to incorporate into there genetic pool. TGA and Subcool will continue to strive for the best in new crosses and the search for recessive genetics.