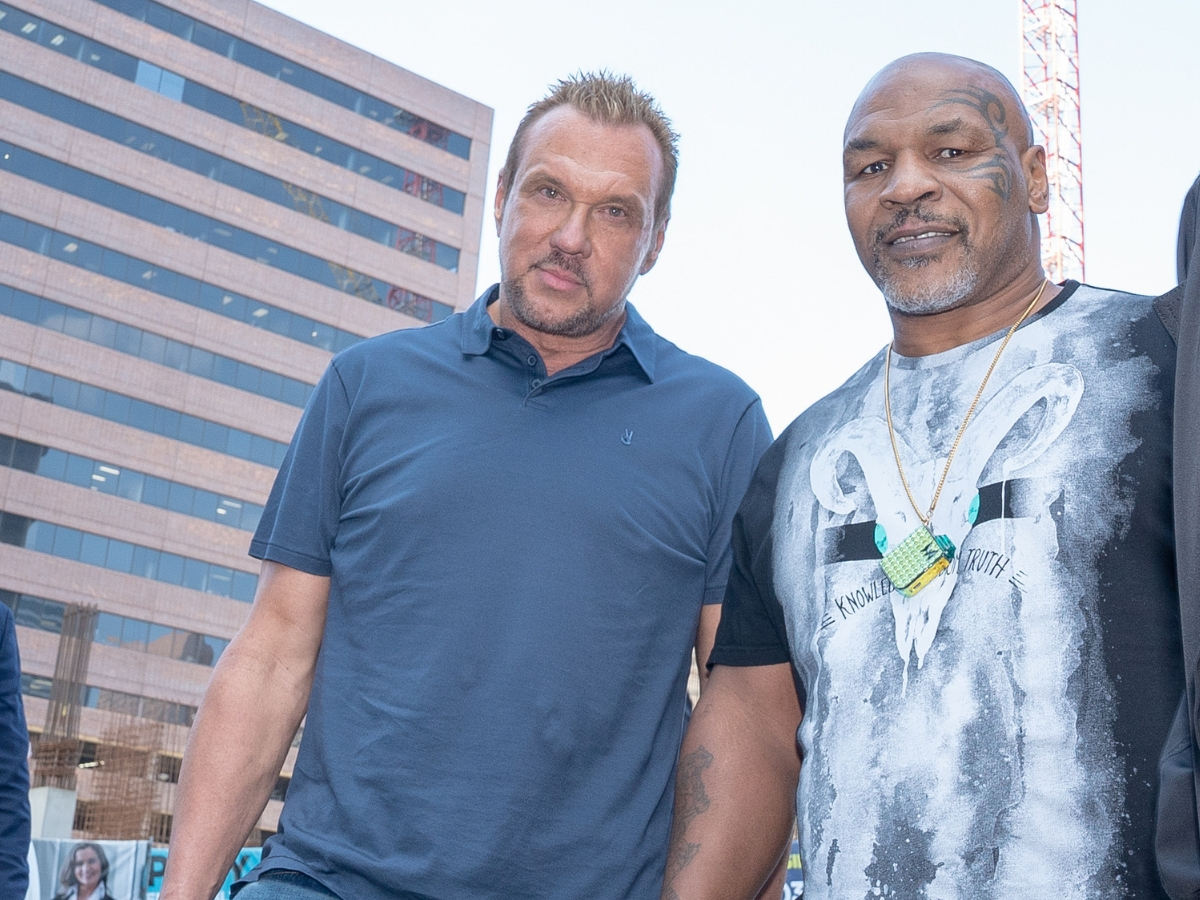 The two were snapped by the paps at TMZ Sports as they exited a building in Downtown Los Angeles, having just finished a recording of BigMike’s podcast Business Outlaws, which aims to teach millennials the mindset and tools they need to become millionaires.

As a special guest of BigMike and co-host Chris “Bulldog” Collins on Business Outlaws, between generous puffs of BigMike’s Blends and Tyson Ranch, Iron Mike opened up about a range of topics, including his boxing career, transition into business, launching his own cannabis brand, his adventures on the silver screen, and his life growing up and how it differed to that of his kids.

Never one to miss a moment to talk about the positive therapeutic effects of medical marijuana, BigMike told TMZ, “[Boxing champion] Floyd [Mayweather] should definitely be smoking Tyson Ranch weed, I can tell you that.” Tyson laughed in response, “He’s not smoking it!” to which BigMike asserted, “He should start, then!”

And who wouldn’t trust a review from BigMike, the king of cannabis, a true connoisseur of all things weed related?

So, what is Tyson Ranch exactly?

It’s a major component of Iron Mike’s Tyson Holistic, the retired pugilist’s umbrella corporation comprised of weed-related businesses including consumer products, licensing and real estate. Tyson Ranch is the 40-acre cannabis destination located about 100 miles north of LA in the Mojave Desert that will consist of an amphitheater, edibles production and extraction facilities, an on-site dispensary, and luxury camping grounds. The weed resort will not only be a haven for cannabis enthusiasts, but also a cultivation farm that grows a range of premium bud — using BigMike’s own Advanced Nutrients products to achieve big, potent Tyson Ranch-branded buds, naturally.

Telling TMZ about his favorite strains produced by Tyson, BigMike said, “His KO Kush is great. His Jellybean is great, we were smoking it in [the podcast]. We just got done doing the Business Outlaws podcast … and I’m gonna be on his show tomorrow.”
The show that BigMike is referring to is Tyson’s own soon-to-be-launched podcast Hotboxing, in which Iron Mike and his co-host, retired footballer turned cannabis advocate Eben Britton, discuss cannabis and sports.

Britton, in his post-football career, has fought tirelessly to have cannabis removed from the list of banned substances in the NFL. Having been open about his own cannabis consumption to control the pain he’s endured as a result of his sports injuries, Britton has spoken out about the dangers and health risks associated with opioids and pharmaceutical painkillers, and that athletes should not be punished for seeking a natural therapeutic alternative.
“You know, I’ve been fighting for over 20 years and I have so many aches and pains. If I didn’t have cannabis, I don’t know what would have happened,” Tyson said earlier this year at the launch of Tyson Ranch.

In a suggestion that full-contact sports like MMA and boxing are leading the charge when it comes to allowing medicinal marijuana as part of an athlete’s training and healing, Tyson said of former UFC champ Conor McGregor, “Hey, McGregor’s a good guy, he liked our Kush, and I’m very grateful for that. … He’s a good guy [to smoke with].”

Finally, when probed by TMZ about his future plans for his new cannabis venture, Tyson was forthcoming — albeit decidedly intoxicated: “I want to captivate the world, be the biggest company in the world,” to which BigMike interjected, “Tyson Ranch brand, you should try it, it’s excellent, and he gives back to the community, which I like.”

Stay tuned for more details on when Tyson Ranch will open to the public. Tyson Ranch bud is currently available at select dispensaries in California. For more information, visit Tyson Ranch.

To listen to Business Outlaws, head to iTunes, Stitcher, or wherever good podcasts live.

Will Thailand Become The First Nation In Asia To Legalize Cannabis?
Mexican Supreme Court Declares Cannabis Prohibition Unconstitutional: Is Legalization On The Horizon?