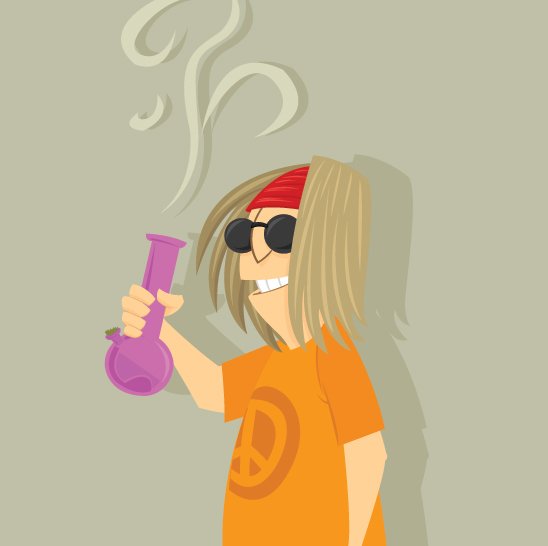 Before I gave up smoking my marijuana using combustion with joints, bongs, and pipes, and converted to vaporizers, I went to a local “head shop” and spent $345 on what the retail girl told me was a “one of a kind American-made glass hammer bubbler.”

It was a beautiful piece and I looked forward to smoking kind marijuana and enjoying the colors.

But when I got it home, rinsed it with alcohol, filled it with water, packed a bowl of sticky Girl Scout Cookies and applied flame for the first time…the pipe cracked and fell apart.

I gathered up the pieces and brought them along with my receipt back to the smoke shop.

That same dreadlocked, patchouli-smelling girl who had openly discussed marijuana pipes with me when I was purchasing the piece (after I had showed her my medical marijuana card) now said:

“We can’t have you bring that into the store. It has illegal residue on it.”

I showed her that the bubbler was broken, left with it and stashed it in my car, then went back to the store expecting a full refund, or at least an exchange.

“All sales are final,” the girl said.

Her statement was in direct contrast to what she’d told me before I bought the glass:

“No worries, we back everything we sell. If there’s a problem just bring it back.”

I realized immediately that I was dealing with a ripper, but tried to stay kind and patient as I asked her to contact the store’s owner. She refused to do so.

I asked her to explain how the store could sell me defective glass and not back it up when it failed.

She was snarky and dismissive as she said: “Any time you buy drug paraphernalia you should realize it’s an underground transaction. There are no guarantees at a head shop.”

Later on, I tracked down the store’s owner. He looked like a guy from Sons of Anarchy. And he was even more rude and stupid than his employee had been.

After that rip-off, I began investigating how smoke shops and head shops treat marijuana customers. The result is this article, in which I’m giving you the heads up on head shops and smoke shops…

Unlike a regular retail store in which you know ahead of time that defective products are going to be refunded or replaced, head shops and smoke shops rarely if ever back their products.

You’d be lucky to get an in-store credit at most smoke shops and head shops.

Not only that, but if you pay using credit card or check instead of cash, the head shop or smoke shop knows who you are and can use that against you.

Two of my marijuana-growing associates told me that when they had big-money disputes with head shops, the store people implied that narking the grower could be an option unless the grower just shut up and went away.

Almost all head shops and smoke shops claim their marijuana-inhalation merchandise is made in the USA or Canada, but a very large percentage of pipes, bongs, and bubblers are made using sweatshop labor, dangerous materials, and bad manufacturing practices…in impoverished foreign countries.

Not only does this result in inferior merchandise that breaks or is otherwise defective even when you use it properly, it endangers your health because toxic materials, plastic off-gassing, and shards of glass can negatively affect you when you’re using these inferior items.

And you NEVER want to use a plastic, wood, or metal item to smoke marijuana. They’re not safe for your health.

You really can’t trust that the store personnel or the store itself are safe for you, especially if you’re growing marijuana so that a police visit to your home could be disastrous.

This warning also applies to online paraphernalia stores—if there’s a dispute and they want to mess with you, just remember: they know your mailing address.

Other than just go back to smoking joints and not using pipes, bongs, bubblers, vaporizers and other stuff you can only buy at head shops and smoke shops, how can you protect yourself?

Start by asking the store their policy on returns, refunds, exchanges and defective items. Also ask for proof that their glass is made in North America by glass artists, not mass-produced domestically or abroad.

Make them provide you contact information for the glass artists, or the product distributors, so you can do further checking.

If they verbally state to you that something you’re buying can be returned for a refund or exchange, ask them to write that on the receipt.

If they claim an item is North American-made, made by a specific glass artist, or other details, make sure they write it on the receipt.

Whatever you’re buying, carefully examine it before you purchase. If it’s an appliance like a vaporizer, plug it in and test it before you fork over your $$$.

If a store says they offer no refunds or exchanges, realize that any money you spend there could be totally a throwaway. Do you really want to buy that $300 vaporizer or that $400 glass, knowing that as soon as you’ve paid for it, if it doesn’t work or is otherwise defective, you’re out of luck?

Check with Better Business Bureau, Yelp, Google, etc. to see if the store has complaints against it.

Talk to other marijuana growers and users about the quality and customer-centeredness of head shops and smoke shops where you live.

If you feel safe using a credit card, purchase with a credit card that has a built-in dispute function so you can challenge a transaction if the store sells you a bad product and refuses to refund it.

Don’t put any marijuana in your pipe, but test it first with flame and some loose tobacco. That way if it breaks, the store can’t hide behind the “We can’t take this back, you used illegal substance in it” excuse.

If the store rips you off, warn other people about it by posting negative online reviews, filing complaints with the Better Business Bureau, and by providing warnings to others in the marijuana community. Organize boycotts of shady smoke shops.

Hook up with solo or collective marijuana glass artists; get to know them so you can understand what it takes to make quality glass pipes, bongs, and bubblers.

It’s best to have a glass artist make a piece personally for you, so that you know the artist’s skill, materials, and integrity.

Because the marijuana and marijuana paraphernalia industries operate in a grey area with few consumer-protecting regulations, it’s easy to get ripped off…whether you’re buying marijuana seeds that turn out to be bad genetics, or expensive glass that turns out to be imported, defective crap.

There are of course ethical head shops and smoke shops, and it’s true that a few pot smokers drop their glass on the floor and then go back to the head shop looking for a refund.

We also understand that government regulations make it hard for head shops and smoke shops to stay in business.

But there’s a sizable percentage of outlaws, thieves, and jerks who’ve opened head shops and smoke shops so they could make an easy profit off of our marijuana community.

Their no-returns/all sales are final/tobacco-use only policies are there to protect their profits. Those unscrupulous scammers really don’t care if we’re satisfied or not. They don’t care that they’re selling overpriced, defective glass made by slave labor using inferior materials and manufacturing processes.

All they care about is taking our money.

Let’s all stand up for our rights, shut those rippers down, insist on quality, safe, domestically-produced marijuana-smoking paraphernalia, and customer-centered head shop policies. When our marijuana community boycotts the bad stores, they will soon go out of business, and the quality head shops will be rewarded!