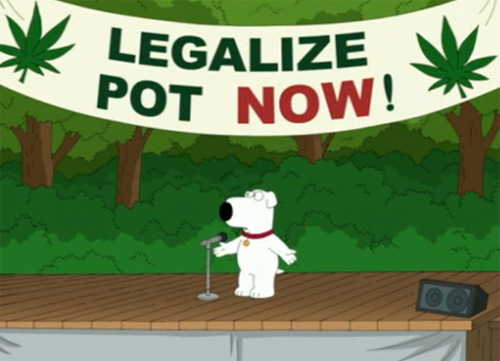 You don’t need to wonder what would happen if Brian Griffin was the only person, or should I say dog, responsible for the legalization of weed. However, Brian advocates for that and tries to get his point across in his own weird doggy way. Thank God Stewie is right there to point out that a little showmanship would make things better…

Goofy Smokes Marijuana! Do we need to add anything else to that?

A whole lotta shit is going down on this 4th episode of StoneTown! Party Monster, Sheriff Joe and the Tar Heads, along with Jimmy Spliff, get crazy out of control on this time, followed by Chronic X and his super-secret at the end! ”

KATT WILLIAMS – WEED’S NOT A DRUG

There is a chemical in weed called “Fuck it!” and if you just get that it in your system it will change your life…

CHEECH AND CHONG ANTHEM – WEED ARE THE WORLD

Randy Marsh tells his son the truth about marijuana…

This guy claims that all of the characters in this film are fictional … Can you believe that?